Speed, portability, power… pick two. When it comes to strobes, that’s the game you have to play. But maybe not anymore. Priolite’s new Ultra monolight promises all three in a single package they believe will “blow your mind.”

If you haven’t heard of Priolite, don’t sweat it. The company has only been around for six years. But if their newest experiment is as big of a hit as it promises to be, you may be hearing a lot more about the.

The Priolite Ultra is named such because it’s “ULTRA portable, ULTRA powerful, ULTRA versatile, and ULTRA compact.” In fact, they’re calling it:

…the smallest metal frame, metal hardware, metal mount, Li-Ion powered, 500Ws strobe with built-in 2.4GHz wireless, 220 full-power flashes per charge, and the ability to sync to most Canon, Nikon, Pentax, and Sony cameras at up to 1/8000th shutter speed, and at any power setting.

Here’s a quick Kickstarter intro (skip to 2:30 to get to the part that’s actually about the light):

As the video explains, it’s the size of the Ultra that makes the Ultra … well … the Ultra. They’ve managed to squeeze all of Priolite’s most popular features into a much smaller package.

One of the most intriguing of these is a technology Priolite debuted in 2012 called HotSync. Hotsync gets you up to 1/8000th flash sync on most cameras and 1/4000th on the Pentax 645/Z (a camera that usually maxes out at 1/125th sync speed) without sacrificing any power. Shoot at full power and 1/8000th of a second if you need to. No problem.

This system is possible, in part, thanks to the Prio-Remote HS—a hot-shoe mounted 2.4GHz wireless remote control that lets your camera talk to the lights and visa versa. It both enables HotSync and lets you change your strobe settings right from your camera without having to take them down or even walk over to them… which is good since the Prio-Remote works from up to 1,000 feet away. 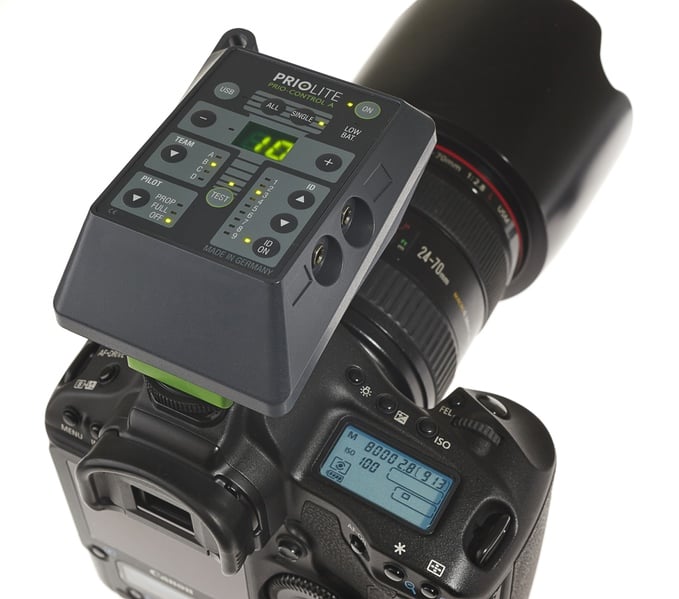 All in all, the Priolite Ultra looks like a very intriguing product. Powerful at 500Ws, portable thanks to its minuscule size and li-ion battery, and fast thanks to HotSync, it offers a tempting all-around on-location lighting solution.

Priolite is funding the strobe through Kickstarter, where you have 7 days left to pick one up for just $800 with their “super early bird deal” or $1,130 as an “early bird.” Once all the early deals are gone, each Priolite Ultra will cost you $1,300. The Ultra is scheduled to ship in September.

To find our more or order yours, head over to Kickstarter by clicking here.