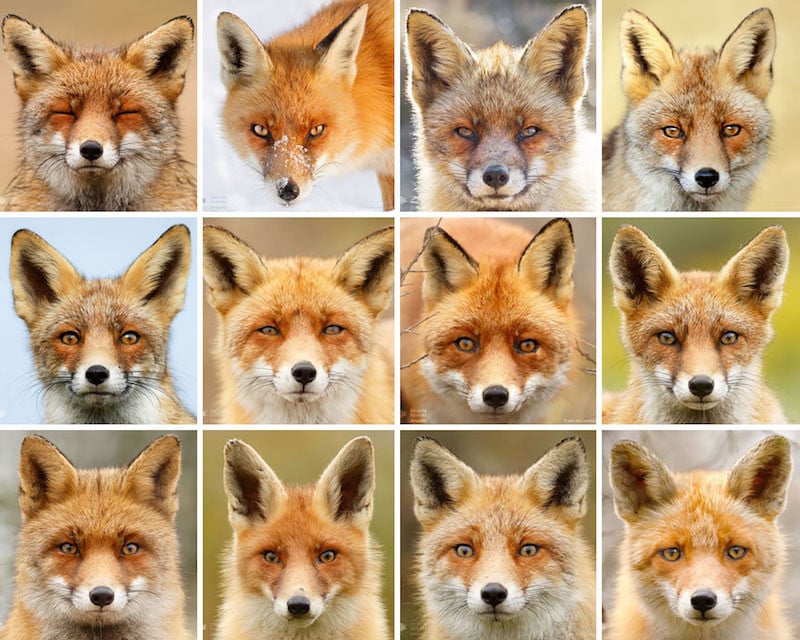 When, during the sixties, Jane Goodall gave wild chimpanzees a name instead of a number, she put the science world upside down. Anonymous animals were no longer nothing more than a number. Using something as apparently simple as a name, she validated their individuality and uniqueness.

When you face a fox, you face personality.

Many years from then, we still tend to grossly underestimate our fellow earthlings and regard them like interchangeable particles of a uniform set. Did you ever realize that “the fox,” as our beloved pet dog or the cat, consists of countless individuals, each with their own specific characteristics?

Some are a little dumb, others quite intelligent. Some creative and entrepreneurial, other boring and passive. Some are even downright funny. So many foxes, so many faces. Literally! And each “face” hides a unique character.

Since all those faces speak volumes, I’d like to introduce you to 12 prominent fox personalities: 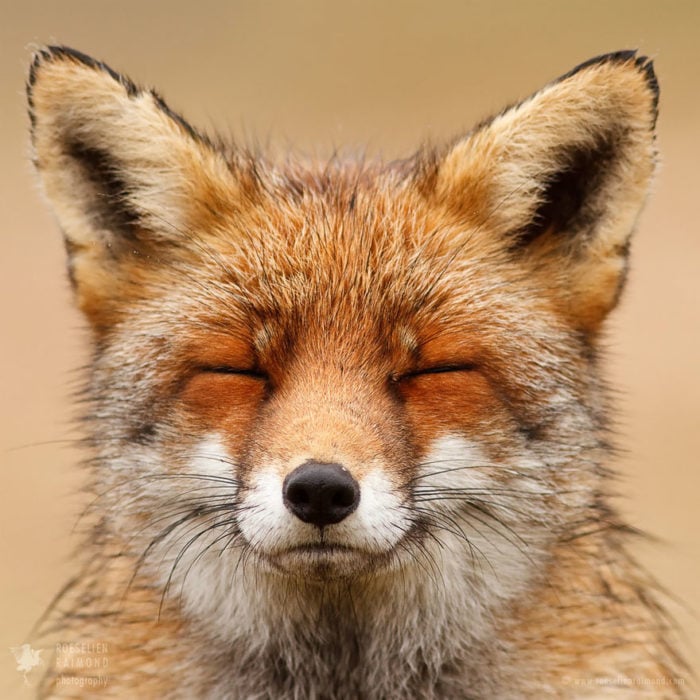 The mother of all foxes. Almost literally. Relaxed must have been her middle name and enjoying her second nature. Being the personification of satisfaction itself, she could just calmly sit in the sun for hours and hours, watching her grandchildren play and relish this sight. Moreover, she was living proof that animals can smile.

Motto: It’s All Right. Always Has Been and Always Will Be. 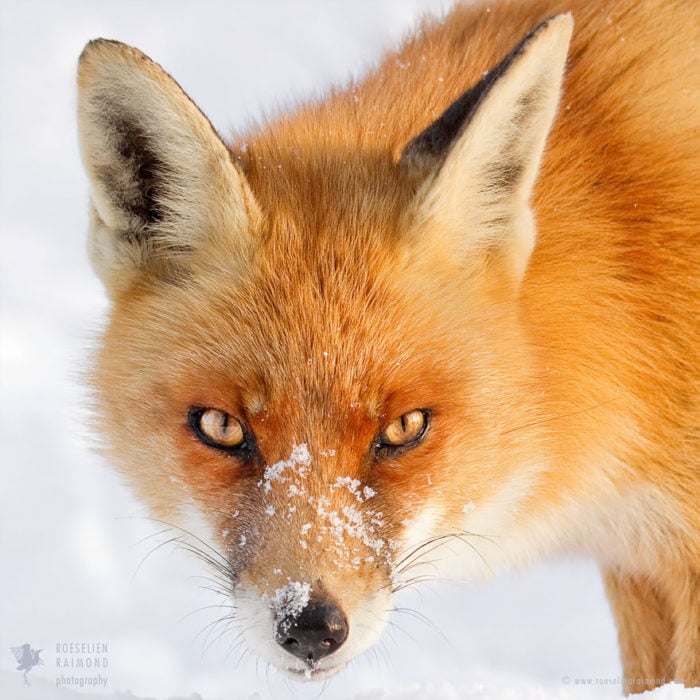 Quite a character, this is a fox with attitude. No one ever mocked this lady, not even her little fox kits. Challenge Mom’s authority; bite guaranteed. And with the looks. With her bright red, full coat, her slender muscular body, long straight nose, proud ears and irresistible smokey eyes, she would win any beauty contest with ease. She was less talented with regard to her choice of men, since most of her offspring weren’t blessed with her beauty, but were born with a jaw abnormality instead.

Motto: I’m Too Sexy For This Site. 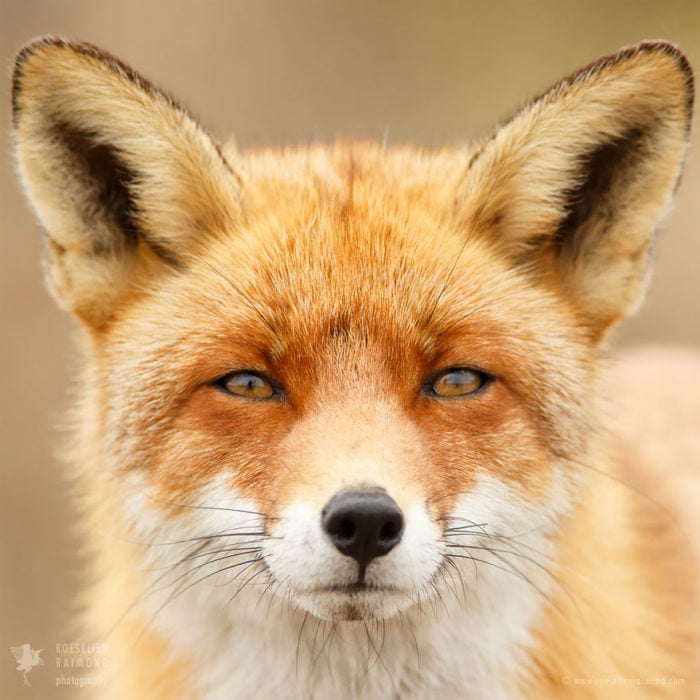 This lady in red was standing front row when red coats were distributed. Never before had I seen a fox with such a perfect red cloak.

The same goes for the distribution of self-confidence and courage. As a young fox she proved to be a mistress in making perfect mouse jumps. While her siblings lied lazily in the sun, she fanatically worked on her pouncing skills. And this discipline paid off: nowadays she bets higher and may call herself the mistress of chasing rabbits.

Motto: You Say Jump, I Say ‘How High? 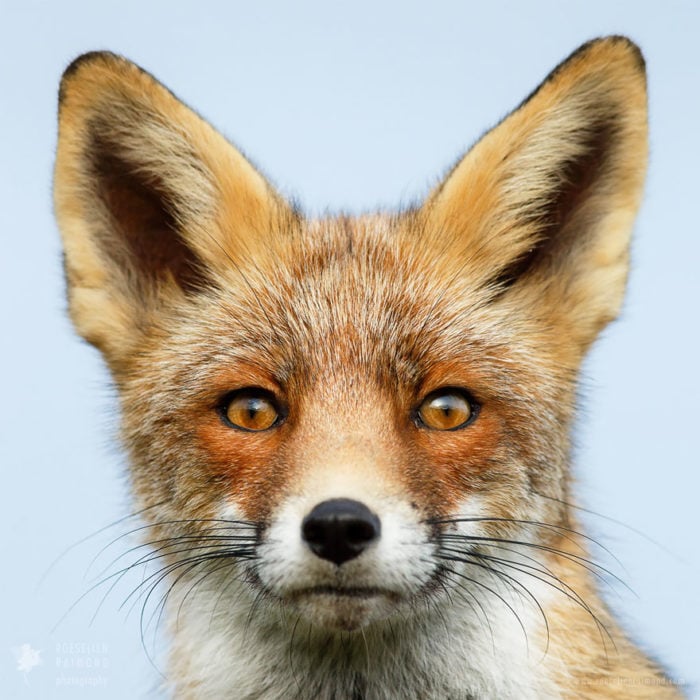 Should fox humor exist, she’s definitely got it! As well as a huge fox heart. When her big sister left the parental territory, she decided, against all fox mores, to come along. As a reward for room and board she treated her sister with a daily cleanup.

When the Queen Mum died, she became alpha fox willy-nilly. Someone’s got to do the job, right? From airy joker, she turned into a lady who knows the ropes. By resolutely wiping mothers lovers from the territory, she claimed direct order. She may be one of the smallest foxes, but size does not matter in fox country. Owning the biggest mouth does. 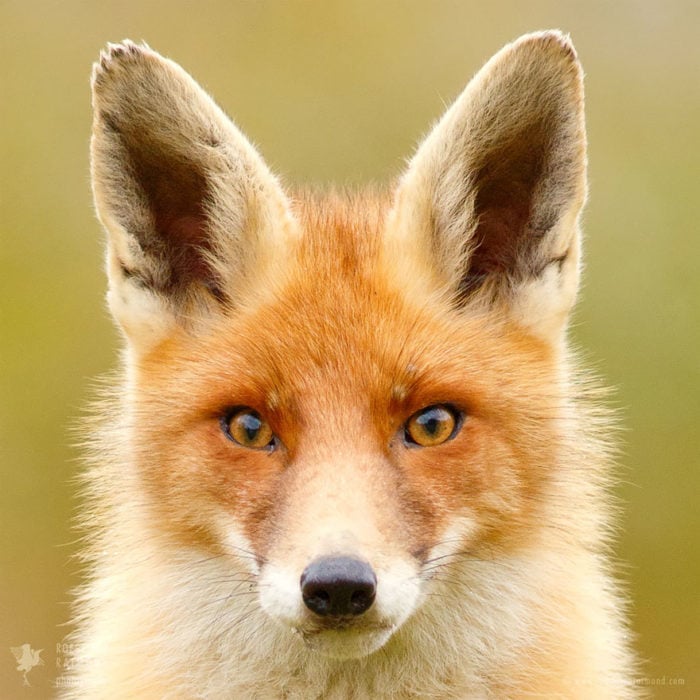 Being the smallest and weakest of the litter, she worked her way up to crowd pleaser. Rightly so. She had tough competition to her beauty queen mum, but won the race on character points.

With her uniqueness, she became the uncrowned princess of the dunes. And despite her slightly misshapen jaw and unfoxy coat, she was a beauty as well. She proved that an animal has a free will and is able to make her own personal choices. 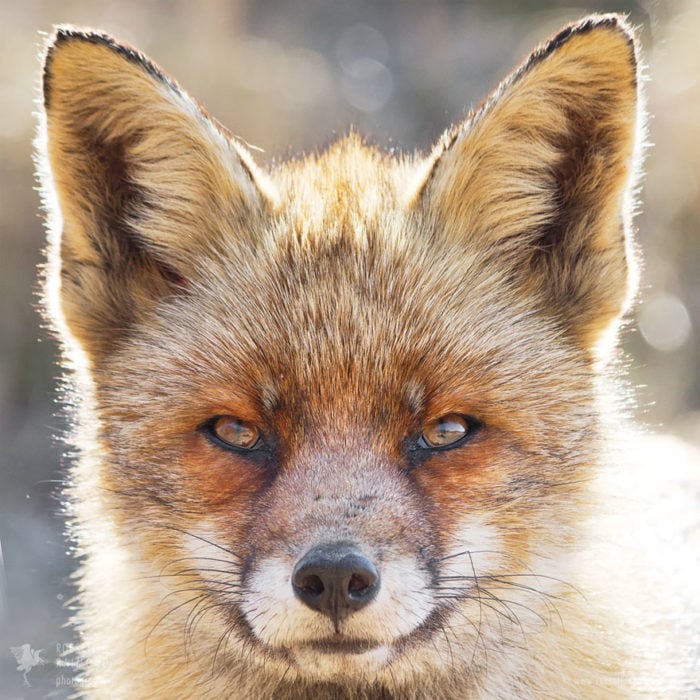 When I first met him he was already very old. As one happy grandpa on a bench at the jeu de boules, he was sitting in the sun. With a face only a mother could love and his unabashed attitude, he made me laugh.

Had he been a human I’m convinced he would, like an old expired hippy, go on and on about his childhood mischiefs. 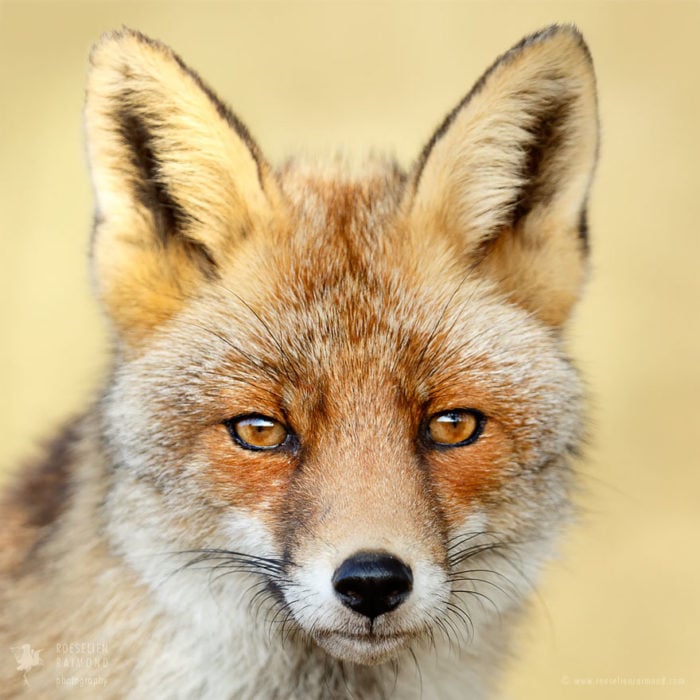 The most respectable fox of the class. Unlike almost all other foxes, she actually has no bad habits at all. Therefore, she’s the only one who actually behaves by the book and does exactly what you would expect from a red fox: she hunts mice, she sleeps, she eats, she cares for posterity, brings them up and chases her boys away as soon as they reach adolescence.

You won’t find them neater fox… or a more boring one either. (sorry, Serious Fox!)

Motto: Why NOT So Serious? 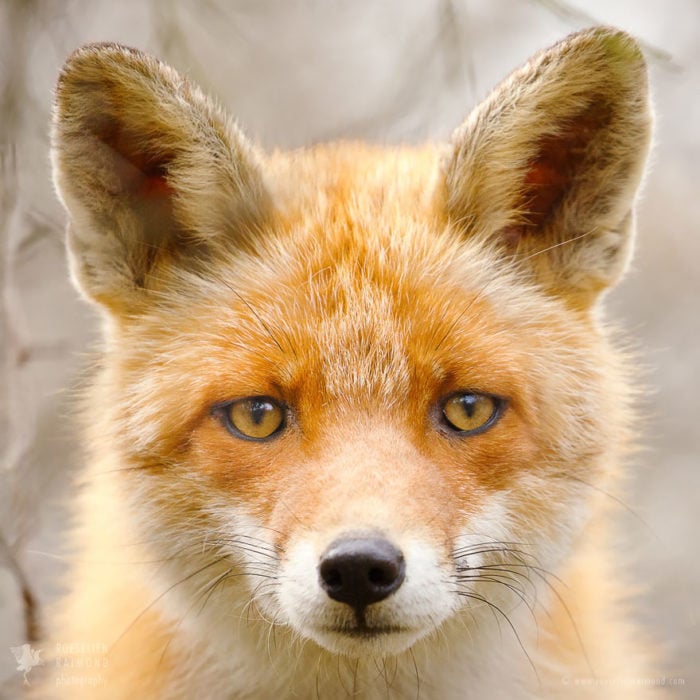 The Don Juan of foxes. Before reaching the age of one year, during mating season, he ran through the dunes like a madman. No female fox could resist this sad, intense gaze. All female foxes, from minor to elderly, he wrapped around his paw effortlessly. 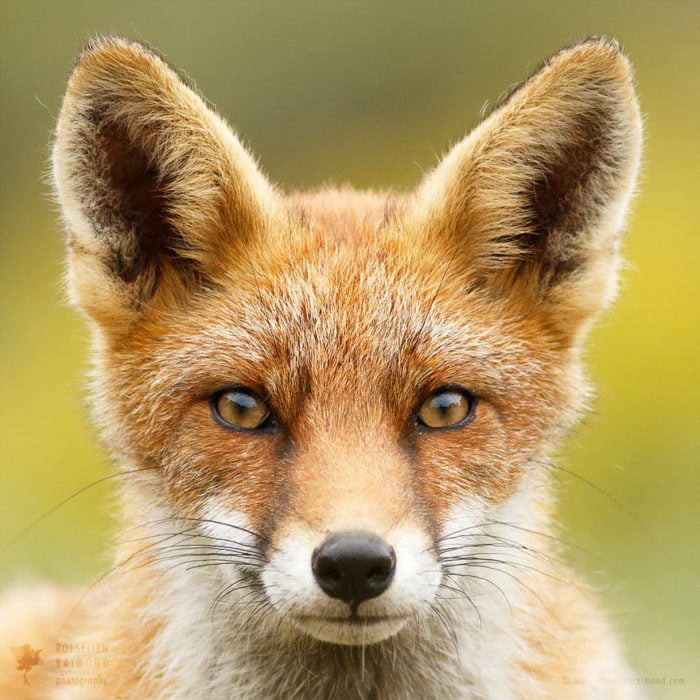 As a young fox her favorite thing in the world was to steal just dug-up lizards from her brother. This hunting technique was successful until puberty, when little brother suddenly became big bro and revised ratios.

Since that time she has improved her hunting techniques, specializing in the looting of nests. Once a thief, always a thief, but a very sweet thief indeed! 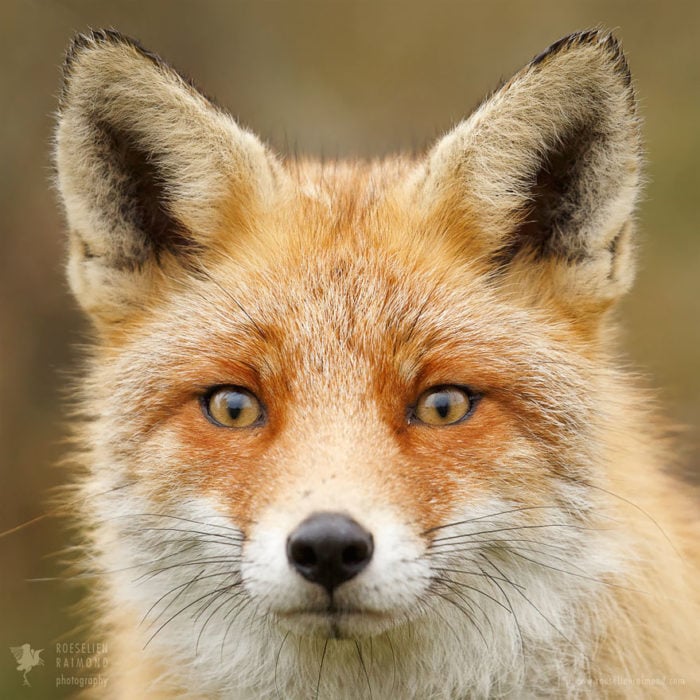 Small enthusiastic madcap with grand ambitions to succeed her mother as alpha fox; the sooner the better. She bent the fox rules by becoming teenage mom. She dominates the biggest and strongest men with her own secret weapon: terrible hysterical squeaking that makes the biggest fox shrimp. And all this is totally compensated by her wonderful sweet character and a gorgeous smile, which she inherited from her grandmother.

Motto: It’s Mine, Even Though It’s Not. 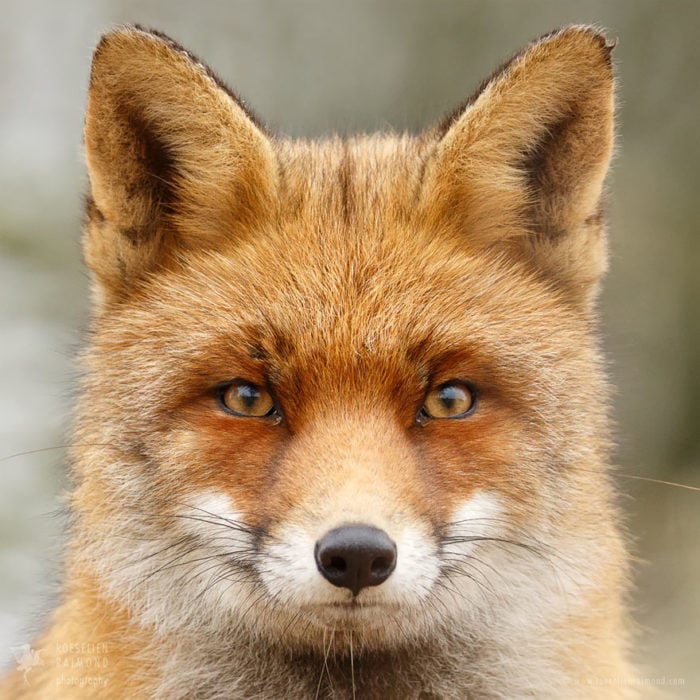 Lacking a mirror, he will never know how irresistibly handsome he is, and is doomed to remain modesty itself. By not acting like the beau he is (or just being afraid of another shouting match) he let go of all the females. No matter how agitated it gets, he will keep his composure. Always. And wait quietly.

Motto: My Time Will Come. Maybe. One Day. 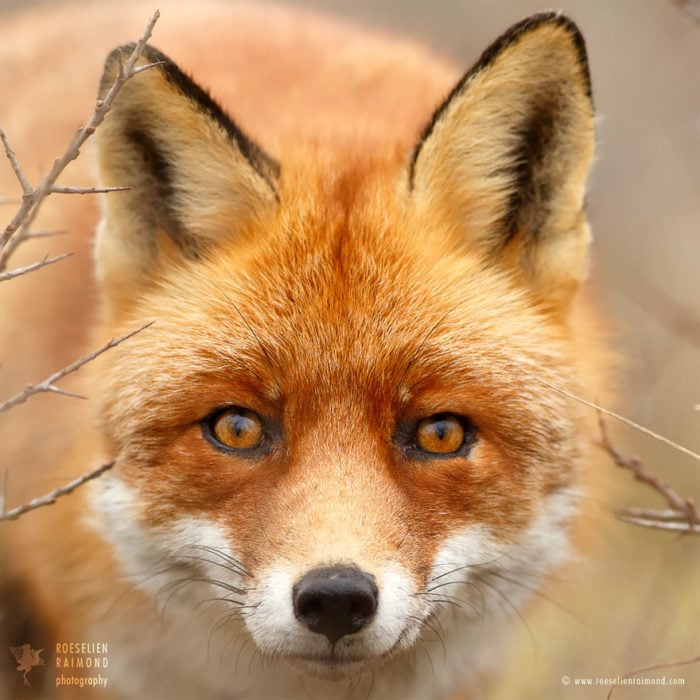 Aight. This guy may look like the Mike Tyson among foxes, with his imposing shaggy stature and scarred face. But looks can be deceiving and you couldn’t be further from the truth.

This is the sissy among foxes. Even the smallest female fox gets him squeaking on the floor effortlessly. He is a softy that’s literally scarred by a heavy fox life. He probably thinks back with nostalgia to the days when the vixen accepted him as a partner in his territory, removed his ticks, and licked his wounds. Fox life can be hard and, regrettably, the heyday of romance and loving care are over for him.

Image credits: Roeselien Raimond is a Dutch photographer and former Web designer who was seduced into a career as a nature photographer. To see more of her work, visit her website or give her a follow on Facebook, Instagram, and 500px. This article was also published here.

How Japan Became the Heavyweight of the Camera Industry

This Nature Photographer is an Animal Whisperer