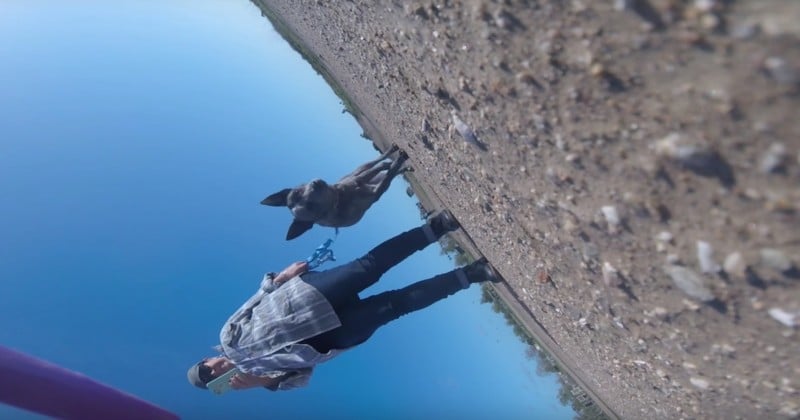 After seeing a drone crash in the distance, a woman took it upon herself to take it and claim the drone “almost killed her” to the police after she is confronted by the quadcopter’s owners. Fortunately, the drone recorded the whole thing…

Warning: The video in this post contains inappropriate language.

The incident took place at a park in Southern California, where a group of First Person View (FPV) drone pilots called SFPV were flying their quadcopters after a race. They were there legally, flying with permission in a section of the park meant for RC planes when they crashed one of their drones. That’s when things went sideways.

A woman walks over from a good distance away (definitely less than the 5ft she claims in the video), takes a picture of the drone, and then picks it up and starts carrying it away. Later she tucks the drone in her shirt, calls the police, and, when confronted by the drone’s operator, begins cursing and flying into a rage about how the quadcopter “almost killed” her.

Fortunately for the SFPV guys, the police officers they eventually explain the situation to were very understanding and didn’t simply take the lady at her word. But even if the situation had escalated, they had all the proof they needed that she was lying on the video the drone was recording the entire time.

The point of the video, SFPV writes, is not to shame the woman. The goal is to show the public that, “even though most FPV pilots practice safe and responsible flying, there will always be irrational people out there who will seek out conflict with drones and drone pilots.”

They hope the video helps show that there are always two sides to a story, and someone claiming they almost got “taken out” or “killed” by an errant drone might not always be telling the truth.

Instagram Rolling Out Algorithmic Feed to Everyone Starting Today