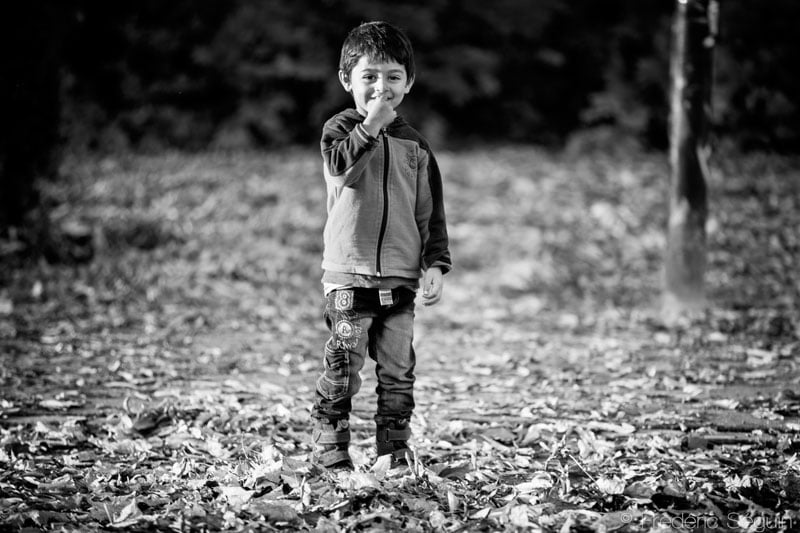 The children are always the most vulnerable but at the same time, the most resilient. Their young age makes them easy prey for sickness, abduction and trafficking and they often do not even understand why they have to leave their home. Nonetheless, these little human beings show impressive courage as they always are the first ones to regain their smiles.

This crisis too often robs them of their childhood as they are faced with the realities of the roads and being responsible for their younger siblings. At their age, they should be studying and playing with friends without worrying about their futures. 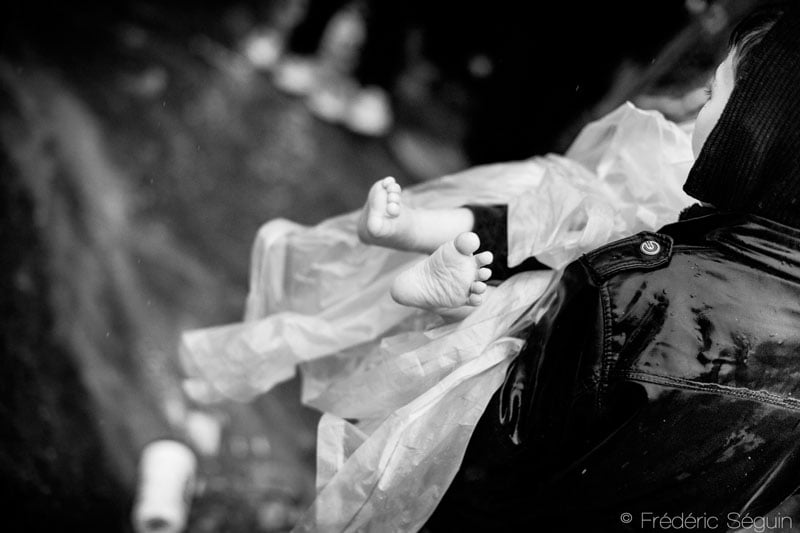 Older brother taking care of the young one. Baby in his arm and protected under a sheet of plastic, a boy walks around the camp of Moria under heavy rain. Moria, Lesvos Island, Greece. 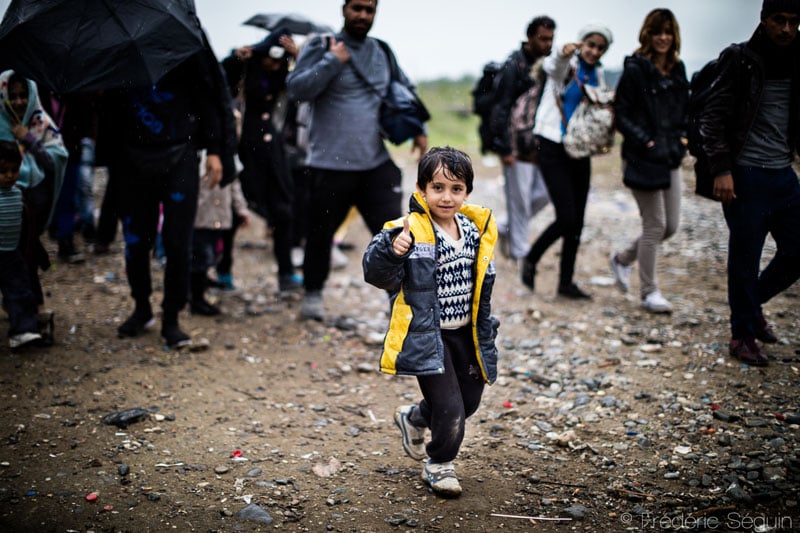 Wet, tired from the walk and still smiling and posing. A kid shows his strong will to the photographer as he is is walking in the fields towards the transit camp of Gevgelija. Gevgelija, Macedonia (FYROM). 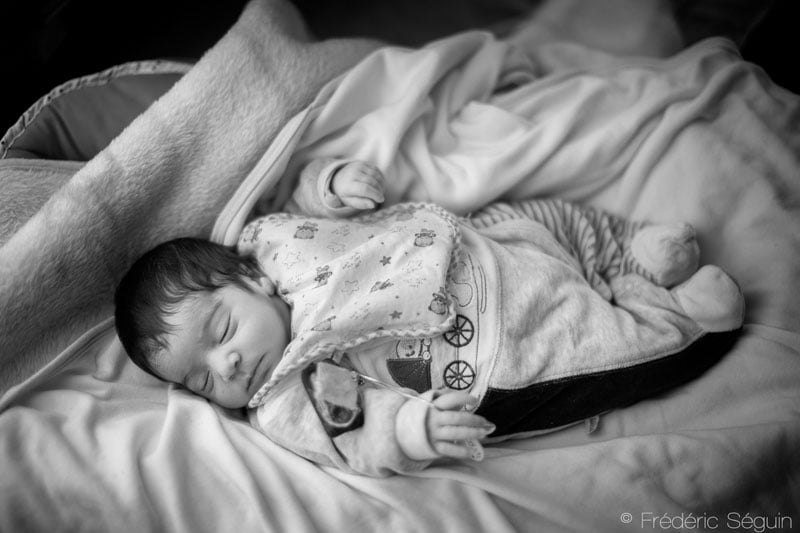 Less than two weeks old, this toddler has spent his first days on this world on the road. Being so young and so fragile, he is very vulnerable to the tough conditions of the journey. Gevgelija, Macedonia (FYROM). 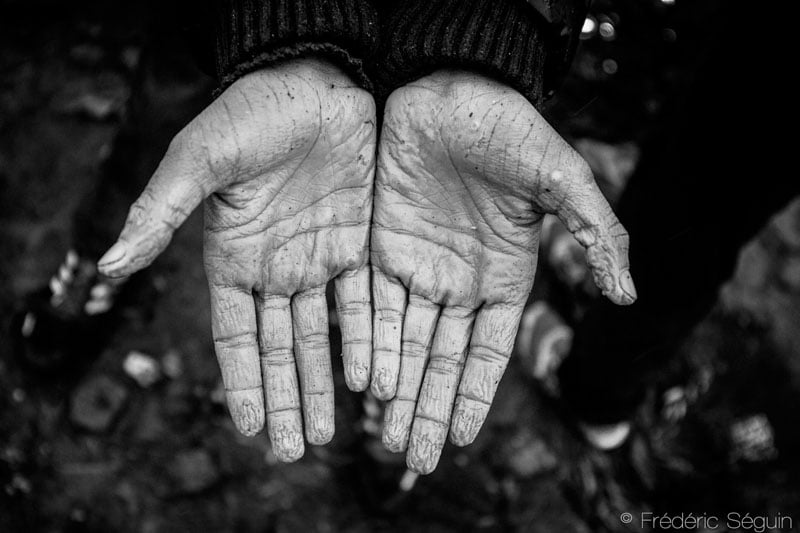 Yes, this photo belongs here. Those are the hands of a twelve years old boy after spending many days under the rain without shelter in Moria Camp. Lesvos Island, Greece. 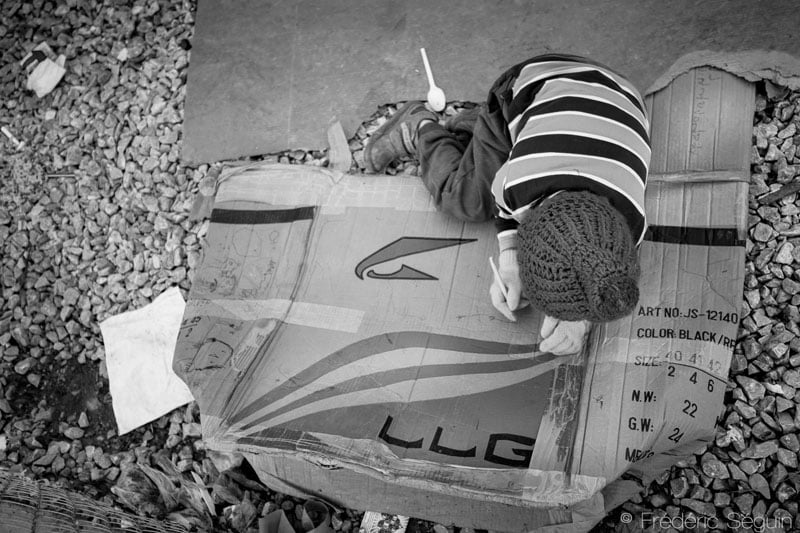 Finding a way to entertain himself, this child draws on a discarded piece of cardboard while waiting in the registration camp of Moria. Lesvos, Greece. 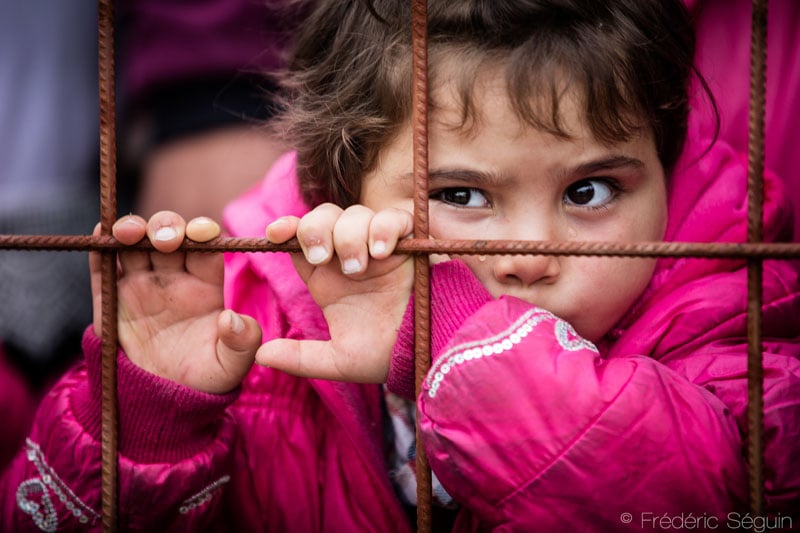 Stuck outside in the crowd attempting to rush into the transit camp of Gevgelija, this little girl cries as she is holding on the fence that separates her from the security of the camp. Gevgelija, Macedonia (FYROM). 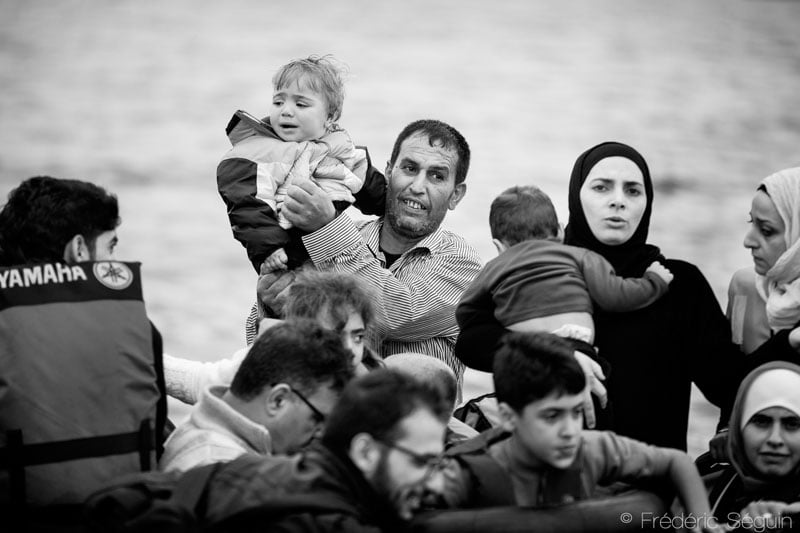 A little boy is held by his father as their boat arrives on the Greek shores. Boats arriving on the shores are always dangerous moments, especially for the young ones that can be victims of the chaos as it too often happens. Lesvos Island, Greece. 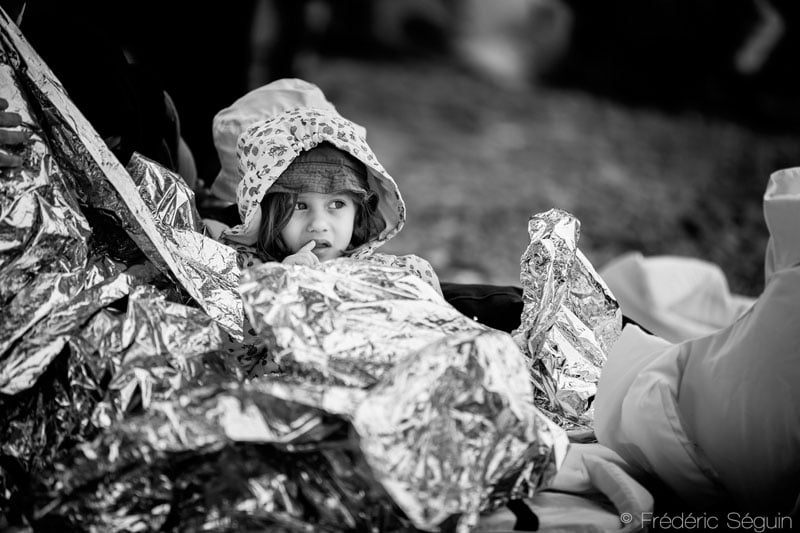 A little girl is wrapped in thermal blankets as she recovers from the perilous crossing of the Aegean Sea. Her family is morning as one of the women drowned while getting off the boat. Skala Sikamineas, Lesvos Island, Greece. 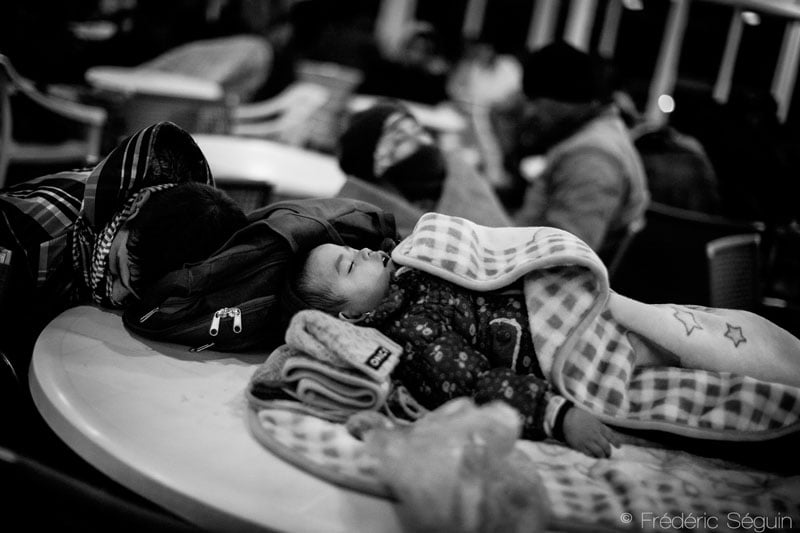 Father and son getting some sleep on the ferry linking Molyvos on Lesvos Island to the port of Piraeus, Athens. Aegean Sea, Greece. 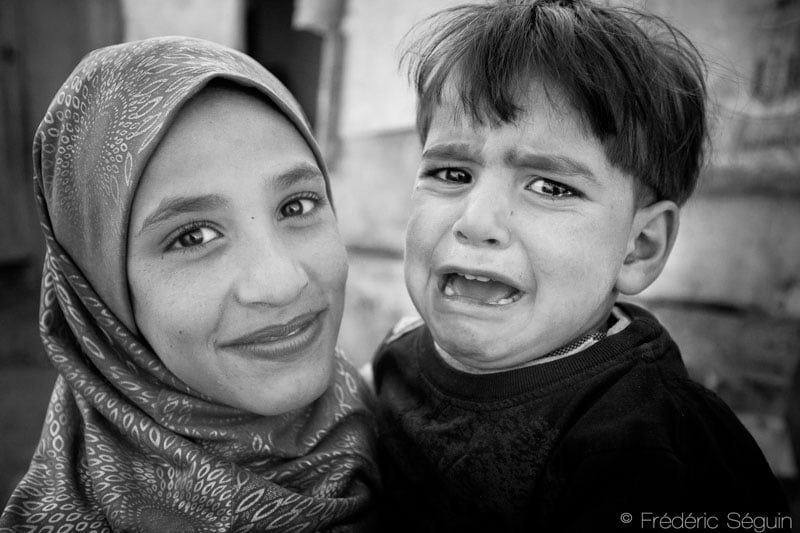 A young girl proudly shows her little brother to the photographer but he does not share her interest for the pictures. Children in the refugee camps do not see many strangers and a photographer for them is a real entertainment. Bekaa Valley, Lebanon. 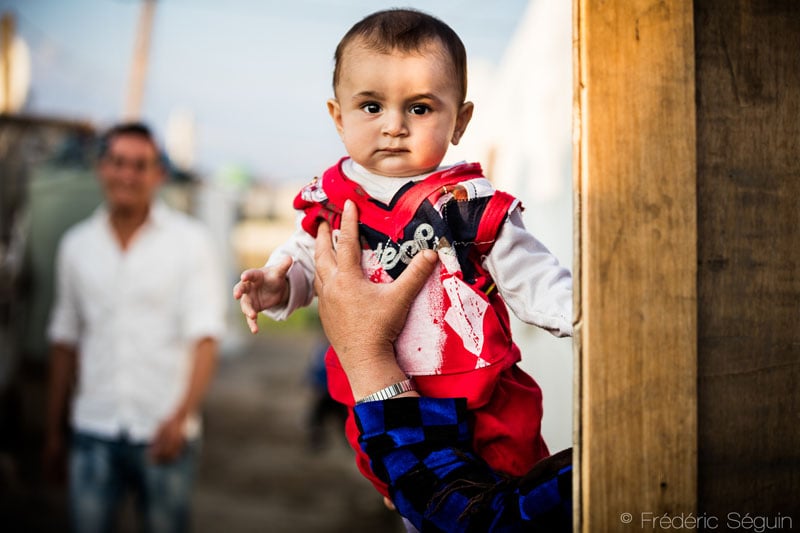 A mother in a refugee camp holds her son to be photographed but hides herself. Bekaa Valley, Lebanon. 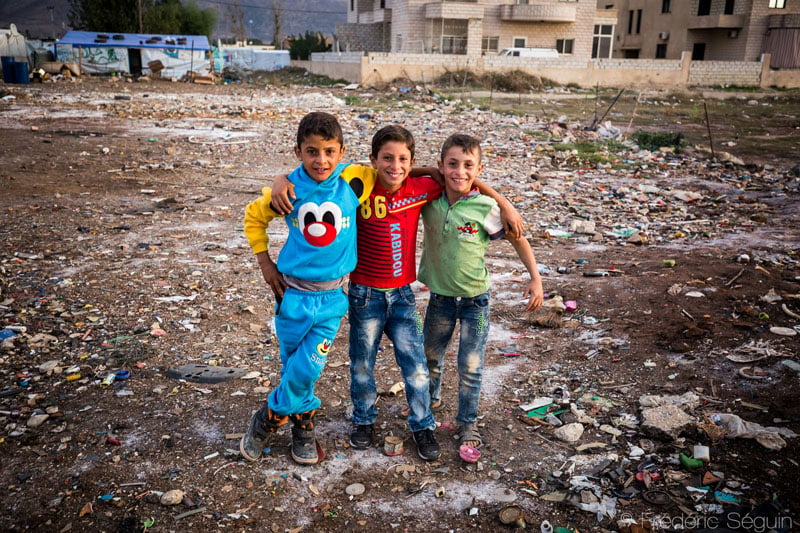 A group of young friends together in their playground that is the improvised refugee camp where they live. Bekaa Valley, Lebanon. 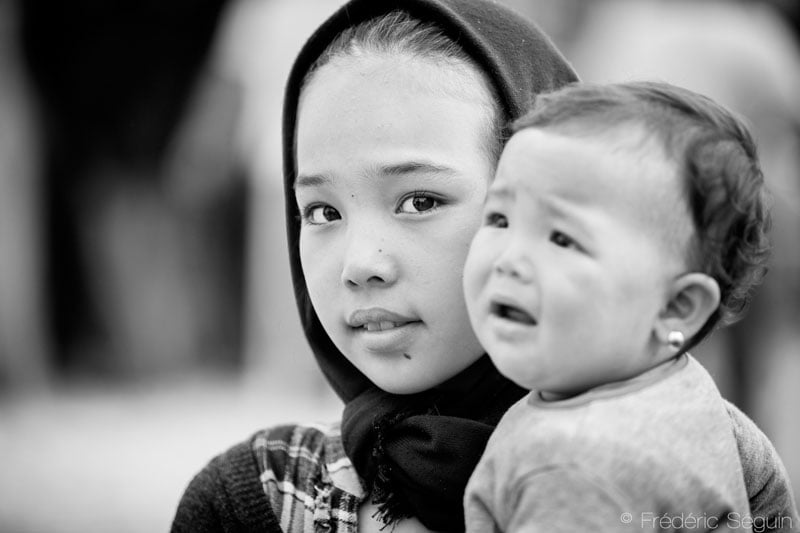 A young Afghan girl carries her sibling in her arms. Gevgelija, Macedonia (FYROM).

About the author: Frédéric Séguin is a photojournalist telling the human part of the stories taking place on this planet. You can find more of his work on his website and on Facebook. This article was also published here.

These Photos Got a Photographer Banned from North Korea