The power of the slowly moving ice could be felt even from our lofty vantage point in the small, single-engine plane. A vast river of glacial ice stretched far into the horizon. Treeless mountains reared above us on both sides as we soared up the valley, their grey stone walls loosely robed in a white frock of snow, even though it was the height of summer. 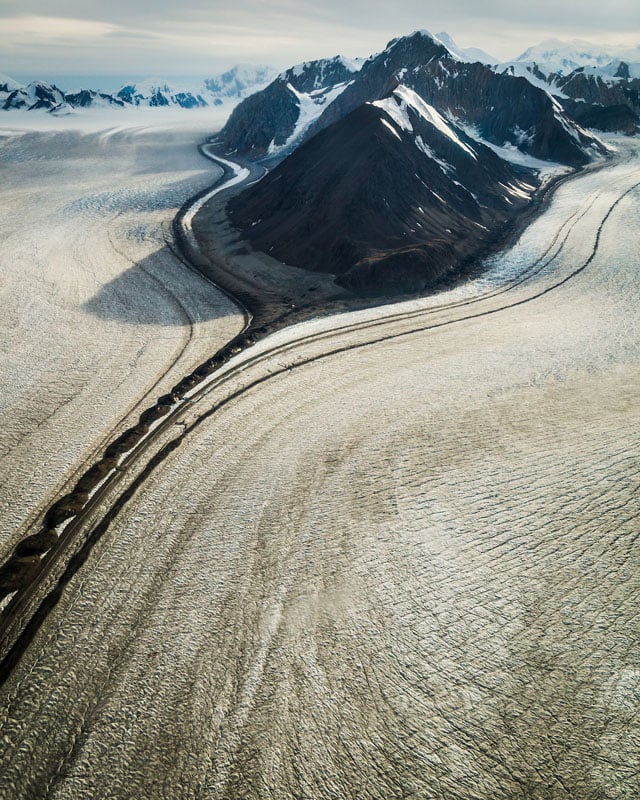 The St. Elias Icefields in Canada’s Yukon Territory are remote. The airfield and base camp for many glacial scientists is already a two-and-a-half hour drive from Whitehorse, the capital and largest city in the territory where I work as a photojournalist. Whitehorse itself is a two or three day drive up the Alaska Highway from Edmonton, the closest major city to the south.

Family visiting from the prairies necessitated a trip to Kluane National Park, which encompasses the Canadian portion of the icefields, and borders the Wrangell-St. Elias National Park in Alaska. Kluane is spectacular enough from the ground: lofty, rugged peaks provide a stunning backdrop to crystalline lakes and the occasional grizzly sighting. The seven tallest mountains peaks in Canada are found in Kluane. We decided to see it from the air as well. 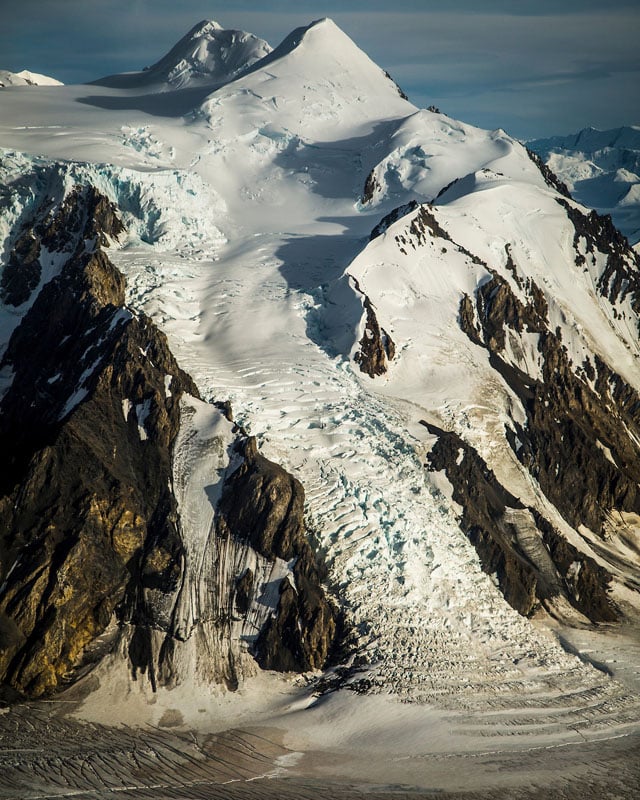 There are a number of flight tour operators in the area; we flew with Icefields Discovery, a company based out of the Kluane Research Station north of Haines Junction. Thankfully, a storm system moving in that was threatening to ground the planes held off long enough. Even with the potential bad weather, we wanted to fly as late in the day as possible to get more interesting lighting. Unfortunately the sunrise flights were all booked. When loading up the plane I opted for the first row behind the pilot. It had a nice big window, which allowed for more flexibility when composing shots. Shooting from the co-pilot seat isn’t always the best, as it can be more cramped with instruments, and you can’t shoot out the front that easily as the prop and cowling are in the way. I mounted my trusty 24-105 onto my Canon 5D Mark III and stuck my 17-40 beside me, just in case 24mm wasn’t wide enough. 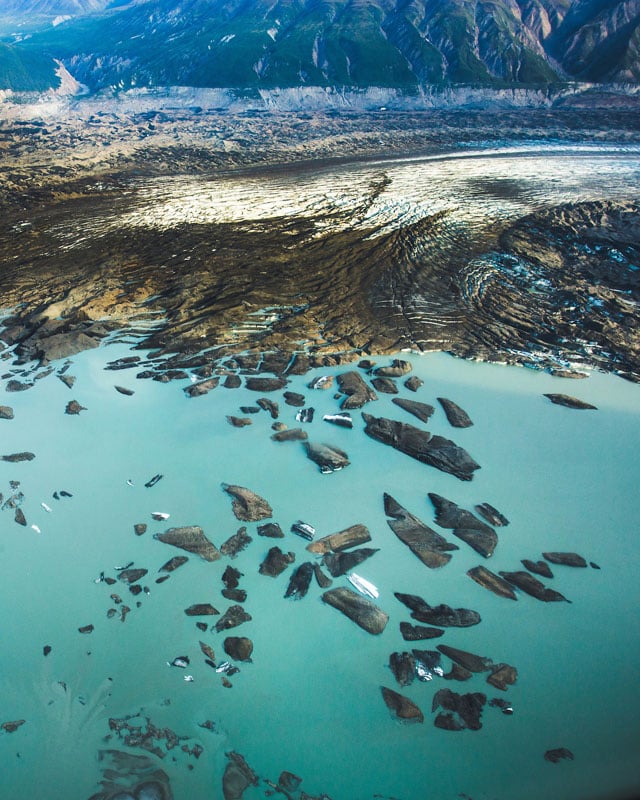 I cleaned as many scuffs off the window as I could while we were still on the ground. You can’t just pull the plane over halfway through the flight if you notice a smear on the outside of the glass. The best case scenario is to take the doors completely off when shooting aerials, but that wasn’t an option in this case. Shooting through the glass always softens the images up a bit, but in most cases it’s not too noticeable. The sharper the angle between your lens and the window, the more distortion you’ll get. I frequently shoot pictures with the camera at an angle to the glass and don’t worry too much about it, but the best practice is to keep it flat. If I see something interesting coming up in the distance, I’ll make sure to shoot it as it passes right beside the plane. Zoom also seems to play a factor in the sharpness of the images. A wide angle will not exhibit as much fuzziness as a telephoto. 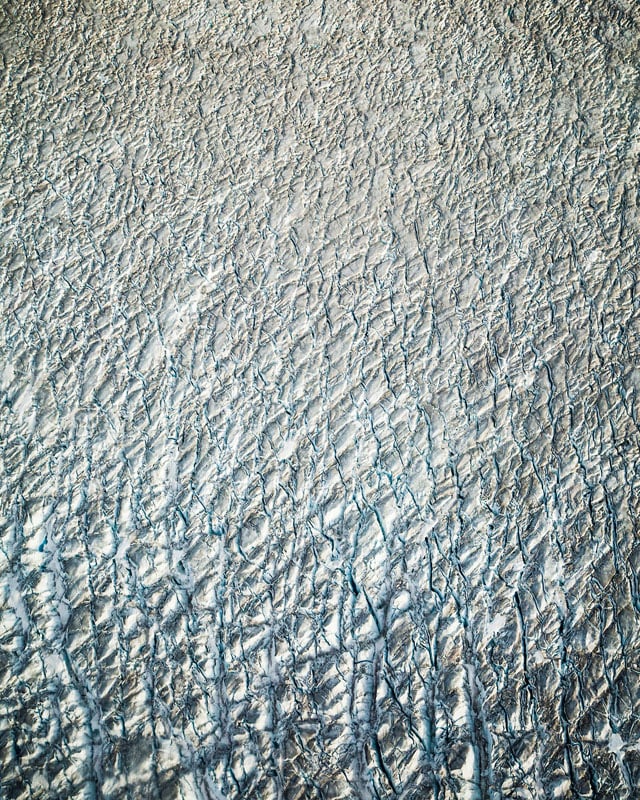 Getting a sense of scale was difficult. With no traces of civilization anywhere, we didn’t have a reference point to help us out. Massive peaks jutting out of hundreds of metres of snow and ice looked like small hills you could climb in an hour. The long, striped rivers of ice almost began to look like highways with lane markings on them. When our pilot pointed out that these glaciers can reach up to 1,000 meters deep, we began to feel a bit dwarfed. 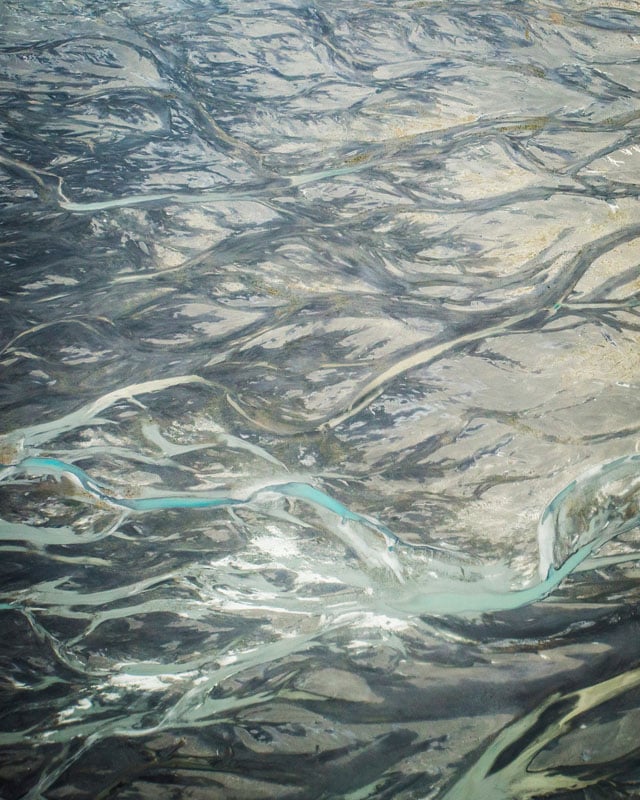 With the huge size of the glaciers, it seemed like we weren’t flying that fast. In reality, we were going over 150km/h. With that in mind, I made sure to keep my shutter speed nice and fast, aiming to stay above 1/250. The main glacier we followed was the Kaskawulsh, just one of many large glaciers that help make up the St. Elias icefields, the largest of it’s kind outside of the north and south poles. The Kaskawulsh is born from this massive accumulation of snow and flows slowly down, joined by other smaller glaciers, until it terminates 70 kilometres later in the Slims River. In all, the glacier descends about 1,700 metres. If you ever find yourself up in the Yukon, make it a point to witness these colossal spectacles of nature’s power. 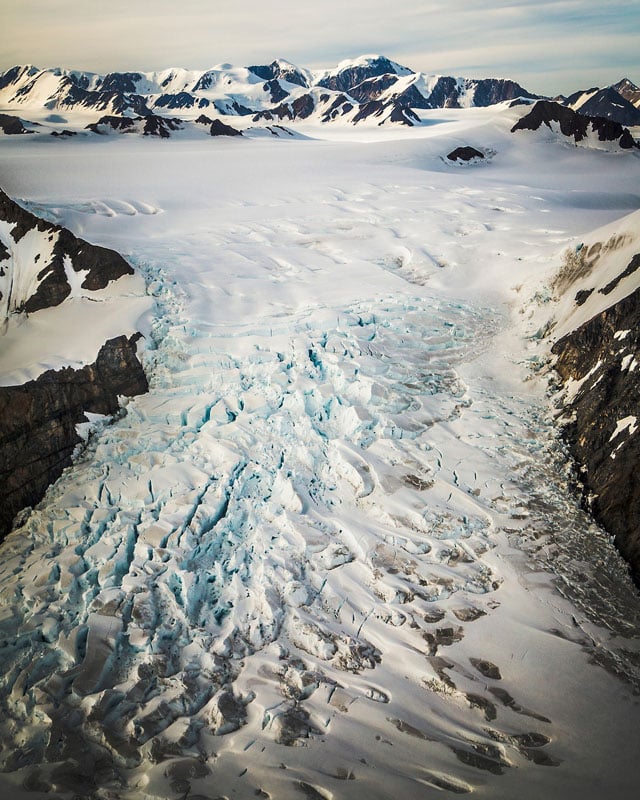 About the author: Joel Krahn is a Whitehorse, Yukon, Canada-based photographer who specializes in telling stories with photos for Yukon News. His aerial photos of Africa were published on PetaPixel in 2014. You can see more of his work on his website.

Image credits: Photographs by Joel Krahn and used with permission