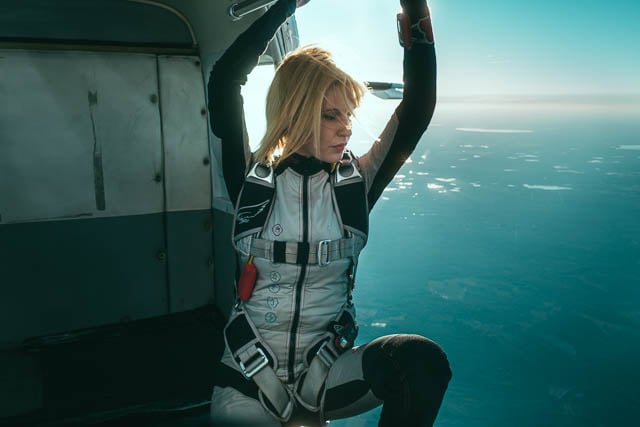 “What single moment defines a skydiver?” This is the question I kept asking myself as I prepared to photograph Sarah. At the time of this shoot, I only had a few tandem jumps (attached to an instructor.) But still, that “moment” — for me at least — had always been getting in the door before a jump. You can put the gear on, you can ride the plane up, but getting to the door is where you really have to face yourself. And so it was this moment that I chose for our shoot: at the door, arms overhead, eyes fixed on the beyond.

Knowing the tight space I’d be working in, I rehearsed the night before, imagining myself on the plane and quickly dismissed the use of a soft box or umbrella. So I decided to instead bounce a flash off the metallic fuselage. In my office I set up a silver reflector and observed the quality of light bouncing across the room, as seen in the pictures below. This bounced – artificial light turned out to be the key in giving Sarah enough fill if I was to also properly expose for the exterior.

Drop zones turn a profit with a very simple concept: get a plane full of jumpers up and down as quickly as possible (so as to burn as little fuel as necessary). After the last jumper has exited the plane, every minute left in the air would be on borrowed time. I needed to be certain of my plan and wear it out, completely exhausting the angle I had chosen. Composition, focal length, exposure, all of these decisions had to be made before we took off.

On the ground we took some test shots, exposing for the landscape(soon to be sky) in the first image and then bouncing a flash off the cabin to hit her with enough fill light as seen in the second image. I made a few adjustments and took note of my settings (including a flash at maximum output to counter the natural light.)

Considering I’d be untethered and near an open door, it was mandatory that I wear a rig “just incase.” Sarah helped me wrangle all the straps while someone else pointed towards a handle and stated simply “if you find yourself outside the plane just pull this… but you shouldn’t need to.”

“Well, alright then,” I thought.

As we climbed upwards a layer of atmosphere was quickly building between us and the ground, our world was now much different than it had just been. We reach our altitude with one last pull upwards, and the plane slows – shuddering a bit, the door goes up and a green light comes on, a rush of cold air enters the plane and a thought of “oh s**t,” crosses my mind. At ground level the temperature was a balmy 85 degrees. At 13,500ft, that’s been cut in half. But it’s not the cold that has my attention, it’s the realization that we’ve entered another dimension of sorts, where everyone readies themselves in their own way, and then with a “woosh,” are quickly falling towards the earth.

With everyone out, the plane is empty and our time has arrived. I ask our pilot Tommy, to position the sun at the tail, giving Sarah a backlight. With sun in place we moved in and fire the first shot without a flash, a few more with the flash, and then, with hair catching the wind, the moment I had hoped for perfectly arrives. 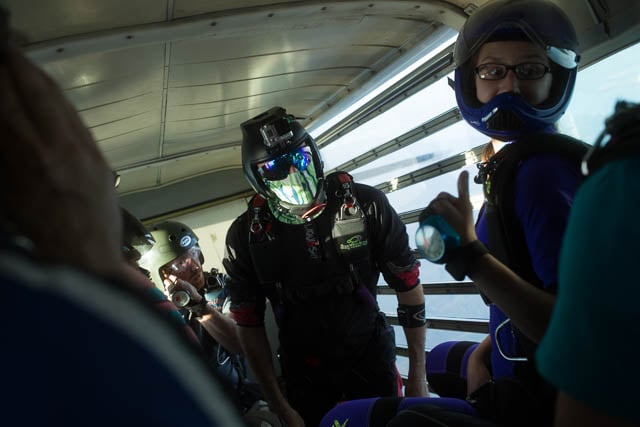 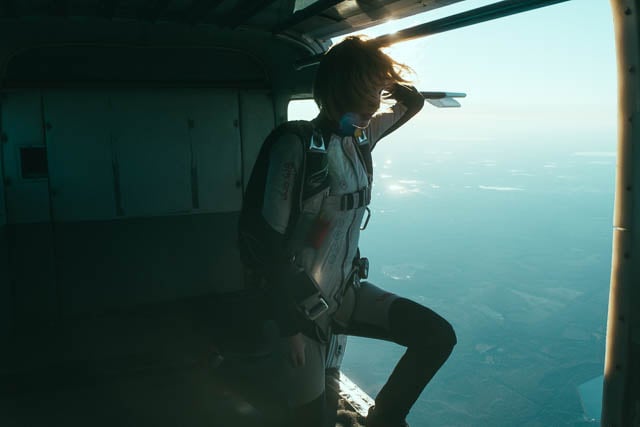 And just like that, I give Sarah a thumbs up, and told Tommy that we had the shot, he asks if we’re sure and generously offers more time, “Nah I think we’re good!” I yelled over the noise. “Alright!” he replies in a “get ready” sort of way. The ensuing descent can only be described as an all out dive. As we hurtle through the air I kept shooting (images below) until Sarah and I both thought it best that we just brace ourselves. We continue banking harder and are soon facing more ground than sky. 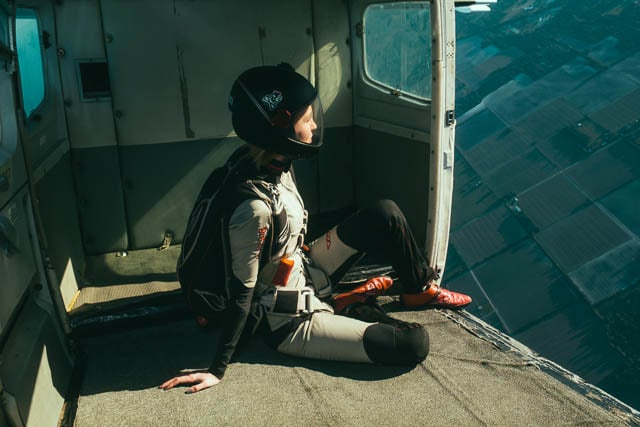 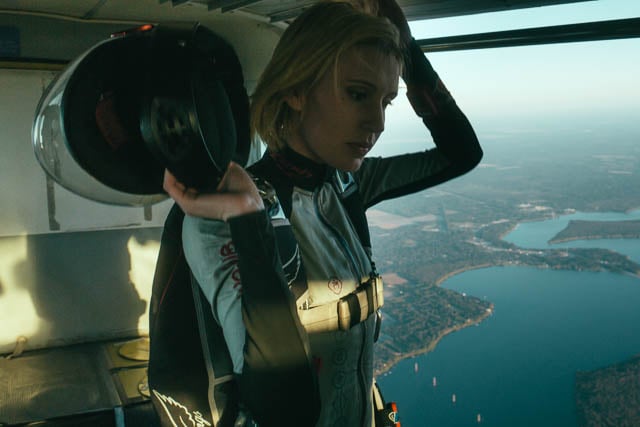 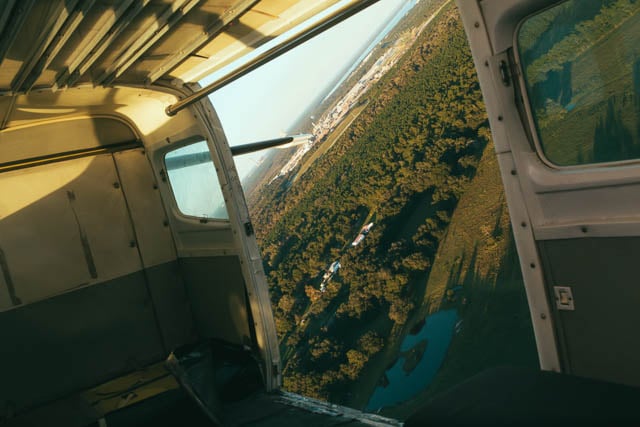 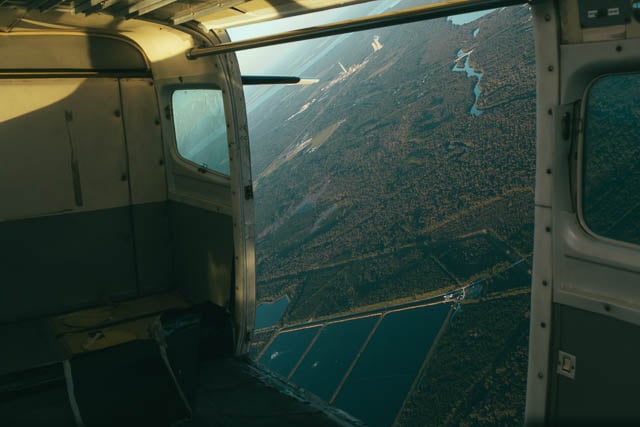 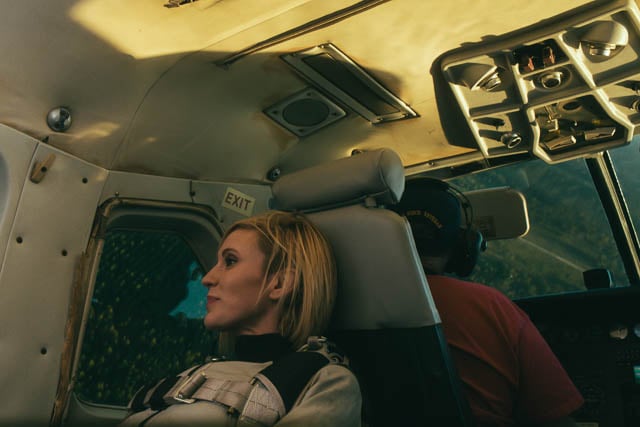 With feet firmly planted on the ground, I take a moment to admire the beautiful sunset Florida so often gives (while trying not to look like someone who almost threw up). And though exhilarated from our shoot, I found myself longing more for the jump that had not been. It may have actually been this photo shoot that helped me realize I could no longer just observe something so incredible. Today I have 27 jumps and — thanks to Sarah and Jairo — now stand within arm’s reach of finally having my A-license!

P.S. You can follow Sarah and Jairo on Instagram for all their skydiving exploits, and come jump with us at Skydive Palatka.

About the author: Doug is a photographer based out of Orlando, Florida. He holds a Bachelors of Science in Film and served as a U.S. Marine in the Iraq War. You can find more of his work and writing on his website and blog. This article was also published here.