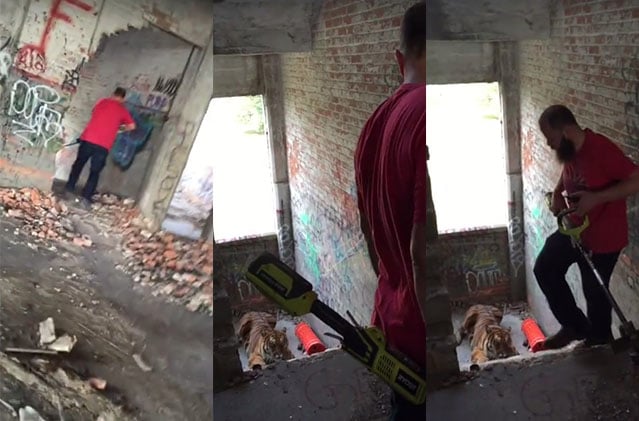 British photographer David Yarrow is making headlines after a tiger got loose during a photo shoot in Detroit.

The Detroit Free Press reports that the photographer had gotten permission from the Packard Plant to hold a two-day photo shoot in the abandoned and crumbling building. What Yarrow failed to tell the plant, however, was that there would be wild animals involved, including a tiger, two wolves, and a bobcat.

Things got a bit hairy when the tiger got loose and bunkered down in a stairway on the fourth floor.

One of the people involved in the shoot called 28-year-old Andy Didorosi for help. Didorosi brought a weed whacker to the scene, and was then asked to help hold up a blue tarp and scare the tiger down the stairway.

Before approaching the tiger, Didorosi pulled out his smartphone and started filming the whole thing:

"Remember, no talking near the tiger."

Or: When your friend calls and says he needs help getting a tiger out of a staircase, you listen. (I just happened to be the closest dumb person to the scene. The real crime here is that I used vertical video, apologies to the world.) #tigerwatch15 #tigerwatch2015 — REAL STORY: http://www.freep.com/story/news/2015/08/17/yes-s-tiger-packard-plant-detroit/31850139/

When the tarp didn’t work, one of the guys started charging the tiger with the loud battery powered hedge trimmer. Next up was a weed whip, which the tiger swiped at.

“That didn’t work,” Didorosi tells Gizmodo. “I was scared sh**less.”

The handers eventually got the tiger back into the truck — perhaps with a tranquilizer, says Didorosi. Gizmodo reports that the animal was a Siberian tiger named Texaco that measures 11-feet long and weighs 660 pounds.

“We arranged for a photography group of humans to be on site for two days,” Packard project manager Kari Smith tells the Free Press. “We never approved any animals being on the site, and we had the matter taken care of in the first hour.”

“We do not condone animals being on the site here, and the shoot was canceled. This is nothing we signed on for.”

The Free Press does note that Yarrow obtained all the necessary permits, and that the crew apparently notified the local police department of its plans. Yarrow has not responded to our requests for comment.

DAKboard is a Customizable Wall Display for Photos, Calendar Events, and Weather