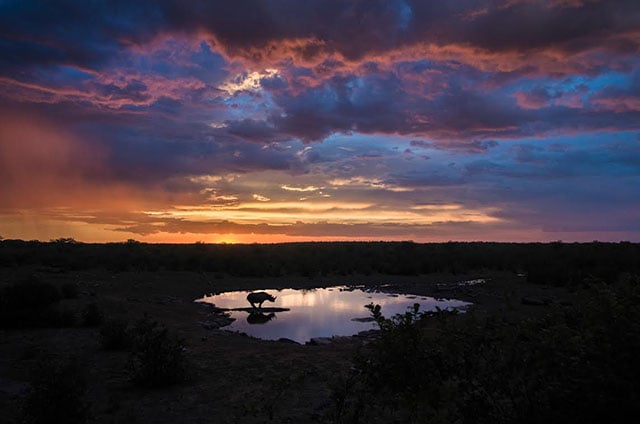 Patience can lead to great things in photography. For photographer Johan Georget, it’s what allowed him to capture this shot-of-a-lifetime of a rhinoceros in Africa.

In November 2014, Georget embarked on a 6-month journey through a number of African countries, from Johannesburg, South Africa to Addis Ababa, Etheopia — a trip that spanned 18,000+ miles, 12 countries, and 30,000+ photographs.

That December, one of the stops was Etosha National Park in northwestern Namibia. After several days of exploring the region, Georget decided to spend most of a day camping out at a popular watering hole in the park.

“The day turned to be rather dull, with an overcast sky and very little wildlife activity,” Georget tells PetaPixel. “Only a small herd of impalas came to drink in the middle of the afternoon.”

At 6pm, after six hours of staring at the uneventful scene, Georget almost packed up and left, but he decided to hold out just a little longer. At 7pm, as the setting sun turned the sky red, Georget suddenly received the perfect moment he was hoping for: a black rhino emerged out of the brush and paused for a drink, stopping in the center of the watering hole as a silhouette against the water.

It was “the shot of a lifetime,” Georget says. The image has since become a huge hit both in Georget’s portfolio and through viral exposure online. He’s also selling prints of the shot and donating 50% of proceeds to Save the Rhino.