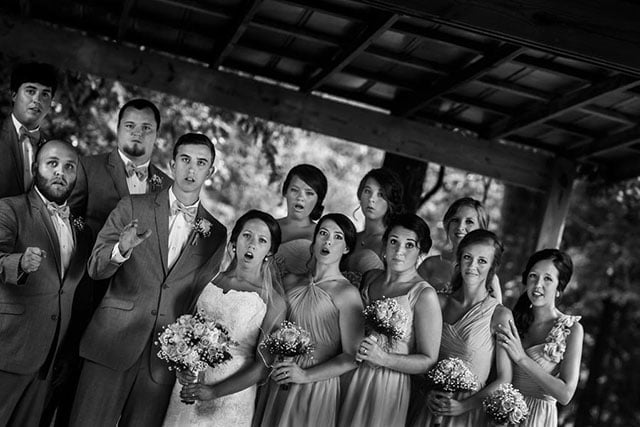 Here’s an unusual wedding photography fail: Chase Richardson was photographing a wedding party last year when he accidentally slipped on a puddle. As he tumbled to the ground, his finger pressed his camera’s shutter button and captured this photo of the party’s expressions as they watched the disaster unfolding before their eyes.

The Jackson, Mississippi-based photographer of followell fotography was shooting the wedding at the Mcclain Lodge in Mississippi back on June 21, 2014.

“It had been raining all morning so I ended up photographing the wedding party under this covered slab of concrete basically,” Richardson tells PetaPixel. “There were puddles everywhere, and when I took a step back to get ready for the photo I just… slipped and fell. Pretty embarrassing.”

The fall broke the camera lens Richardson was using and cut his finger open. It wasn’t until he loaded his photos onto a computer that Richardson noticed this photograph among the others from the day.

The photograph has since gone viral online after being shared by Jimmy Fallon on The Tonight Show.

Image credits: Photographs by Chase Richardson and used with permission