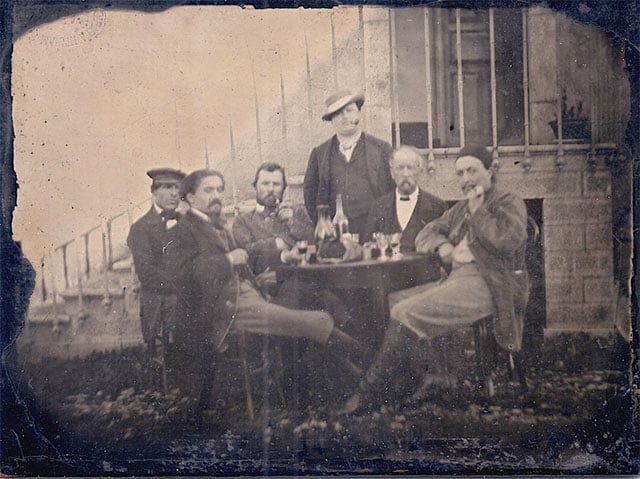 This group photo from 1887 is reportedly the first photo ever found of Vincent Van Gogh after he became an artist. If experts are correct, then the man third from the left (and smoking a pipe) is the legendary artist himself.

Over at the magazine L’Oeil de la Photographie (“The Eye of Photography”), French photo expert Serge Plantureux writes that the photo first came to his attention after it was brought to him by two individuals who had purchased it at an estate sale.

The owners had long been interested in 19th century artists, and they believed that they recognized faces in the photo, and “it was possible that one of the figures around the table was someone whose true face had never been seen,” they told Plantureux.

Plantureux and several of his photo expert friends began investigating the photo, which was mounted on a piece of black cardboard. Things they looked into included the photograph’s creation process, the identity of every man seen in the shot, the time and place of the photo, and the photographer behind the shot.

Although he hasn’t released many details of the specific findings and pieces of evidence, Plantureux says he and other experts are now convinced that they’ve identified both Van Gogh and his companions.

The photograph was put up for auction today at the The Romantic Agnoy in Brussels, Belgium. According to the auction listing, the photo is a melanotype created by Jules Antoine showing Van Gogh talking with a group of friends that includes artist Paul Gauguin, artist Emile Bernard, Félix Jobbé-Duval, and André Antoine.

(via The Eye of Photography via Phogotraphy)

P.S. Though this may be the first known photo of Van Gogh after he became an artist, there already exist other photos of him at younger years, including one at age 13 and one at age 19.

Update: Phogotraphy reports that the auction did not meet the reserve price of €120,000, and that some experts are disputing the fact that it’s Van Gogh in the photo.