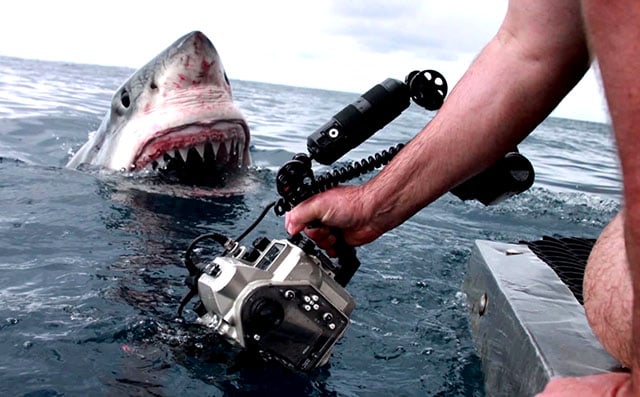 This photograph of an underwater camera being held up to a great white shark has been making the rounds on the Web over the past week. It was captured by a group of filmmakers who were shooting off the coast of South Australia.

Filmmaker Dave Riggs and his crew were filming for an upcoming episode of Discovery Channel’s Shark Week (which kicks off on July 5th, 2015) when they came across “one of the most remarkable animals I’ve ever seen,” Riggs says.

Crew member Luke Thom managed to capture a great shot of the curious 13.5-foot female shark coming up to the boat for a “sniff”:

This is how a great white "sniffs" .. it looks frightening but this .. it really is .. the last dinosaur .. WE MUST PROTECT this magnificent creature!!!! Photo by Luke Thom for Discovery Shark Week

Here’s a short behind-the-scenes video of the encounter that the Discovery Channel is now using as a promo for Shark Week:

How to Make DSLR Footage Look Like an Old VHS