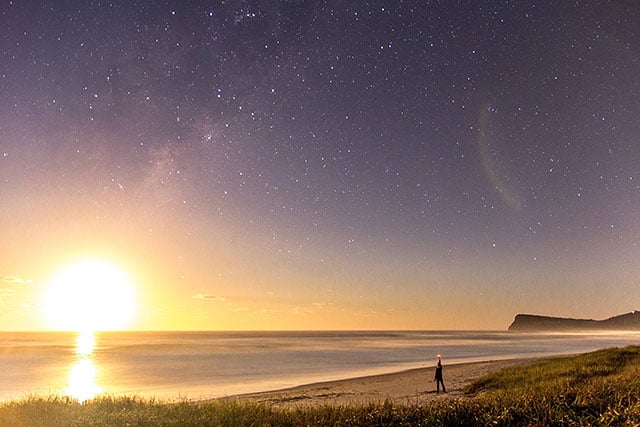 This photo may look like a Photoshopped image that blends a sunrise with a nighttime shot, but it’s actually a single exposure of a moonrise.

Photographer Jeremy Somerville tells PetaPixel that made the photo last night while photographing the Milky Way from a beach. The moon started rising, and he decided to take some shots of the moonrise with the same camera settings he was using to properly expose the stars (15-30 seconds at f/2.8 and ISO 1600, he says).

After liking what he saw in a test shot, Somerville started his 10 second camera timer, sprinted into the scene, and ended up with the picture seen above.

“The result looked so much like a sunrise but you could also see the stars, which I thought was really cool,” he says. “The Moon was about 3/4 full. This is a single exposure, only minor contrast/colour adjustments in Lightroom.”

He’s planning to return to the beach and try his hand at building on this idea to see if he can create something “even cooler.”

Image credits: Photographs by Jeremy Somerville and used with permission

Underwater Photographer Plays Hide and Seek with an Octopus

Photographers: Every Email Could Be the Start or End of a Client Relationship