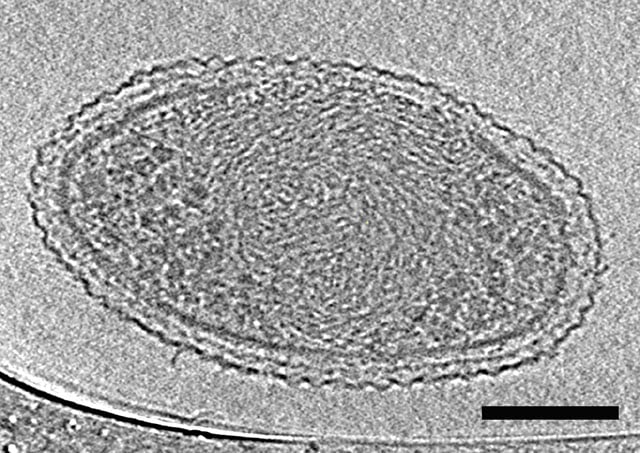 This is a picture of the smallest life form that’s known to exist, an ultra-small bacterial cell. That black bar you see is for scale — it indicates 100 nanometers. To put things into perspective, more than 150,000 of these bacteria could fit onto the top of a human hair.


The image was created recently using cryo-electron tomography by scientists from UC Berkeley and Lawrence Berkeley National Laboratory, and it shows the internal structure of these cells with a dense inner section and a complex cell wall.

Scientists believe that these bacteria are about as small as life could possibly get. At 0.009 cubic microns in volume, the cells couldn’t be any smaller because they would no longer be able to hold enough material to support life. These bacteria, which are common and were found in groundwater, are already so small that they depend on other bacteria for survival since they themselves have stripped down functions.

“These newly described ultra-small bacteria are an example of a subset of the microbial life on earth that we know almost nothing about,” says UC Berkeley professor Jill Banfield. Well, we now have a portrait of them, so that’s a good start.

(via Berkeley Lab via Engadget)