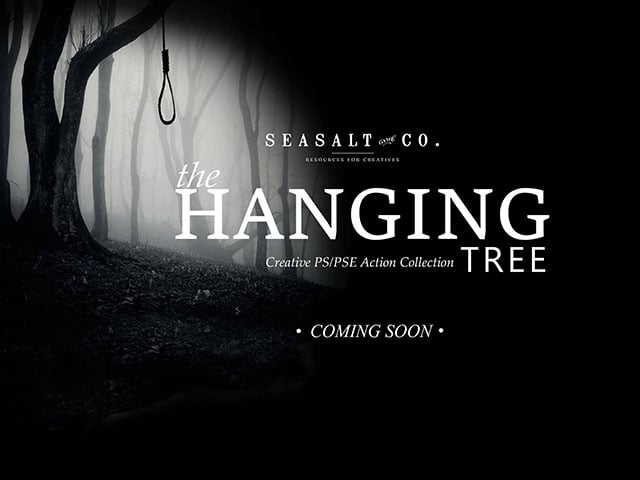 A small Florida-based photo editing tool business called Seasalt & Co. is causing some big controversy after announcing an upcoming Photoshop Action pack that many photographers are finding offensive. Titled “The Hanging Tree,” the collection was touted with a dark promo image featuring a noose hanging from a tree.


The “coming soon” post was published to the company’s Facebook page this past weekend, and it immediately attracted hundreds of comments from outraged customers:

Here is a sampling of the comments that people left: 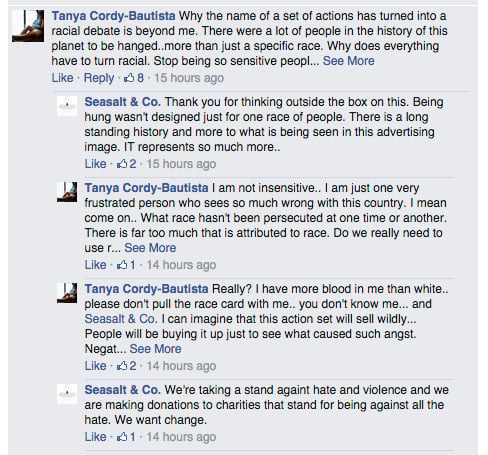 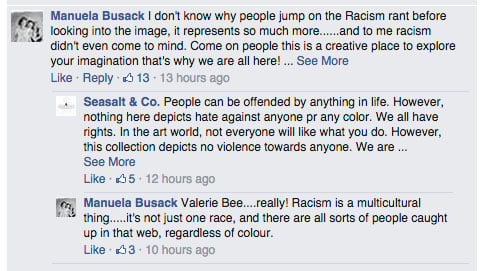 People began speaking out against the company on Twitter as well:

If it was a swastika or a gas chamber in your ad you'd be shut down ASAP but a noose from a tree is ok? NAH. @seasaltcompany

The more I see that foul image from @seasaltcompany, the angrier I get. It's not art. It's the willful ignorance of evil. Disgusting.

So @seasaltcompany puts out this image & wonders why folks are offended? During Black History Month nonetheless? #fb pic.twitter.com/BveaAMlcy0

Let's be clear about what @seasaltcompany is doing: using images of mass murder and terrorism to sell mediocre graphic design services. 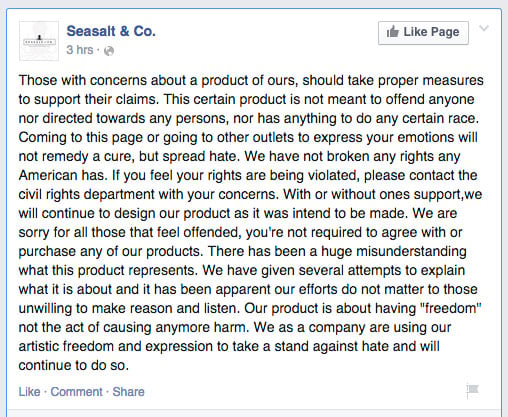 As the controversy grew bigger and the outcry grew louder, Seasalt & Co. ended up deleting all the original posts and comments from Facebook.

The damage had already been done though. The Miami New Times reported on it with a post titled “Florida Graphics Company Uses Noose in Ad, Is Not Sorry About It.” Wonkette wasn’t nearly as gracious with its wording.

Seasalt & Co. has been turning down most requests from comments, but the company decided to share their side of the story with us via email:

We have made several statements about why we chose a certain graphic for a certain product via social media means when we were asked. It has nothing to do with any race at all. Our collection is about rising above and refusing to let the world run us and hang us by any mistakes we have made or didn’t make. That goes for any person.

As artists we create by emotion and things that hit home for us. Not everyone understands, as art is subjective. We are tired of the hate, judgement and injustice. Seeing the noose wasn’t meant to make people think of a certain race being hung. It was left empty to represent that we refuse to be judged and hung in a non-literal sense.

To choose to walk away from the artistic hate trying to take our freedoms away. This originated from personal experiences, and we wanted to create something that had purpose and meaning. We can’t help that most haven’t been able to see past that.

Images of nooses are used in many ads/art covers. So why target us? We used it in a metaphoric way and meant no harm in doing so. Some choose to see only what they want to see. In our art industry it can be very catty and negative and we ourselves, as well as other artist, have been ridiculed without even having a chance to be heard. It also is for the artist going through personal battles. Its representation has nothing to do with the actual hanging events taken place in history or present. We are huge supporters and advocates for the unheard and will continue to be.

We also will be donating a percent of proceeds from this not-yet-released collection to charities that support equality and artists. Maybe even a scholarship fund. We do apologize if seeing the noose in a tree inflicted horrendous thoughts. We want to fight for justice and equality and make it known we are no longer following the leaders of hate or bullying/attacking of others.

We take concerns VERY seriously and understand our choice of graphic may have been too much for some, and that is not what we want. We understand some are more sensitive than others, and that is okay. We have decided to change the image out from one of our fellow artist who has used art to get her through some very hard times.

We understand many have been outraged by the image, however we also witnessed MANY horrible behaviors by users: our personal lives and even family members have been threatened with harm and that is not OKAY. Such behavior only allows hate to continue. It will not make for a cure.

This world will continue to stay ugly if we don’t stop the hate. We are all equal, we all have a story no matter our color, origin or sex. It’s up to us to make that change.

Again we apologize for any hurt feelings as that was not our intent, we are taking means to remedy the graphical issue or of respect for those offended.

This whole thing has turned into a strange case study on why it’s important to be sensitive with business decisions and smart with public relations in the midst of controversy.

Culture, Industry, News
controversy, hanging, outcry, racism
Related Articles
Discussion
Trending Articles
Great Grey Owl Lands on Wildlife Photographer’s Camera
May 11, 2022
Camera Films Itself Getting Launched Out of a Centrifuge at 1,000mph
May 07, 2022
Crocodile Dad Gives Over 100 Babies a Ride on His Back
15 hours ago
Billions of Fireflies Light Up Indian Tiger Reserve
May 14, 2022
Ukrainians Say Russia is Still Tracking Their Drones with DJI AeroScope
May 13, 2022