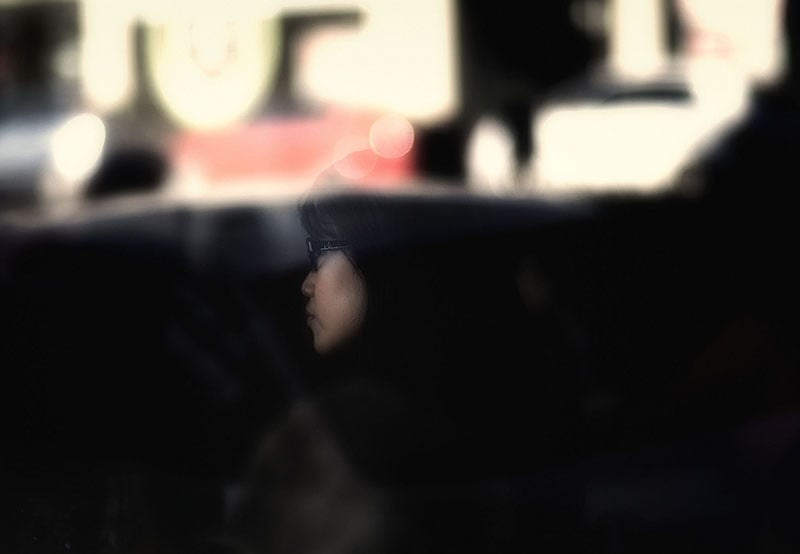 In photography, many of us start our journey by studying and learning from the masters of the art. But my belief is that many of us will eventually develop a desire to create their own personal photographic style, rather than just copying others. This requires experimentation, learning, effort and creativity. In my case, I approach photography as an art form, not just a mechanism for documenting and recording events. This more expressive approach influences my work greatly and my ability to use photography to express myself artistically is the thing that constantly challenges, engages, enthuses and energizes me. Oh, and did I say frustrates?

What really counts for me is the creative process itself and ultimately what is important is whether I like the resulting image. I understand that not everyone approaches photography in this way and that is fine but this is my way so it is all I can tell you about. What this article is about really is the need for photographers to develop character and style in their work and in particular I would like to demonstrate the role that mood can play in image making as a part of this.

Although like many photographers, I started “serious” photography by shooting black and white, my preferred style now most often involves using color because I find it lends itself better to artistic interpretation for my type of work. This is not invariably the case though – I like to let the image “decide” if it wants to be in color or in monochrome, if that makes sense. It is a simple fact of life that some images work best in monochrome and some in color. Part of our job in image making is to work out which is which. So I usually shoot in full color then convert later if needed. Here is one where monochrome seemed to work better to convey the feeling I thought the image was crying out to convey – solitary, thoughtful, a little gloomy. I can’t say it’s a perfect photo – it has too many blown highlights for that, but it has mood in bucket loads and that is what I wanted. 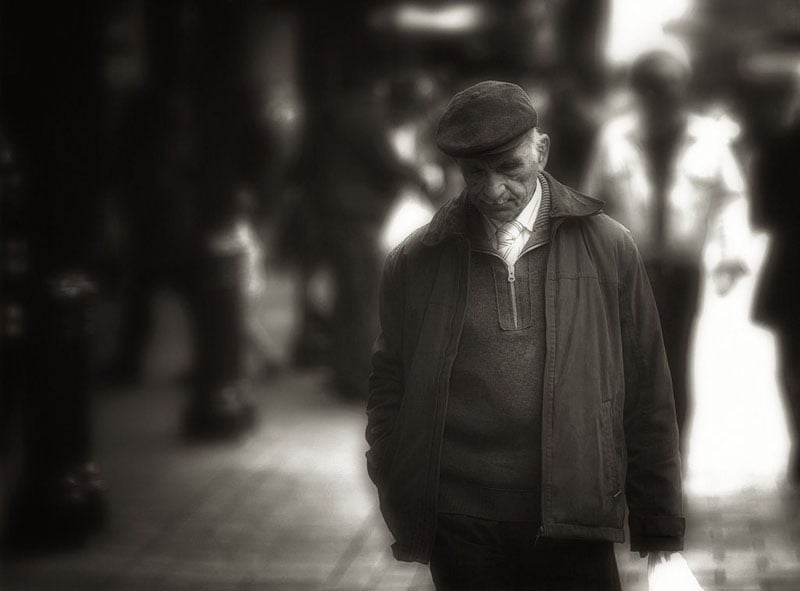 I always feel that photographs are at their most interesting when they require some degree of interpretation by the viewer. And as I have already hinted, as much as anything this is about creating mood in images rather than just capturing a scene accurately. It is about what is suggested in the image more than what is recorded. My personal belief is that this kind of photography is at its best, not necessarily when the images are technically perfect, but rather when they either capture or create a mood that “speaks” to the viewer. of course a viewer may interpret my photographs as having a very different mood or message from the one I intended, because of course the viewer will interpret the image through his or her own eyes and own experiences.

Here is a color example I happen to like very much. Like many images that I like the best, it is not technically perfect. And like many presented here, it was shot through a window and as a result is distorted and softened by flare and reflections. Technically it may be questionable, but artistically I feel it works. This image reminds me very much of early autochrome color images which have a lovely softness and pastel quality. And it has a lovely intimate mood which sets me thinking: who are they, why are they here, what are they talking about? That is exactly what mood should be able to achieve – set the viewer thinking. 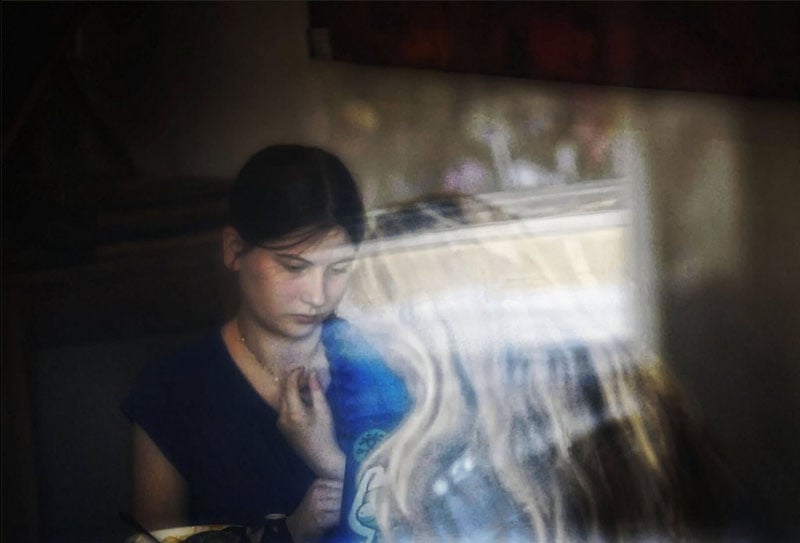 I am happiest with my own photos when they are somewhat ambiguous (one reason I often make liberal use of reflections when I can – think Saul Leiter who had a similar approach for, I imagine, similar reasons). I think of a good image as being one which allows room for viewer interpretation as I mentioned earlier. Here is another example. Again, it’s an image of a group of people in a warm café; sitting, passing the time, drinking coffee and enjoying each other’s company. Once more, critics could be forgiven for saying it’s a bad photo – excessively dark, soft, indistinct and vague. But these are exactly the things I love about it. It has an intimate mood that draws me back to this place and time. Hopefully it does something similar for others who may remember times when they have sat amongst just such an intimate group of friends. Once more this photo is all about its mood. 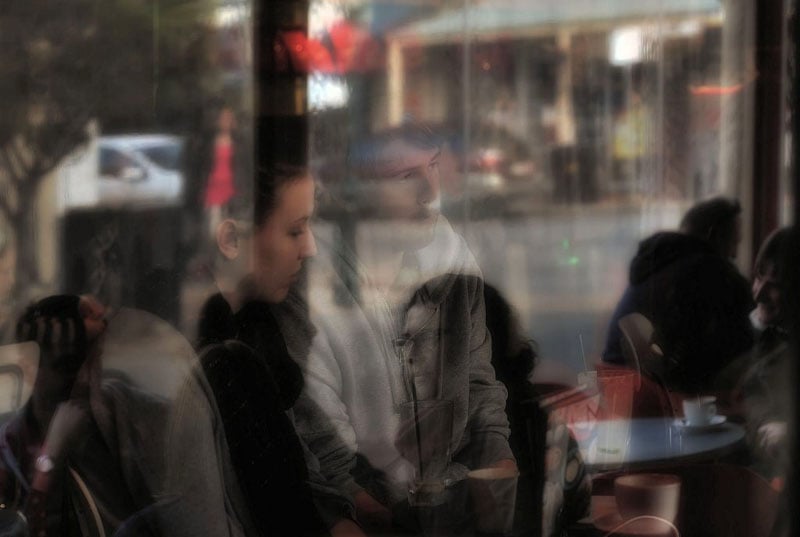 Why is it that looking in through a window on a scene so often creates that feeling of intimacy and warmth? I find this again and again – it is like looking in on a secret and private world. Here is a further example, an image that speaks to me once more of comfort, intimacy, congeniality and friendship. 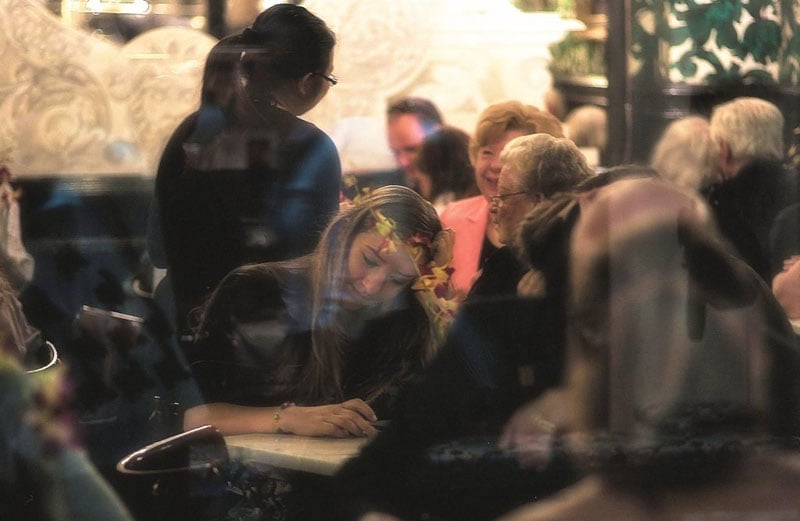 Of course the same technique can be applied in other settings. In the following two images, shot through windows in Kowloon, Hong Kong I captured the staff of two of the many small restaurants that line the streets in this part of town, at work in their kitchens. Shadows and light complemented by the blur of steam on what probably has to be admitted were grimy windows transport me back to my time in that place. To me this type of travel photo is more evocative than any number of wide-angle scenes of iconic buildings and skylines, perhaps because the images’ human scale because they capture the feeling of the places depicted. They are photos which make the most of mood and looking at them transports me back to that place and time. This is what mood can do when it works for the viewer. 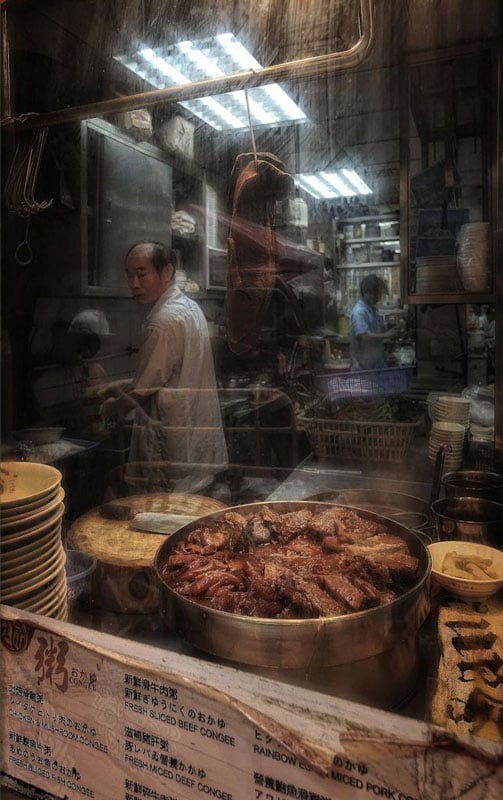 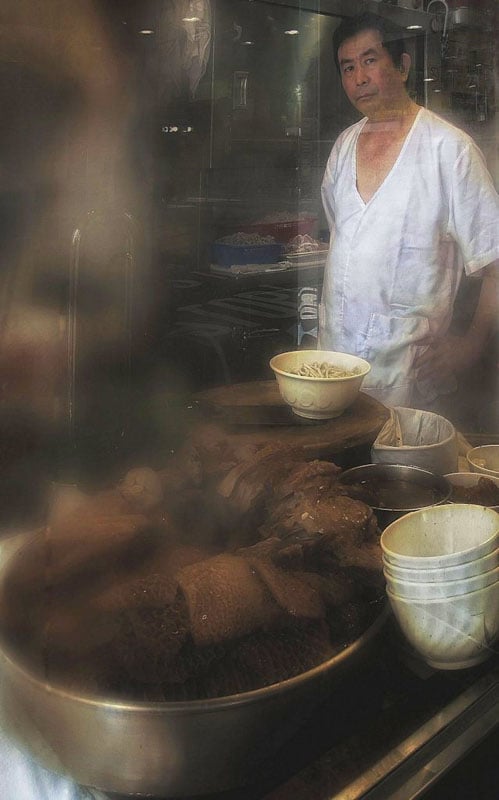 But of course, mood does not always rely upon reflections in a window. In the following shot my aim was for the image to be about the triangle made by this mother’s face, her hands and the face of her child to emphasize the relationship between them. So after making the image I applied a vignette to emphasise those elements and not much else – perhaps just enough to give context. I have often felt that in image making a successful image is as much about what you leave out as what you capture. And that is a key creative choice that photographers should keep in mind. 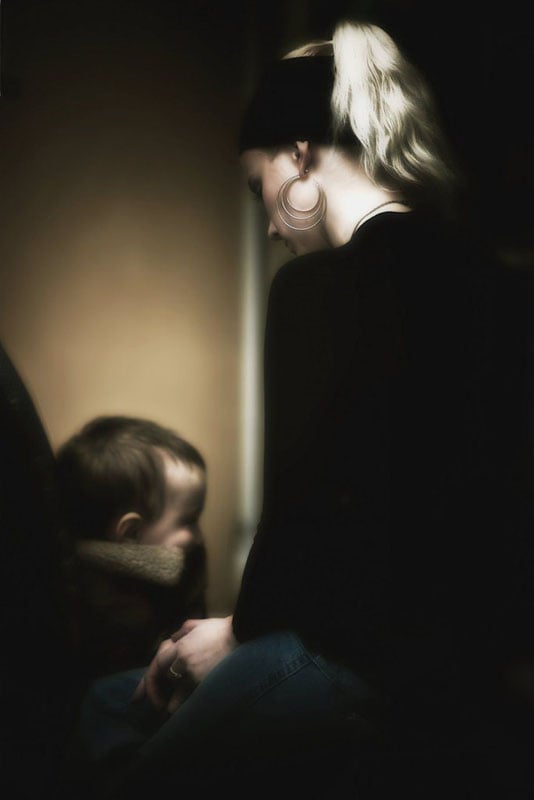 The same kind of technique can be successfully applied to other types of photograph to create mood. In this image of a city skyline, the natural shadows have been enhanced to focus the eye where it needs to be – on the juxtaposition between old and new as represented by the buildings in the image. 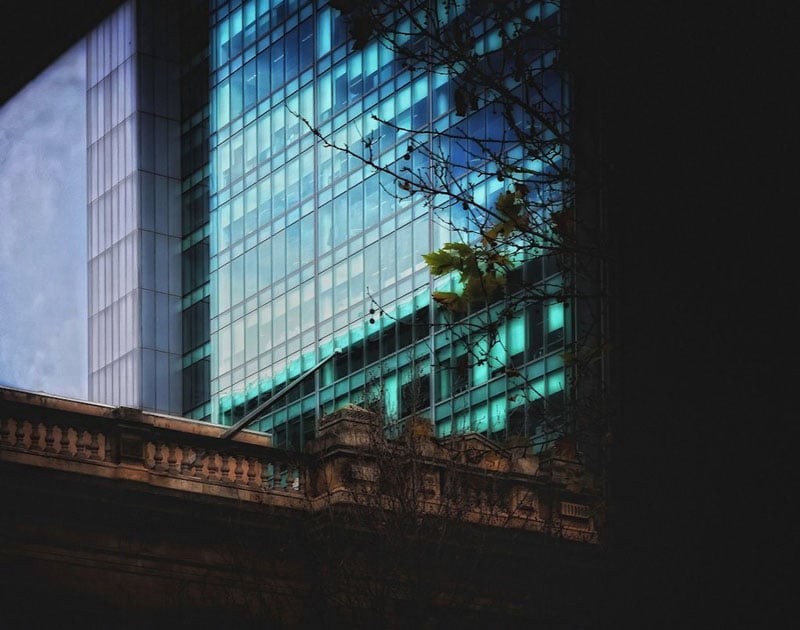 In all of the above images there has been some degree of post processing to draw out final image. Perhaps it is surprising for many people to learn that the processing has involved taking detail out – not maximizing it. As I said at the outset, to me a photograph can often work best when it is a little ambiguous and allows room for personal interpretation by the viewer. This can often only be achieved if the image has lost some detail that might otherwise distract the viewer from the main message or make the main point of interest in the image less obvious. But there are times when little effort is needed to achieve this.

Sometimes, as in this photo all you need to do is to rely on natural light to capture the mood that was present when the image was made. And then maybe tweak it a smidge in post. 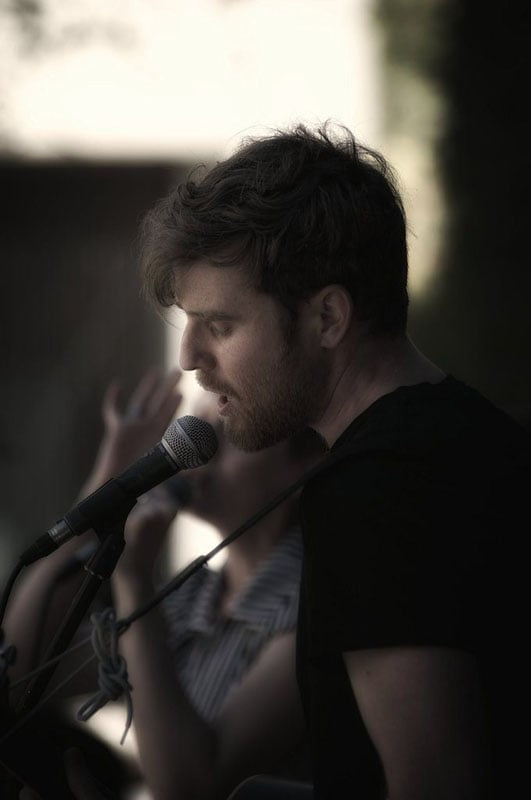 But I can never quite let go of the idea of using reflections so here is one final photo to illustrate a variation on this theme. In this example it was as simple as photographing the distorted image of a crane against the sky, with both elements reflected in a grimy upper story window of a warehouse. No tricks, little processing, just an image that is both vague and at the same time, somehow evocative. You may have guessed. I love reflections for their ability to create mood. 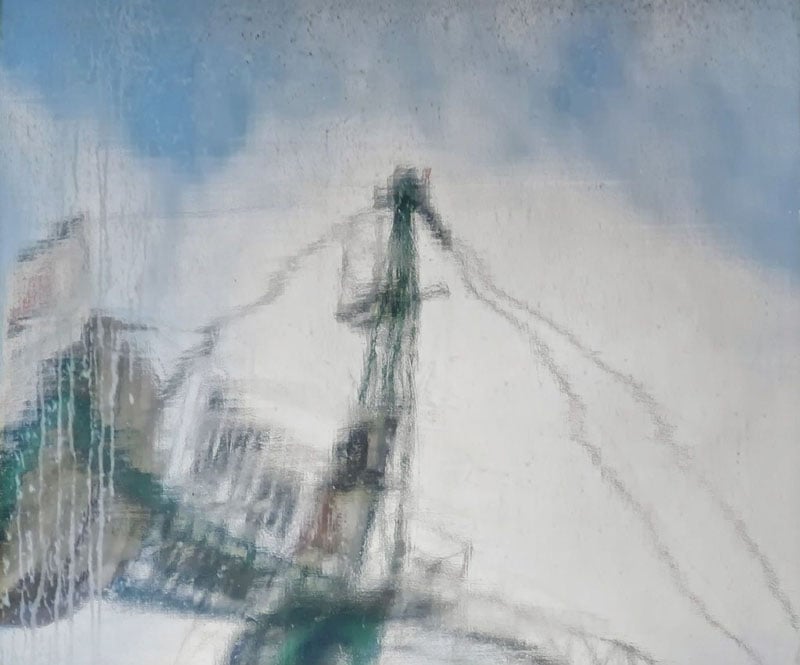 So there you have it, some thoughts on creating mood in photography to illustrate my central message of the importance of photographers creating a personal style for themselves. And of course to illustrate this I have shown you something of my own personal style. Your task is to find a style that works for you – a style which gives you a voice. And what about creating mood? Well, unsurprisingly I find that much of it is about using shadows and light. Speaking personally I just wait till I see an image that looks as if it is interesting then compose and press the shutter. Then when I am processing it and begin to see an image emerging that I like, I may add a bit of shadow here, subtract a bit of light there – or visa versa, till I am happy. No secret, just experience and a certain sensitivity to an image that in some way makes me go “wow, I like that, I think I will stop now!”

I recently found a photography book containing photos of Australia in the 1950’s and 1960s. A sentence in it caught my attention, part of which referred to “the ability of a lens to give a vision not seen by the eye”. How true that is. If we are doing our job right as photographers we will sometimes manage to capture an image that no eye, including our own has ever seen. We have caught a moment in time and when we first see the photo realise we have really seen it for the first time. I am sure we all have had that experience and am constantly amazed by the ability of photography to do this. But my central idea in this article is that even though a photo can capture something not seen directly by the eye, if done well it can tell an even deeper truth about the image by speaking directly to our emotions. That is the elusive frustrating demon I constantly chase. Maybe we all do.

I hope you have enjoyed this and even more, I hope you have found it useful or at least thought-provoking. More of my photos can be seen on my Flickr page. Nothing fancy, just photos from my everyday life and travels. Some good, perhaps some indifferent, but I hope not many that are bad.

About the author: Peter Maynard is an Adelaide, Australia based amateur photographer who has practiced photography more or less seriously for some 25 years. Technically he mostly uses Nikon and Leica “kit” (with some small format digital cameras thrown in for good measure) but principally approaches photography as an art form rather than as a technical discipline. Accordingly, his interest is not so much in recording events or scenes but rather in interpreting them in a manner aimed at producing images that engage the viewer. He shoots mainly in color with occasional excursions into black and white as the interpretive needs of the image dictate. It might not come as a surprise, therefore, that his favorite photographer is the late Saul Leiter. You can find him on Pinterest and Flickr. This article originally appeared here.

The Disorienting Beauty of Spiral Staircases in Old Abandoned Buildings