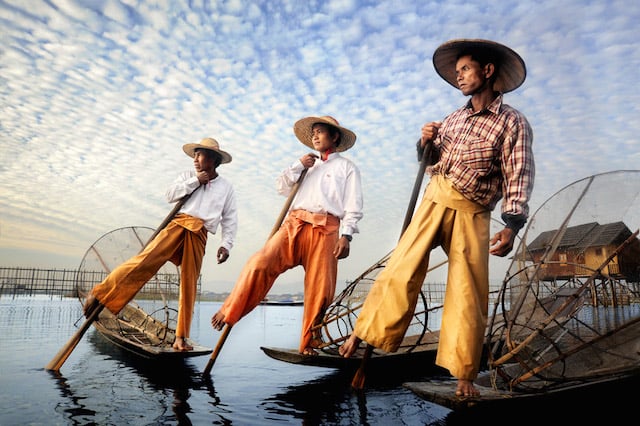 People often tell me that they find it difficult to take good portrait photos when they travel. Approaching strangers and asking to photograph them, usually with a language barrier, can be a daunting prospect. And how do you take a portrait that is creative and meaningful rather than just a simple snapshot of the person? I have developed approaches and techniques over the years to help become confident as a travel portrait photographer.

There are three ways to create a travel portrait:

1. Encounter people that you meet while exploring a place and ask to take their photo, usually after an initial interaction. This is how I’ve taken the majority of my travel portraits.

2. Organise a shoot by paying ‘models’ for their time which involves some kind of meeting and prior planning. I’ve done this on a few occasions, such as shooting the Masai in Kenya, the fishermen at Inle Lake in Myanmar, and some of the Amazon portraits in Brazil.

3. Shoot without any interaction with the person in a documentary/reportage style. Perhaps the most common approach, but it is hard to capture engaging facial expressions and there’s little control over the elements of the scene, which is why very few of my portraits are taken like this.

Let’s focus on the first method which is all about approaching people that you encounter while traveling.

It’s important to meet and spend a bit of time with people before bringing out the camera and asking for a photo. I try not to show any photography gear when exploring new places so as not to create distance or set up any preconceptions during initial encounters. I use a sling style bag that houses my non-elaborate one camera and lens set up that I like to use (currently Nikon D800 with Nikon 24-85mm lens).

It does take time and patience to establish a connection with local people, and you might need to be with them for a while until the best possible shot presents itself or becomes apparent. It’s important to be traveling solo or with fellow photographers who are prepared to spend a long time in one place.

Making eye contact with people, smiling, interacting and being jovial is the key. Perhaps using gesture and expression, try to comment or ask a question about the person or the place they are in to start an interaction. This could be referring to the clothes someone is wearing, a game people are playing, or food someone is eating or selling, for example. Any opportunity to interact and establish a relaxed and informal atmosphere to develop personal connection is very useful before bringing out the camera. Learning some words or phrases in the local language can also be a good ice breaker. But it is the facial expressions and actions that are most important when you don’t speak the same language. Smile, engage and show interest in the local people you encounter!

Once this connection has been made, you could ask the person if it’s ok to take their photo (by using gesture and expression) and they will probably agree, whereas it may not have worked out if you hadn’t initially made this connection. It is also important to try to meet people who you don’t necessarily plan to photograph, as you never know what it might lead to. You may be invited into someone’s home, or toured around a place of work or ritual, for example. Being with your new local friend(s) it becomes easier to ask people you encounter for photos, because they will ask these people in the local language and help you out, making for a very useful way to get portraits of people you may not have otherwise met or felt comfortable approaching.

The most successful portrait photographs usually feature faces that are full of character, engaging, beautiful, interesting or unique. If you come across someone with a face that you think will be powerful in a photograph, try to imagine how you might photograph them and then try your best to engage with them or the people around them and then ask if you can take their photo. If you are smiling, polite and light-hearted in manner, more often than not they will happily say ‘yes’. Then, it’s up to you to give a little bit of direction to collaboratively and quickly create the portrait that you envisioned.

When you have a person happy to be photographed, it is important to be ready with posing ideas in your mind. Instead of simply taking a photo of someone in the place and position they are already in, it is often better to move and direct them to some extent for a more artistic and powerful result. I always look around the space and think ahead, trying to find a good background while considering the light, and I roughly imagine the shot in my mind. This is also happening before I have anyone to photograph, which means I’m more prepared when shooting someone and I can move quickly and with confidence, which in turn keeps the experience enjoyable for the subject and they will feel comfortable following your direction.

1. Lean on a Surface

Have the subject lean on something, especially in close up portraits. This will make their posture appear relaxed and engaging. Standing straight and upright with the shoulders down may not engage the viewer quite so effectively. The surface can be a chair, table, and often I get the subject to sit down and use their knee to lean on. Leaning on something relaxes the person down and keeps them still, in a way that standing upright is perhaps more difficult and the subject is more likely to move their head or change expression.

It is good to have the subject touch or interact with something around them, preferably an object that says something about their culture or who they are. Physical interaction is also another posing idea I’m always thinking about, either with oneself or with another person. In this example, I’ve got the Masai boys to rest their heads on their hands and arms for a personal interaction as well as with the tree.

Taking photos of people engaged in an activity can help make for images that tell a story. At times you may stumble on a person already doing the activity, and other times you will have to creatively construct the scene yourself. It is also possible to go one step further and organize a shoot, and usually this involves some payment for the subject’s time. Out if this, you can get great activity photos that you have full control over creating.

It’s good to capture a range of expressions in your portraits, and ‘smiling broadly at the camera’ type photos are nice but depict only one emotion. Often you will need to tell the subject what you want, and it’s good to demonstrate this so they can copy you. It’s interesting that by asking the subject not to smile, and therefore looking neutral and potentially expressionless, the subject can portray seemingly deep and reflective emotions in photography. Sometimes you might want the subject to look off camera, and in this case point to an area for them to look at. Try a few different angles as slight changes in head tilt make a big difference.

Having something close or touching the face in a close up portrait can be extremely powerful. This object could be many things, including material such as a scarf which creates a frame around the face.

Try to imagine a shape or pattern you could arrange your subjects into, for interesting and creative compositions.

I usually make a decision if the shot will be a close up of the face that fills the frame, a mid shot of the person and some of their body or a wide shot of the person also showing their environment. Once I see the shot roughly in my mind – I can go ahead and create it.

The eyes are the focal point in any close up portrait. It’s important to frame them in one of the thirds, usually the upper third of the frame. They need to be clear and sharp. If you use autofocus on the camera and let the camera find a focal point, there is a good chance the camera will choose something else like the nose to focus on, but it’s paramount that the eyes have pinpoint focus. Here’s what I do – I have my camera on autofocus but on centre point focusing mode. Not only do I frame the eyes on the centre dot while it is auto focusing, I zoom right into the eye and aim the central point on the iris or eyelashes. Once that’s in focus, I hold it with the shutter half depressed, zoom back out, recompose the shot and take it. This is how I can aim to get the eyes as sharp as possible, alongside keeping the camera steady and making sure there is decent natural light on the subject.

Post processing of images is a very important step for me in the final creation of each photograph. Using Photoshop, I work on the photo to enhance light to my taste by brightening parts of the image and darkening other parts, done using adjustment layers and layer masks. In the same way I also work on getting the colours to be as complimentary as possible throughout the entire photo.

This can involve boosting and decreasing saturation of specific colours on specific objects or areas of the photo, depending what needs to be done as I originally saw it in my mind’s eye. In the example below I removed the shades of blue from the plate, eyes and wall behind (reflections from the sky), brightened the lady’s face, eyes and clothes, and darkened the background. I always like to keep certain lines and some shadows very dark on the face, to contrast alongside the strong brightening to give definition and clarity to the subject.

About the author: David Lazar is a travel photographer and musician from Brisbane, Australia, who captures moments of life, beauty and culture in his photography. David’s portraits and landscapes from around the globe have been published in National Geographic, Lonely Planet, in-flight and travel magazines. In 2014 he was awarded Best Culture Photographer by Garuda Airways, on a visit to Indonesia.

You can see more of his work by visiting his website or following him on Facebook. This article originally appeared here.

PSA: Why You Need to Be Careful When Placing a ‘Preorder’ with PayPal