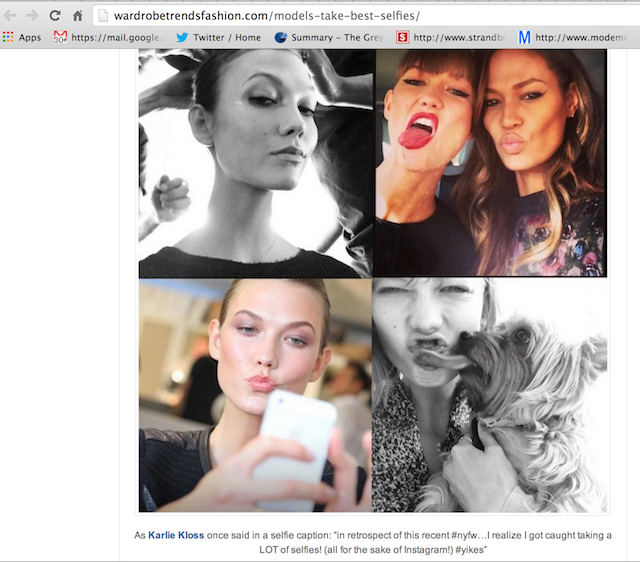 This post is something I’ve struggled with for months, and debated even writing. But it’s time to share my story, and explain why I’ve been absent.

Basically, the short version is Karlie Kloss improperly used one of my images. It showed up on her Instagram account last September, without credit. (Point of reference: many of the images before and after mine are credited.)

As readers of my blog will know, I shoot as a house photographer for Oscar de la Renta’s social media accounts and Pinterest page. On September 10, 2013 I took this photo of Karlie Kloss taking a “selfie” backstage at the SS14 Oscar de la Renta show: 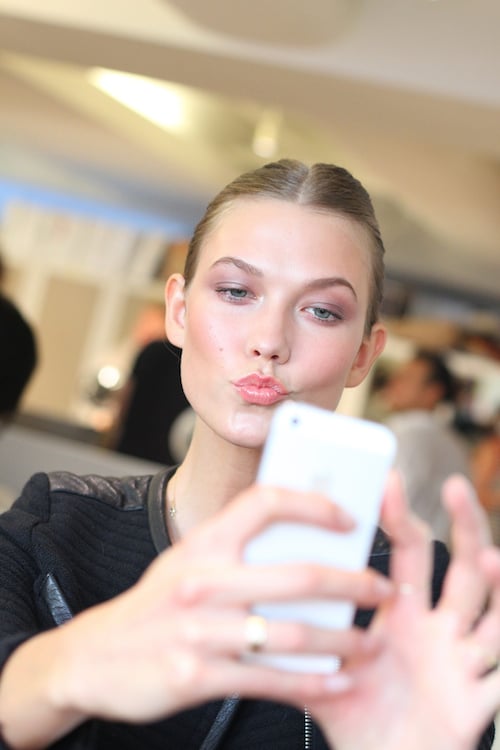 No other photographers were in the makeup area at the time, guaranteeing this was an exclusive shot.

When I got home, I posted it as part of my daily “sneak peek” show recap.

The next night, backstage at the Anna Sui show, I approached Karlie and showed her the image on my phone. She seemed very excited, and mentioned how much she loved it. When she asked where she could find it, I gave her my business card with my blog’s address.

A few days later, Karlie Instagrammed the image, leaving out a photo credit. 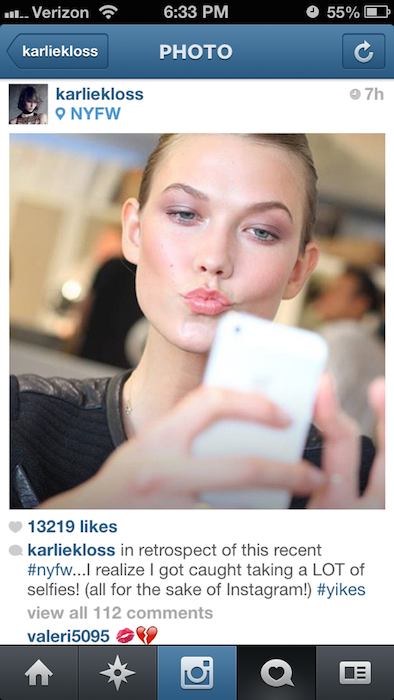 Not knowing any other way to get in touch with her, I commented on Karlie’s instagram hoping she’d see it in the sea of many many other comments. After a few days, she did, writing me an apology for not crediting me initially. 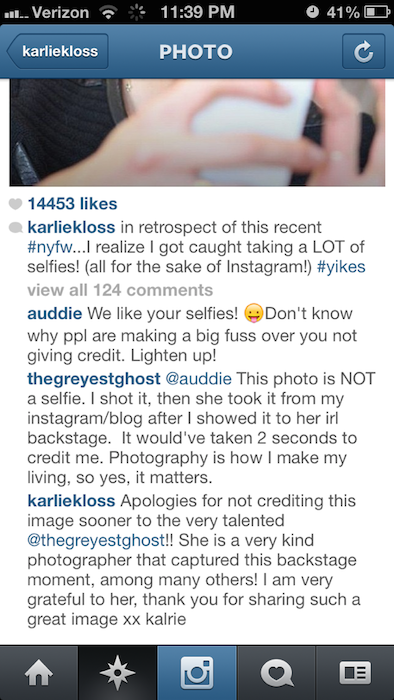 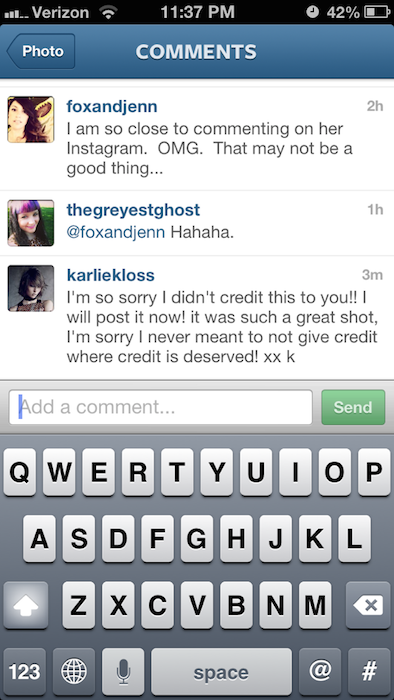 At this point, I was sad so many (now it’s about 16,000+) people saw the image without my photo credit attached. But there wasn’t really much I could do.

November 2013: I ran into Karlie backstage at the Victoria’s Secret fashion show, and after bringing up the incident during our conversation, she apologized. I assumed that was the end of things.

March of 2014: I got a text message from a friend. She was at the airport, reading LUCKY and spotted my Karlie Kloss photo in an article about Selfies published in the magazine. I soon found the image on LUCKY’s website as well.

After emailing LUCKY, they reposted the image with credit, and compensated me for the usage.

April 2014: The image appeared AGAIN on Harper’s BAZAAR’s website (in a nearly identical article, which was in my opinion strange, but whatever). 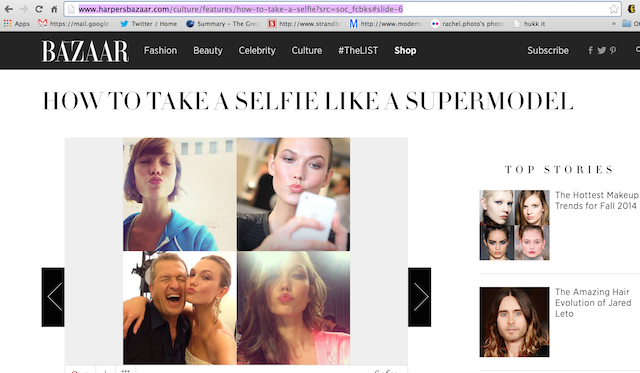 After a lot of emailing back and forth, my image was removed, and I was compensated for the original photo usage.

At this point, I was relived to have settled the first two cases of improper image usage/copyright violation, and ready to move on with my life. And then I found the image on dozens of other websites, from around the world.

Plus countless other blogs, another professional photographer’s website, a stylist’s website, and more. There are over 19 pages of links for my photo when you do a reverse Google image search.

Unfortunately, this photo is never going to stop showing up online and throwing a wrench into my everyday life.

July 2014: An eagle-eyed friend spied my photo, once again, in an article about taking “selfies” on ALLURE.com. 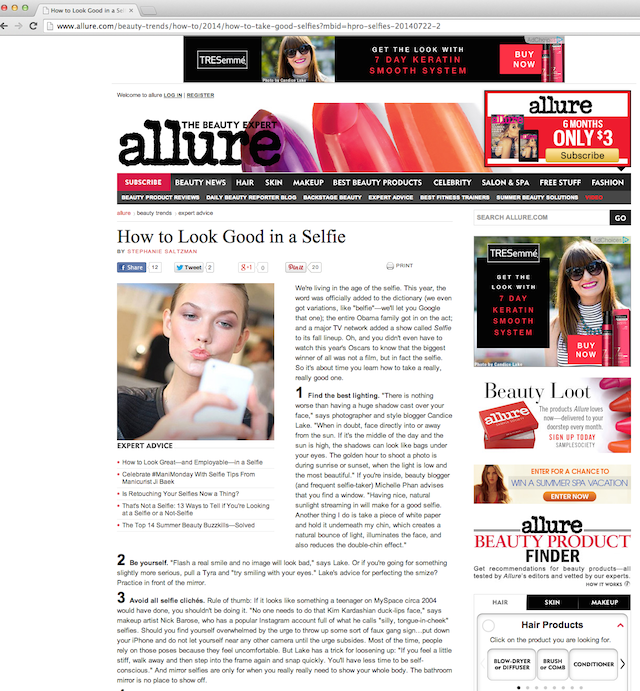 I am currently emailing back and forth with ALLURE editors, but needless to say, it’s not going well.

Why does any of this matter? After the drama involved in constantly policing my work’s usage, and health issues, I considered giving up photography indefinitely. Or at least blogging about it. I’ve been shooting since I was 13 years old (which is now over half of my lifetime), and it’s been amazing to fulfill my dream of photographing some of the best designers and models in the world during the past 5 years of New York Fashion Week. I started to wonder what the point was. If I’m working my a** off, only to have people steal my images and run them in major publications uncredited or compensated, is it worth it???

I do the majority of my fashion week work on spec, meaning I get paid after the fact. No one is giving me hundreds of dollars to attend shows. I work alone, doing all of the requests, scheduling, planning, and post show marketing & publicity myself. I make my income selling images (mostly backstage beauty) after the fact, and shooting editorials and portraits the rest of the year.

The sad thing is? This happens all the time. And the attitude amongst many magazine editors (many, not all) is that it’s ok to just say “oops sorry” and delete the image. That’s not how copyright works. I worked as a photo editor for 4 years at multiple magazines here in NYC. Had I implied that it was ok for me to use a photographer’s image without payment or credit, I probably would have been fired.

There are also plenty of celebrities and models who think using images without permission or even a credit on their blogs/websites/Instagram accounts is OK. It’s not. If this has happened to you, I encourage you to check out Photo Attorney for great advice. And yes, before anyone asks me, I have contacted a lawyer.

If I had been credited in the first place, I would have received what amounts to major publicity, and had publications contacting me directly to license the photo.

In the end, the fun fact of all of this is that right now, I’ve lost what amounts to hundreds, if not thousands of dollars in image licensing fees thanks to one Instagram post. Add onto that potential legal fees, and it’s one giant headache that will probably be continuing on for months of my life.

All because Karlie Kloss used my photograph and neglected to credit me properly.

About the author: Rachel Scroggins is a NYC based fashion and portrait photographer. A former magazine photo editor, she has produced celebrity photo shoots, and photographed over 300 fashion shows for some of the world’s most prestigious designers. You can see more of her work by visiting her website and blog. This article originally appeared here.

Photographer Captures Incredible Photo of the Milky Way Above a Glowing, Bioluminescent Ocean