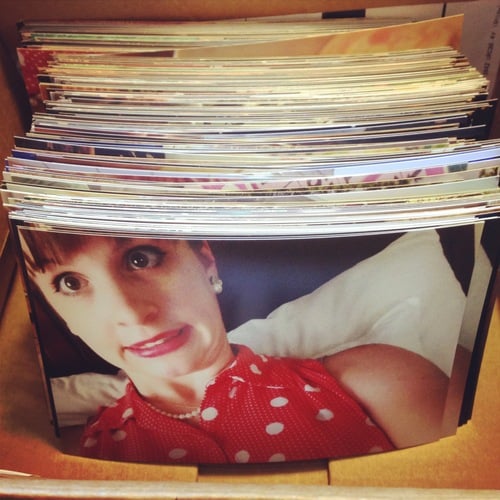 In a move that sent shockwaves through a quiet sleepy neighborhood, photos from an iPhone were printed onto photographic paper.

Lynn, a mother of two who refused to tell us her age, uploaded iPhone photos to a lab and within a week received back two bundles of 4×6 color paper prints. When asked the reason for such a drastic move, she explained:

“Our family went on vacation recently and I took tons of pictures with my iPhone. And I put them on my computer, and then my computer crashed. I was devastated. And I thought there had to be some other way to have a copy of what was on my iPhone. Something that wasn’t invisible. And then, I went on a field trip with my daughter’s class to the museum and I saw things on paper that had been around for hundreds of years and a lightbulb went off in my head. The answer was so simple.”

Lynn’s daughter, a 13-year-old who loves technology said, “Yeah, we were all surprised when mom showed us this box with pictures in it. At first, I didn’t know what they were; I thought they were greeting cards or something, but then I recognized them from her phone. It was pretty crazy. I was all, ‘OMG. I’m actually HOLDING a picture in my hand.’ I mean, I’ve held other stuff in my hands, but I didn’t know, like, you could hold a picture.”

“NOW I know what goes in those holder things stores sell with the words 4×6 and 8×10 on them, although I still don’t really understand how she got the photos from her phone on to the paper.”

Family and friends have been stopping by all day to marvel at the prints.

Said one neighbor, “When she first told us she did this, we took bets that she’d been drinking. Or she saw it on Pinterest. We couldn’t fully understand what she meant by ‘making prince.’ The only time we’d talked about that was after watching “Purple Rain” back in high school, and even then the words “making prince” had the words: “out with” in between them.”

“But then we realized she meant the other kind of prints, which seemed kind of stupid — why would you do that when you have a phone and a computer? But now that we see them, it doesn’t seem like a bad idea at all.”

About the author: Missy is a photographer, eater of bacon, drinker of vodka and your guide through the murky waters of professional photography. You can read more of her work on her blog. This article originally appeared here.

DIY: How to Turn a Canon Kit Lens From an EF-S to EF Mount