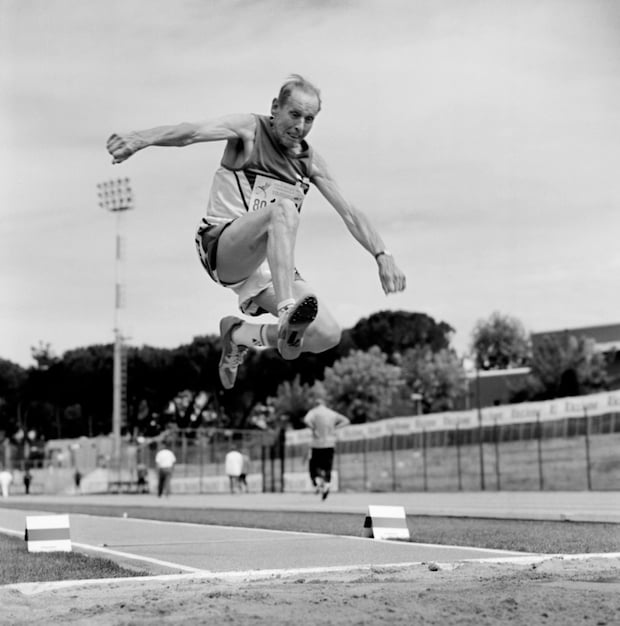 Documentary and portrait photographer Angela Jimenez‘ series “Racing Age” is not your typical ‘photos of old people’ photo series. There is no frailty, no struggling with day-to-day tasks or close-ups of wrinkles. The subjects in Racing Age are competitive athletes that could probably out-run, out-jump and out-throw most people half their age.

An award-winning photojournalist who regularly shoots for the likes of the New York Times, we caught up with Jimenez over email to see if she could answer some questions about herself and this photo series for us.

Originally, we were going to pull appropriate quotes and put the series in context that way, but she did such a fantastic job answering our questions that we’ve decided to reprint her answers in full instead.

Check out the full ‘interview’ below, alongside photographs from the series that Jimenez was kind enough to share with us. Enjoy! 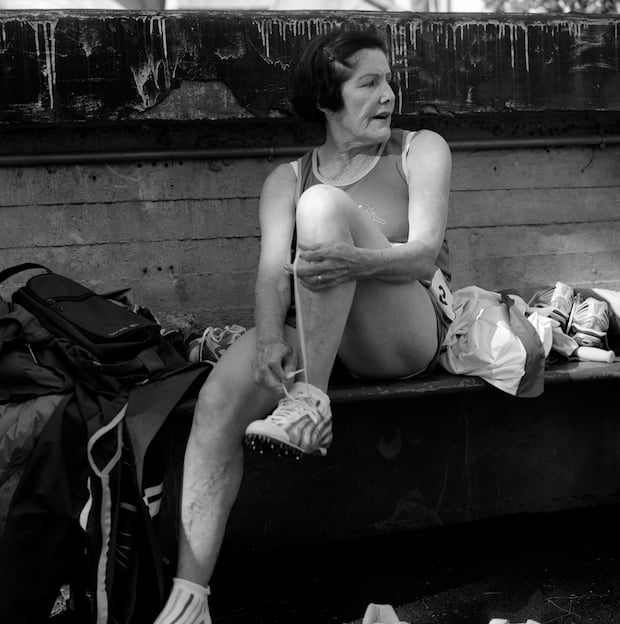 PetaPixel: Can you tell us a little bit about yourself as a photographer? How did you get into this profession?

Angela Jimenez: I am a documentary and portrait photographer, I identify with being a storyteller because that is what I love. It feels really sacred to me, telling people’s stories. I went to journalism grad school thinking I’d be a writer but I took one photo class with David Rees and I was hooked — I have a master’s degree in photojournalism from the University of Missouri-Columbia and interned at newspapers (the Arizona Republic and the Newark Star-Ledger) for several years.

For the past 12 years I’ve worked as a freelance photographer/photojournalist in Brooklyn where I shoot regularly for the Ledger and The New York Times. And I hustled photo work that helped support my documentary and project habit. 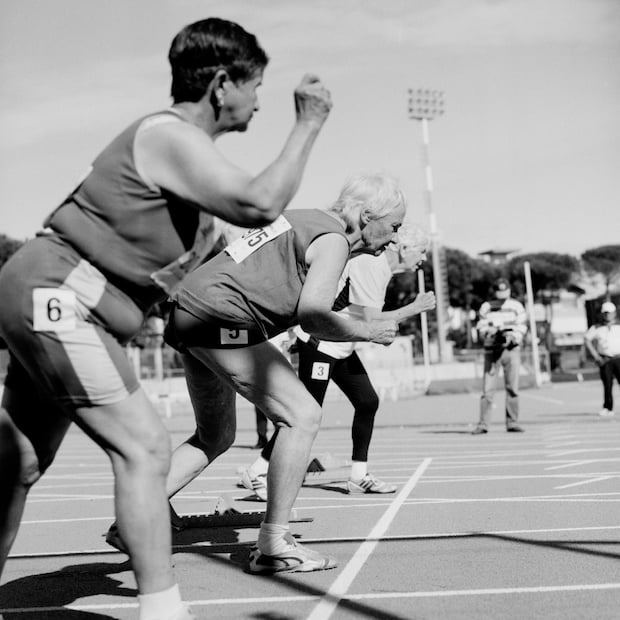 PP: Much of your work is documentary in nature. What draws you to this particular genre of photography?

AJ: The stories. People’s stories. I took one creative writing class in college and I was terrible at it. I have a very non-fiction interest in the world. Reality, and the complications and people’s lives, are so interesting to me. So much stranger than fiction. It is a real honor to do that kind of work — when people let you in and trust you to carry their stories. 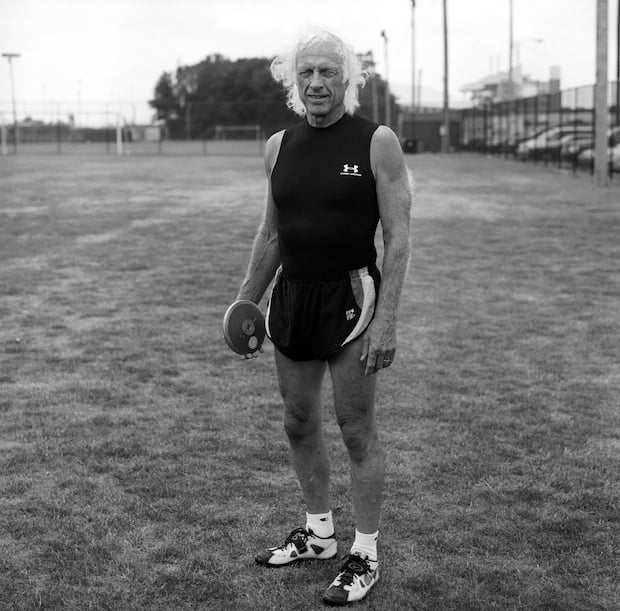 PP: What inspired you to create this particular series? Is there a story here?

AJ: I started this project in the fall of 2007. I knew about master’s track because I was a Division I collegiate Track & Field heptathlete at the University of Pennsylvania, and a former teammate was competing on the circuit. But I had never seen it.

On an assignment for The New York Times, I photographed a doctor who was doing experimental anti-aging treatments. He had a picture of himself on the wall in a track uniform. He told me there was a master’s meet in Kentucky. So I got in the car with cameras and a tent to camp nearby and photographed the meet. I went out of curiosity. When I got there, I felt like I had found something really honest and real. 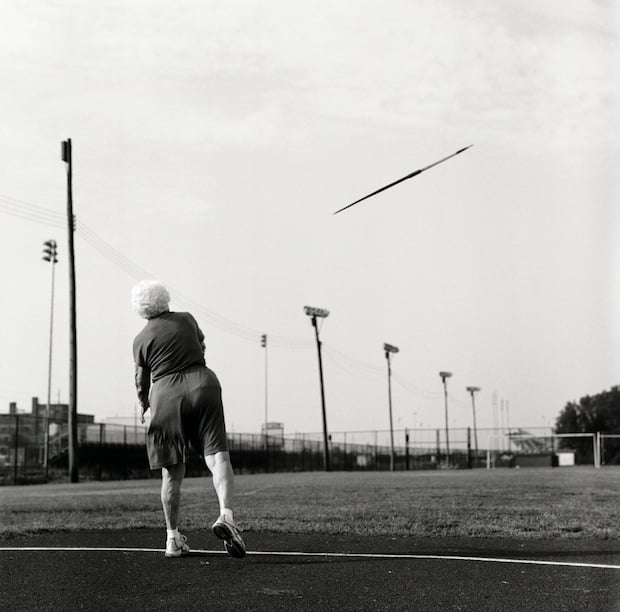 PP: The series obviously smashes the stereotypes of frailty that surround old age, was this your goal? What, if anything, else do you hope viewers get from the pictures?

AJ: I try to not have a “goal” in terms of convincing anyone of anything. I really don’t want to do that. My goal was to photograph the athletes in the peak moments of action and to have fun with it, but to also really take them seriously as people and athletes. Track & Field is a sport that I really understand, so I wanted to shoot portraits but the action, too.

Something really unique about Track & Field is that it measures the abilities of the human body very concretely: How fast can you run? How far can you throw? How high or far can you jump? The records in a each age group are like a record of what aging bodies can do. We are living longer and getting stronger, faster. So I wanted to get those peak moments, like the long jumper at the top of his jump arc. I mean, wow. 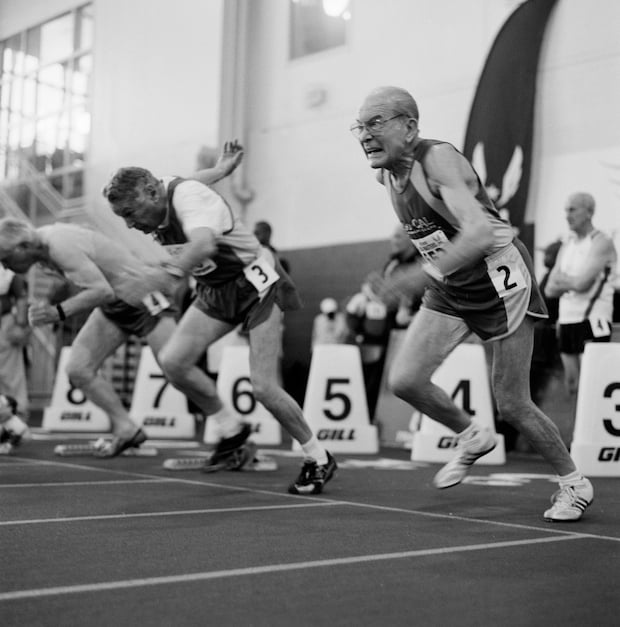 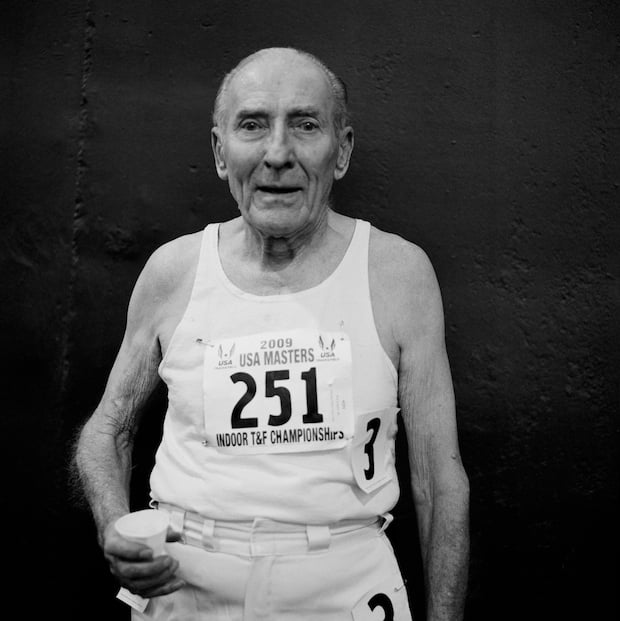 PP: Why did you choose to go monochrome for these images?

AJ: Black & white was my first language as a photographer when I was first learning to shoot at the University of Missouri-Columbia School of Journalism.

I was definitely influenced by Leni Riefenstahl’s olympic imagery — despite the abhorrent politics of them — but I did not want these images to be gimmicky, or to reinforce the “wise old sage” or “cute senior” stereotypes. These athletes are not simple or cute: They are fierce and competitive. It can actually be a bit scary to watch.

It’s not what you are you used to seeing an older person do. It is inspiring and brave, but also uncomfortable. In that way, looking at who they are and what they are doing feels challenging. But once I started shooting, it felt right. 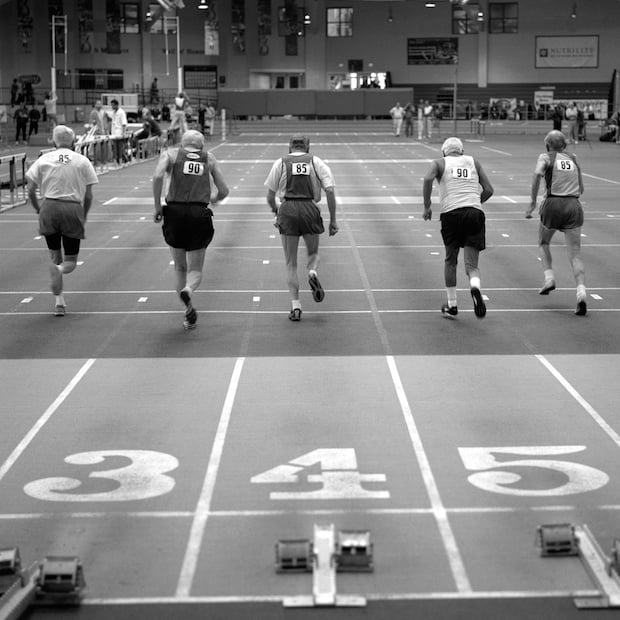 PP: What’s one interesting tidbit about the set, or experience you had while shooting it, that you think would surprise our readers?

AJ: Since folks are a lot older, I have trouble keeping in touch with them by email or something. So most of them I have just seen here and there, at meets. I am not sure of who is still living. I got contacted once by the relatives of a man in one of the photos. He had died and they wanted to put a photo of him competing up at his funeral. So I sent them a print. I was not there, but that was one of the most fulfilling ways I have ever shown a photograph.

I would say most of these athletes are physical anomalies, really clean living and healthy and able to do these physical things that most people just cannot do at their age. With some, there is a real surprising thing in that their minds are going a bit faster than their bodies. So subjects often do not remember me, or have a vague memory and we sort of need to start over each time I see them.

After I did the Times story, I had one subject who kept calling and calling me to see the piece. He just could not retain that he had seen it. But that’s okay. I mean, I watched him run a long distance race. That was just what was happening for him. 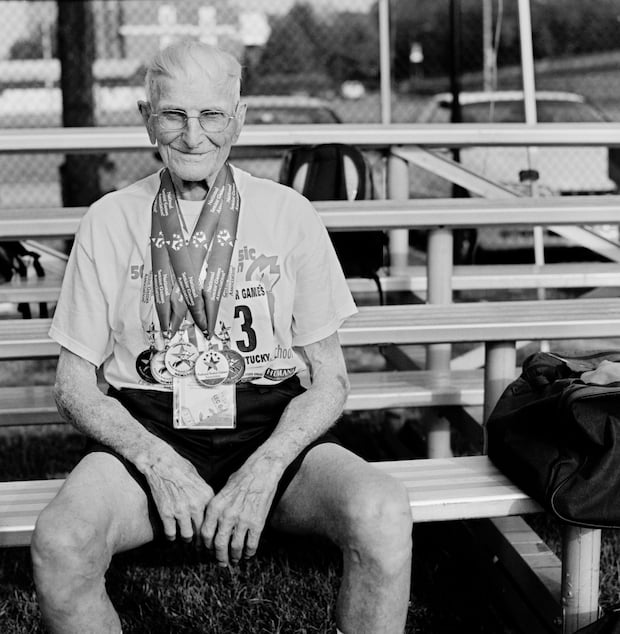 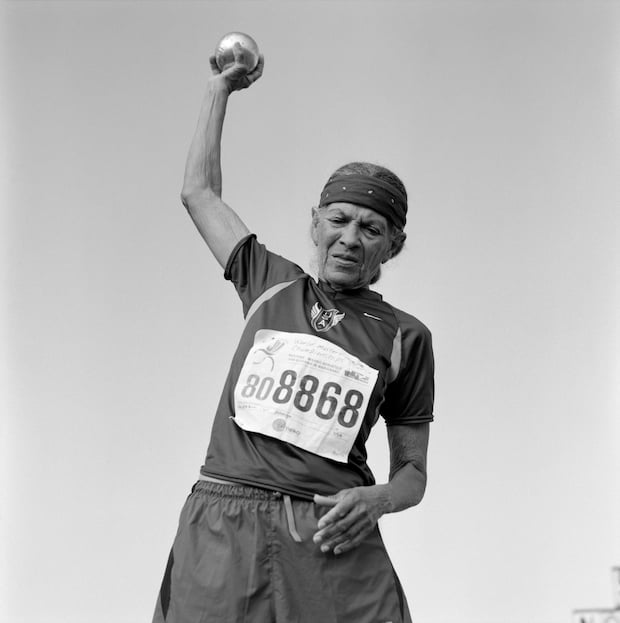 PP: Getting technical, what gear do you use?

AJ: I am shooting this project on a fully manual Hasselblad 503cx on Kodak black & white medium format film. I made that choice when I went to that first meet in Kentucky. I was doing a lot of daily newspaper assignment work on the time, all as DSLR color digital. Lots of images, quick turnaround. I wanted to slow things down and be more deliberate.

I thought of the more mechanical technology and the black & white imagery as a metaphor, too: I will give myself a slower and older body to work with. That is what the athletes are working with, too. So I have shot this all on this heavy old, manual camera with no internal light meter and 12 frame rolls of film with no assistant. 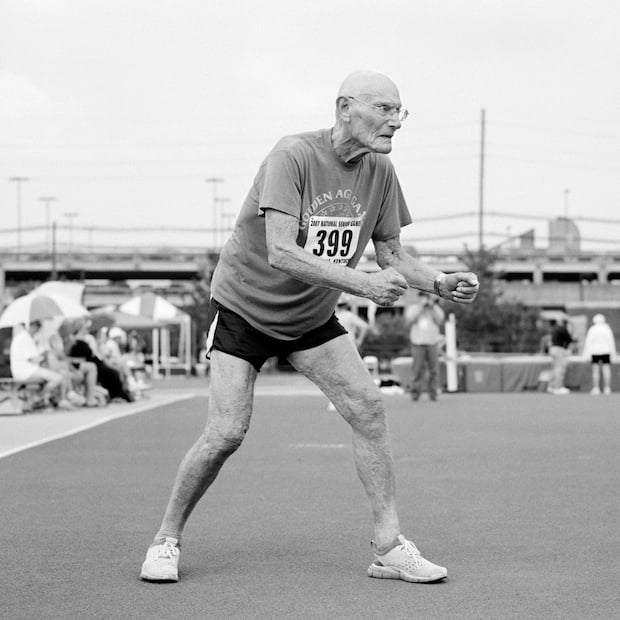 PP: What sort of post-processing do you typically apply?

AJ: I scan these black & white negatives as RGB files on a drum scanner (I have used the one at the International Center of Photography because I work as a teaching assistant there sometimes and get digital lab hours) and then desaturate and use traditional darkroom techniques in Photoshop to set levels, contrast, etc. Almost all are shot full frame and use photojournalism ethics: no removing or moving anything. PP: Finally, as a successful, award-winning photographer, do you have any tips or advice for aspiring photographers who would like to be doing what you do?

AJ: This is a tough question. As for making a living, projects and freelance journalism are really fulfilling but you will have to do other work to make a living. As for the sustainability, do work you really care about, that comes from sincere interest. And find some support and community around the work, and the lifestyle that results from doing it. Both those things are always a challenge. I feel glad and grateful to still be shooting, but I feel like there is so much more to do. 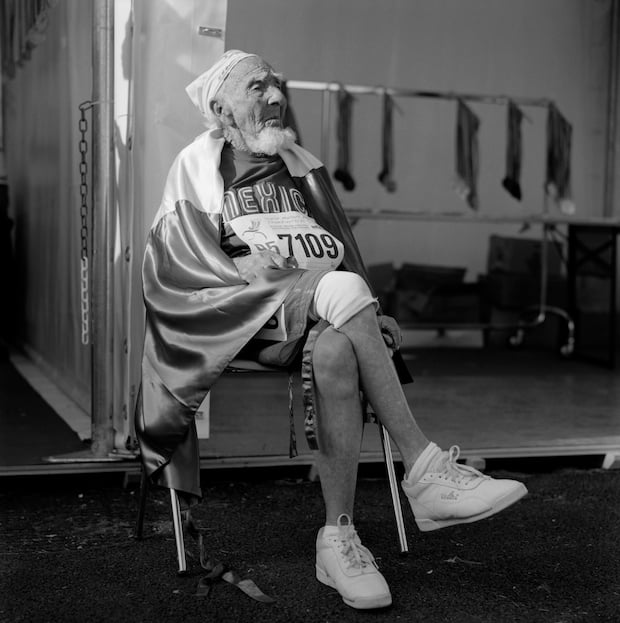 We want to thank Ms. Jimenez to taking the time to answer our questions and sharing these awesome images with us. To see more of her work, head over to her website or give her a follow on Instagram.

Image credits: All photographs by Angela Jimenez and used with permission