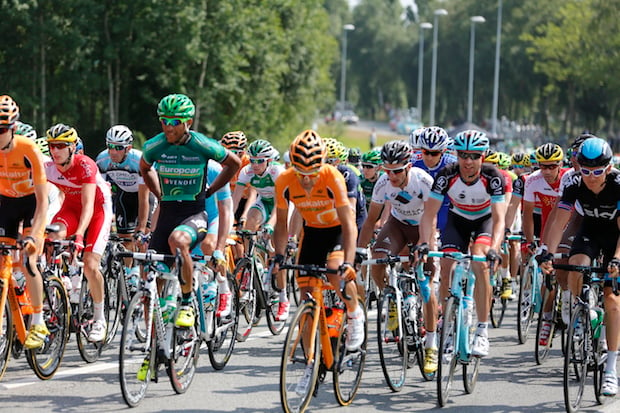 We have another location/situation to add to society’s collective “places/times I shouldn’t take a selfie” list (there’s one of those right?): in the middle of the road as hundreds of Tour de France cyclists barrel down towards you.

This might seem like common sense, but hard as it might be to believe, Tour de France cyclists are complaining that fans standing in the middle of the road to take a selfie as the group approaches are “the new pain in the arse” for riders this year.

That quote comes from The Team Sky rider Geraint Thomas, who spoke to The Guardian and was joined by American Tejay van Garderen in publicly criticizing the dangerous trend. For our money, we prefer Garderen’s description better though. He called the trend “a dangerous mix of vanity and stupidity” and took to Twitter to ask fans to #think:

Standing I the middle of the road with you back turned while 200 cyclists come at you, just to take a selfie. #think #TDF2014

That being said, I love the crowds and thank you for your support. But please give us room. Gonna ice my knee now.

Of course, all of the riders love the support — some were downright shocked at the sheer number of spectators in the Yorkshire leg of the Tour — just as long as those people stay… you know… out of the road.

Image credits: Photograph by Pymouss and used in accordance with Creative Commons licensing.

Video: Photographer Documents the Crazy Adventure of Surfing in the Arctic Circle

Four Years Later: Browse Through the First Photos Ever Posted to Instagram