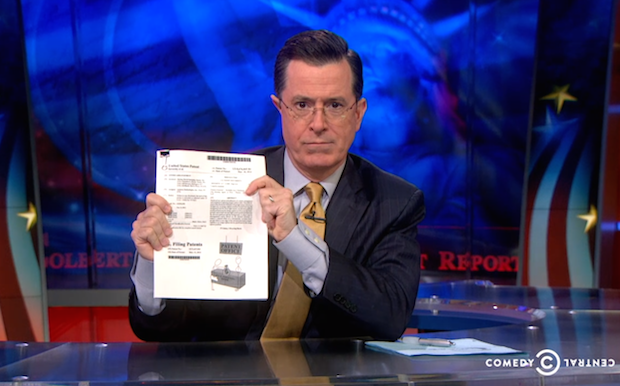 Last week, we reported on the news that Amazon had actually patented the age-old practice of photographing things against a white background. This led to much ridicule from the photography community, but one of the big guys just got in on the well-deserved roast, and his name is Stephen Colbert.

Colbert — who, if you’re somehow unfamiliar, got his big break on The Daily Show, now hosts his own parody news show called The Colbert Report, and is set to succeed David Letterman as the host of CBS’s Late Show — went after Amazon in this four-minute segment from his May 14th episode:

The segment does a great job of highlighting the ridiculous culture of patents — “so if you have an idea, and you work hard, someday you too can get sued by someone who had a similar idea” — before diving right into how Amazon’s wordy description of a common practice is, not “bull s***,” but rather “male bovine fecal matter extruded on a longitudinal axis.”

Don’t worry though, Amazon’s gonna get what’s coming to them because Colbert filed a patent that goes even one step further than patenting a technique everyone uses always… he patented patenting things. Check out the video to see it all for yourself and we hope this helps start off your Friday on a fun note.