Dean J. Tatooles specializes in fine art panoramic landscape photography, wildlife photography, and indigenous portraiture from remote locations around the world. He also works with top-rated travel companies and fellow professional photographers to lead photographic safaris in Iceland, India, Kenya, and more. Fresh off a trip in Iceland, Tatooles and colleague Tim Vollmer answer some common questions about the eerie natural anomaly known as the Aurora Borealis. If shooting the Northern Lights is on your photographic bucket list, be sure to check out their tips below, which have been gathered from years of experience.

What are the Northern Lights

At some point in our lives, each of us has either heard stories about or seen images of dancing lights in the far north of our planet. Undoubtedly, this spectacle is beautiful but what exactly are the “Northern Lights” and where do they come from? The “Northern Lights”, or Aurora Borealis, are a series of discharged particles (or solar wind) emanating from our sun that penetrate Earth’s magnetic shield and create light when combined with atoms and molecules (such as nitrogen and oxygen) when entering our atmosphere. 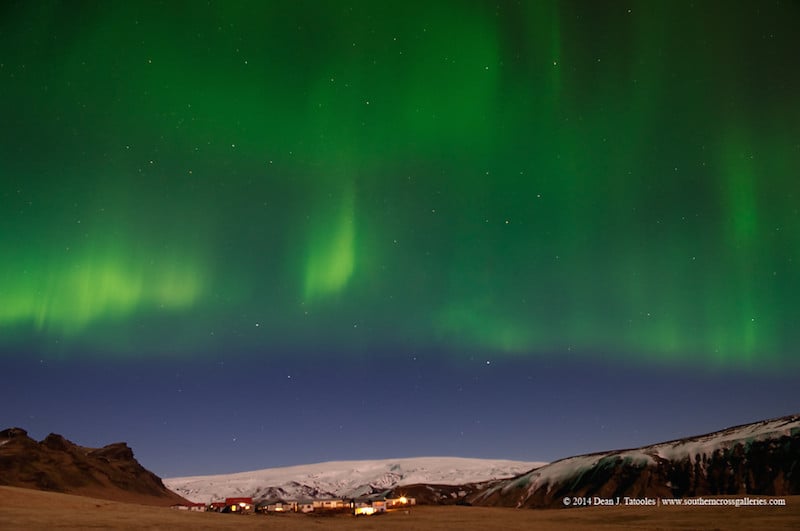 How far do these particles travel before colliding with Earth?

The discharged particles travel over 150 million kilometers, or about 90 million miles, through space toward Earth before being drawn in to the Polar Regions by our planet’s magnetic force. Amazingly, solar wind only takes about 2 to 3 days to travel this staggering distance.

Are they harmful to us or our planet?

No, solar wind collisions with Earth’s magnetic field occurs in the upper atmosphere and the charged particles and do not come close to humans. At best, a high dose of solar wind may disturb radio communications, induce voltage surges in power lines, or create a minor overload in orbiting satellites. 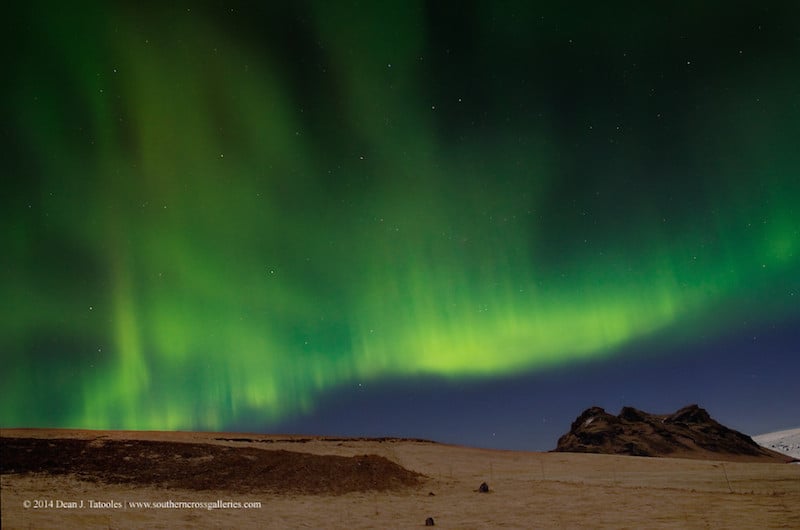 What colors are found as part of the Northern Lights?

The short answer: it depends on what types of gasses the discharged particles collide with. Collisions with oxygen typically produce green and yellow lights while contact with nitrogen results in reds, violets, and blues.

What kinds of shapes can the Northern Lights take on?

Light shapes can be both static and dynamic in the night sky. During periods of minimal solar flares, shapes are less prominent and do not vary in definition or color. On the other hand, during periods of strong flares, the Northern Lights swirl, dance, and even race in column formations sporadically throughout the night sky.

Where and when should one see the Northern Lights?

The best place to view the lights firsthand is to visit a location in latitudes in the Arctic Circle from 68 degrees to 74 degrees. The best time of year to travel to see the lights is in the winter months due to low light pollution and clear atmospheric conditions.

What are my chances of seeing the Northern Lights?

During autumn and winter months north of the Arctic Circle chances are very good, especially when periods of high pressure are present. Avoiding urban areas and coordinating your viewing during new moon cycles can improve your chances as well. What kind of gear should one take to photograph the Northern Lights?

First and foremost, you must use a tripod and cable release to capture the Aurora properly. Gear you should bring along is fairly straight forward. We recommend a Nikon 14-24mm f/2.8G AF-S ED, or similar for Canon users. A fixed focal length lens like a 24mm Rokinon 24mm f/1.4 ED AS UMC Wide-Angle Lens (also in Canon mount) was also a nice addition on our recent Iceland winter photo workshop. Longer lenses, such as a Nikon 70-200mm f/2.8 VR II, or similar for Canon, may come in handy for tighter compositions. Remember to take all filters off the lenses prior to shooting, including a UV filter, or you will end up with an undesirable aberration on all your images.

What kind of settings should one use to capture the Northern Lights?

There is no perfect recipe for capturing the northern lights because, as in any situation, your exposure will largely depend on the light. However, that being said, try setting you camera on full manual mode. Use the Live View setting on your camera’s display to ensure you get a sharp focus at infinity (or slightly less, depending on the lens). Set your ISO between 800 and 3200, your aperture between f/2.8 and f/5.6, and your shutter speed at between 15 seconds and 30 seconds. Note that shutter speeds of above 15 seconds will result in slight star movement. You’re ready. Lock you mirror up, compose, and shoot. If you end up with a slightly overexposed or underexposed image, play with a combinations of these settings until you get the exposure to where you want it. 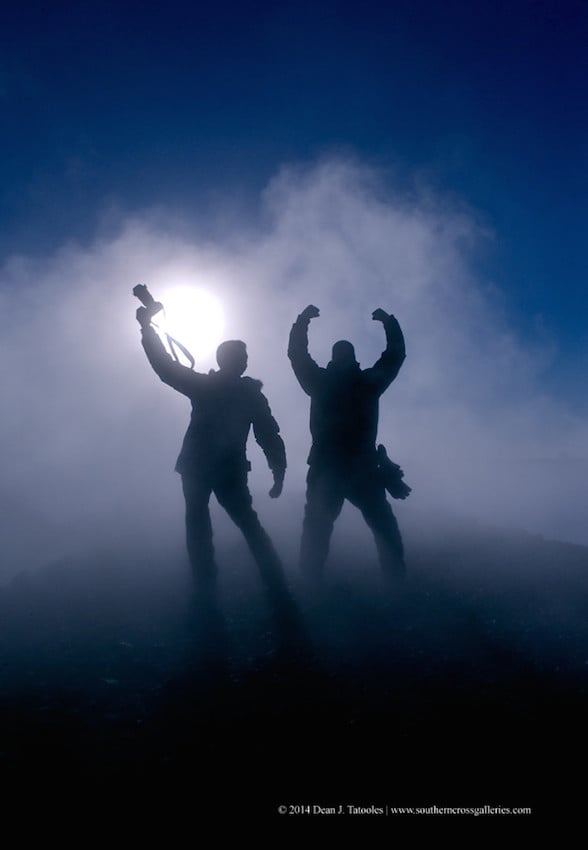 How does one protect their gear in such cold conditions?

It goes without saying that the proper care, treatment, and safe storage of your camera gear is essential in protecting it from the elements and while traveling. However, an added concern a photographer has in maintaining camera gear in operational condition in extreme cold weather is a result of a sudden change in temperature. You can avoid any issues by gradually acclimating your camera gear to the temperature change slowly and to keep your gear at the same temperature while shooting. Try to avoid taking your camera in and out of your warm bag or vehicle during a cold shooting session. This may result in condensation inside the lens, which is usually harmless to the equipment, but annoying and problematic when trying to capture images. If this happens to you, place the lens near (and not on) a heating source like a vent inside your room. It will act like a car defroster and fix the problem in short order. 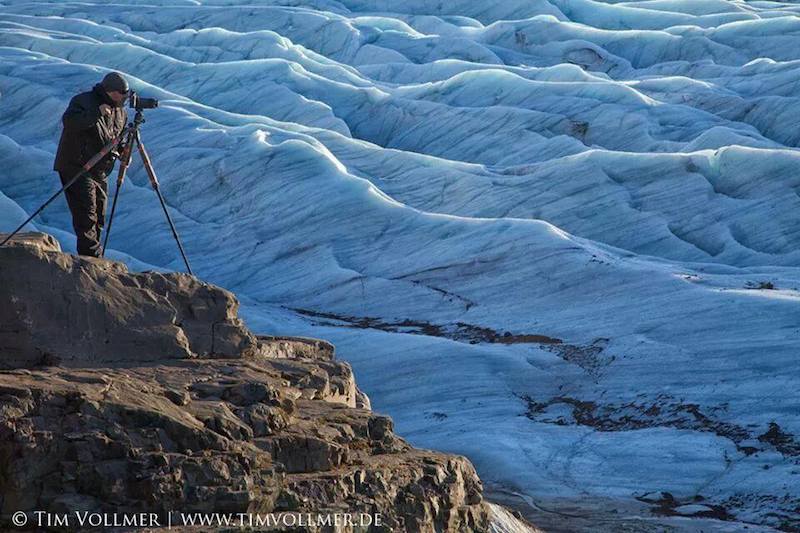 If only 1 lens could be taken to shoot the Northern Lights, which lens should it be and why?

If you could only take one lens to shoot the Northern Lights we would recommend taking a Nikon 14-24mm f/2.8G AF-S ED, or similar for Canon users. You want a fast, wide angle lens. This lens will provide you with the ability to incorporate enough of the dark night sky in your image for contrast and scale.

What are some problems a photographer might encounter when trying to shoot the Northern Lights?

Besides clouds, unwanted ambient light can really affect your images. Avoid man-made light sources and highly populated areas, such as cities, if at all possible. Find a nice, dark field with a nice foreground, such as large pine trees, for your shoot or try some light painting, as we did in the image below. We came across an old WWII airplane in the West Fjords in Iceland. 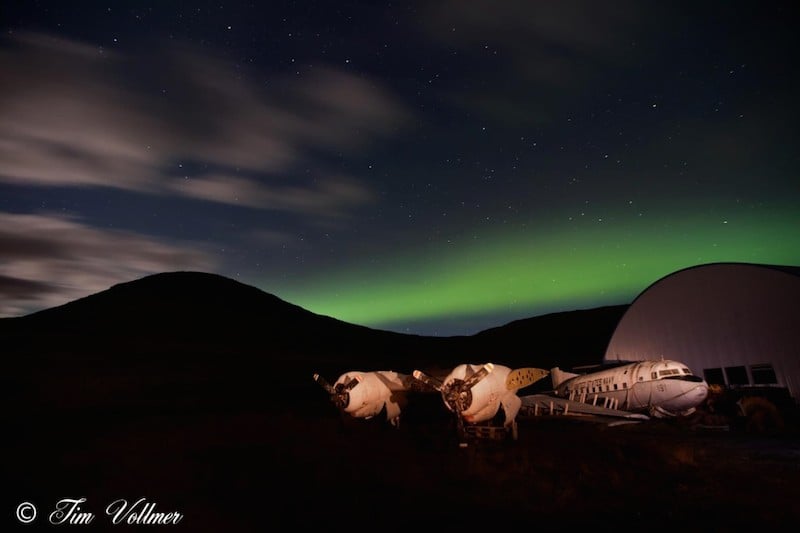 What is the biggest mistake a photographer could make when embarking on a trip to see the Northern Lights?

Not bringing a sturdy tripod or shutter release mechanism. Leave some clothes at home if you have to!

Do the Northern Lights appear consistently or is there a chance that a photographer only has 1 opportunity to capture them?

The Aurora is sporadic and completely dependent on the frequency and strength of solar flares that come in contact with Earth. That and taking the high probability of cloud cover in the winter months, a photographer has to be ready every night and assume that his/her first encounter with the Aurora may be his/her last of a trip. While in Iceland, a good website to monitor is the Icelandic Met Office Weather Forecast. This site will show you the strength of the solar activity and cloud cover in real time. It is very handy!

About the authors: A big thank you to both Dean J. Tatooles and Tim Vollmer for putting this very informative and helpful piece together, and letting us republish it here. Sign up for one of their photo safaris, which take place in Iceland, Western Canada, East Africa, Nepal, and more. This article originally appeared on the BorrowLenses blog.

Samyang is Teasing Us Yet Again, Will it Be AF Lenses This Time?