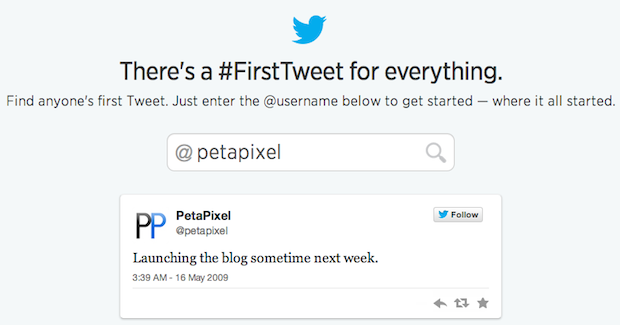 In celebration of their 8th anniversary, Twitter has launched a tool that lets you look up the first tweet of any and every account on their service (that isn’t protected). We thought we’d put that tool to some photographic use and share what some of the biggest photography names on Twitter were sharing when they first hopped on the now-huge microblogging platform.

Damon's bio and a portfolio of his work for the Times: http://tinyurl.com/cxl5bc

View the winners of the Reuters 2008 Journalist of the Year awards http://tinyurl.com/dk8uel

If you're in London, please join me at the opening of my show at Chris Beetles Fine Photographs Gallery opening tomorrow, January 15.

This is going up on facebook. Me and suzie http://yfrog.com/5j1gbj

First things first… Hmmm… What to use for avatar…

Wrapping up Day 1 of the Creative Sessions. Note to self: don't forget to turn off the microphone during breaks.

Working at the new studio.

uh oh… entering the twittersphere… took me awhile – but here goes… rodney and joseph – you're to blame!

is coworking in a Starbucks. Which is about an 11 on a scale of 1 to 10 on the clichémeter…

Got something to say about your day? Upload your 140 seconds for a chance at 100k – www.nikonfestival.com #NikonFestival

Welcome to the #Canon Corporate Twitter handle! Stay tuned for the latest on Canon events, news and much more!

Olympus Imaging America Inc. is now officially on Twitter. Perhaps a picture is worth a thousand tweets?

Hello #photo world! Sigma Photo has officially joined the Twitterverse. Check out the latest on the DP2's availability! http://ow.ly/8lLW

We tried to be as extensive as we could, but it’s a near certainty that some important names slipped our minds. If you feel someone or some other company or brand should be included that wasn’t, drop us a line in the comments and we’ll add them to the list!

You can find out more about the tool on Twitter’s blog, or try it out for yourself by clicking here.