There’s nothing like a Hubble Space Telescope image to break up all of the law and stock photography-related news (and there has been a LOT in the last 24 hours). Then again, this video and image aren’t the most peaceful NASA has ever released, given they show a galaxy tearing itself apart as it hurtles through a particularly harsh part of our universe.

The video above is what initially caught our eye: a beautiful milky way shot by Hubble that you are slowly zoomed into until you arrive at the spiral galaxy ESO 137-001. “A dandelion caught in a breeze” is how NASA describes it, and it is an ironically peaceful description for a terribly violent event.

Here’s a look at the final photo you’re zooming in to (high res here): 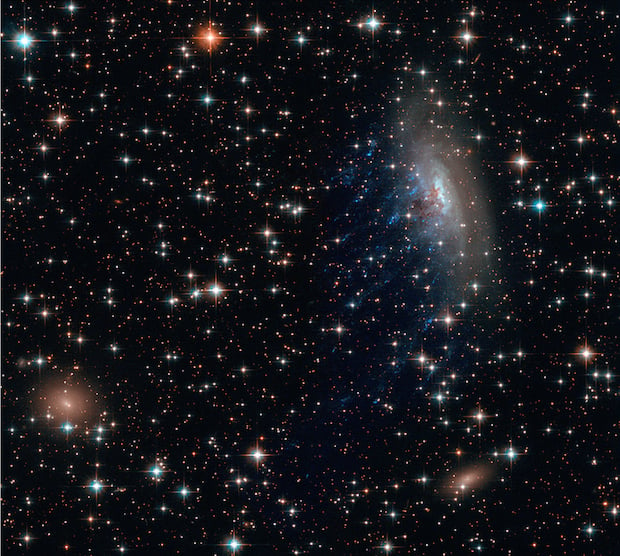 The road is harsh: intergalactic gas in the Norma cluster is sparse, but so hot at 180 million degrees Fahrenheit that it glows in X-rays.

The spiral plows through the seething intra-cluster gas so rapidly — at nearly 4.5 million miles per hour — that much of its own gas is caught and torn away. Astronomers call this “ram pressure stripping.” The galaxy’s stars remain intact due to the binding force of their gravity.

Tattered threads of gas, the blue jellyfish-tendrils trailing ESO 137-001 in the image, illustrate the process.

And the dandelion analogy goes further than providing a picture. Much like a dandelion lets its seeds go in the breeze, so the galaxy is leaving behind star-forming material. The downside is that, when it’s all over, it will have too little left for itself.

To learn more about the image, or if you’d like to take a higher resolution look, head over to the NASA Goddard website here.