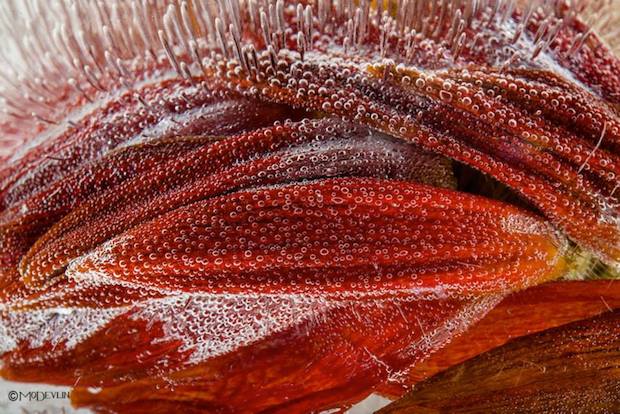 When you hear the term flower photography, it probably doesn’t inspire a particularly powerful reaction. There are plenty of gorgeous images of flowers — from wildflower fields to beautifully-lit bouquets — and so the genre isn’t somewhere we usually look for inspiration.

That is, until we ran across photographer Mo Devlin‘s stunning shots of frozen flowers.

Devlin isn’t primarily known for these shots. In fact, if you Google him, you’ll immediately come up with some beautiful photos of fish (that are well-worth taking a look at, by the way). For some reason, however, it was the frozen flowers that captivated our imagination. 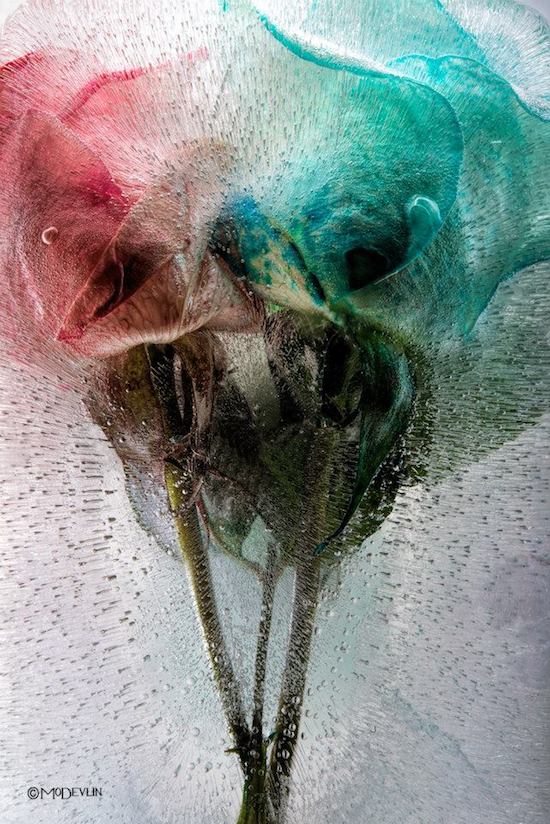 He’s photographed everything from posies, to daffodils, to roses; all frozen in blocks of ice. We’re not sure why, but the ice just adds a certain something to the photos that draws you in. We caught up with Mo to ask about the project, and he was kind enough to answer a few questions about this work:

PetaPixel: What inspired you to embark on this project in the first place?

Mo Devlin: I’ve always enjoyed photographing flowers. The idea that has now developed into an ongoing project actually started when I tried to freeze an old Seiko watch. At the time I also froze a single rose in my wife’s flower vase. The vase froze and broke, leaving me with more or less a column of ice with the rose frozen inside… and an upset wife. I took some photos of the flower and liked the way they looked.

PP: What kind of challenges have you faced trying to capture these images?

MD: The problem that I had was that the ice that encased the rose was for the most part, cloudy with clear edges. I did some research and found that ordinary tap water, when frozen, captures all the minerals and impurities and clouds the ice. I tried boiling the water, but had mixed results. I ended up using distilled water and had some of my best results. I continue to tweak the aquatic formula to improve clarity.

Clarity comes not only from the liquid, but also the shape and size of the container. I started calling the frozen creations “flower pucks” primarily because the majority of my initial attempts were done in small Pyrex custard bowls. Over the past year I have frozen blooms in containers as small as an ice cube and as large as a one gallon plastic container. Each freezes differently. 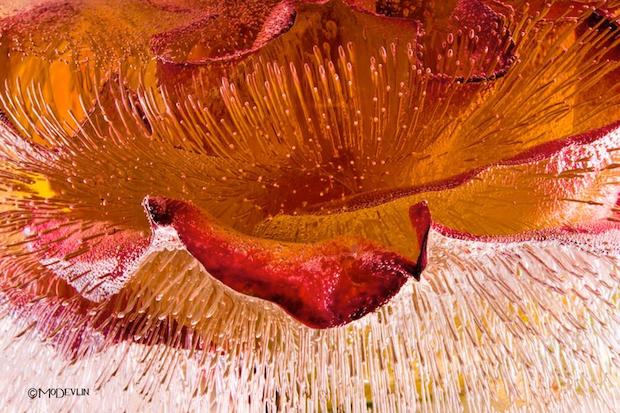 PP: Have you run into any surprises along the way?

MD: One of the things that was most interesting to me was the various frozen bubble trails that escaped from the flower. I noticed that sometimes the trails were longer. Curious, I did some research to try and determine exactly why this was occurring.

The answer was in the science of freezing. Water freezes at 32 degrees. As it gets colder the molecules in the water slow down and become denser. At 39 degrees it is actually denser than the ice it will form when solid. This contraction basically compresses the object in the water — in this case, the flower — squeezing out oxygen. As the water gets colder, approaching the freezing point, it begins to expand. As it expands it slowly “stretches” out the bubbles to form those beautiful trails.

PP: Can you describe what exactly we’re looking at in these images?

MD: Many of the photos are macro close-ups of sections of the flower puck. Some of the images are of clusters of flowers. Other of flowers that I have taken the time to dye by putting the cut stem in a container of colored dye. And still others were of plants that were close to near dead, frozen to capture one more gasp of the beauty of the flower as it decayed.

With all of my photos I strive to maximize the color and composition. I think I like the experimentation as much as I do taking the photos. I know that I have become somewhat obsessed with my frozen posies because when I bring flowers home, my wife asks, “Are those for me or the freezer?” 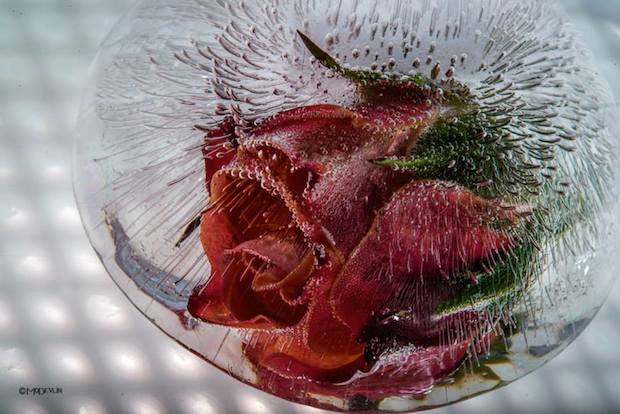 PP: What sort of gear do you use to capture the photos?

MD: For all of the shots I used a Nikon D800E with 60mm VR Nikkor lens. Most often I utilize a polarizing filter. The puck, for the most part, is suspended over my stainless kitchen sink (a perfect reflector) and lit from below with one or two Nikon SB-910 flash units. The light is diffused with a Gary Fong light sphere and directed either up or at an angle through the bottom. A piece of opaque Plexiglas holds the puck. I use two or three Nikon SB-200 kicker speed lights alongside or above the puck.

The nice part about all of the light is that I am able to shoot at a very low ISO (25), shutter speed (1/320th) and a very high aperture (f/30 – f/40). All of the photos are hand-held. I manually focus where I want to set my composition and make slight adjustments in my position to bring the area into focus. I do adjust the aperture slightly as indicated, but never change the ISO or shutter speed.

Here’s a look at some of the photos in Devlin’s Frozen Posies series, which you can see in full over on Zenfolio: 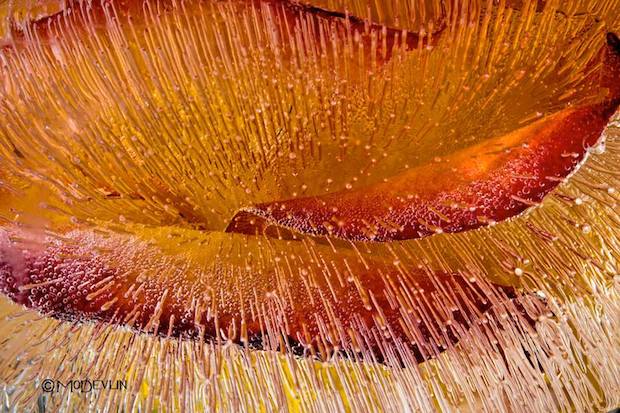 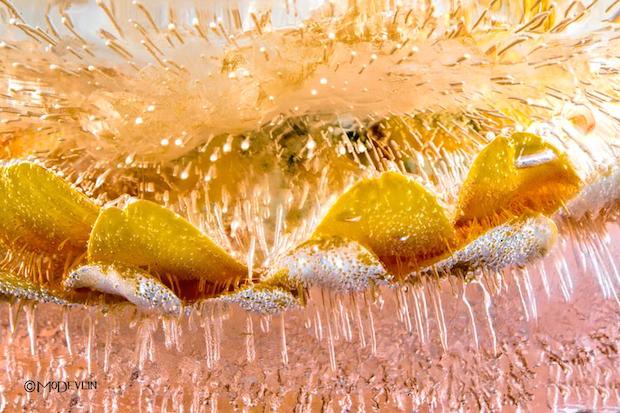 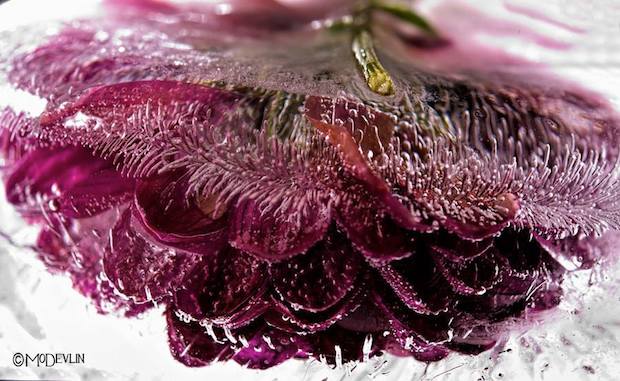 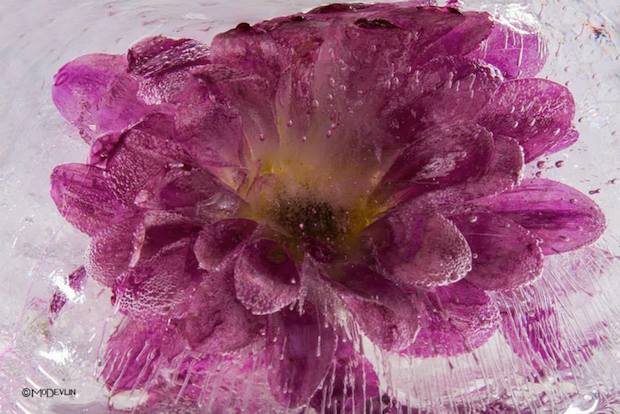 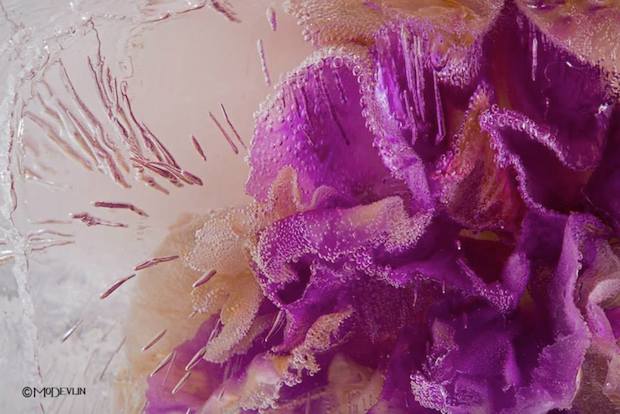 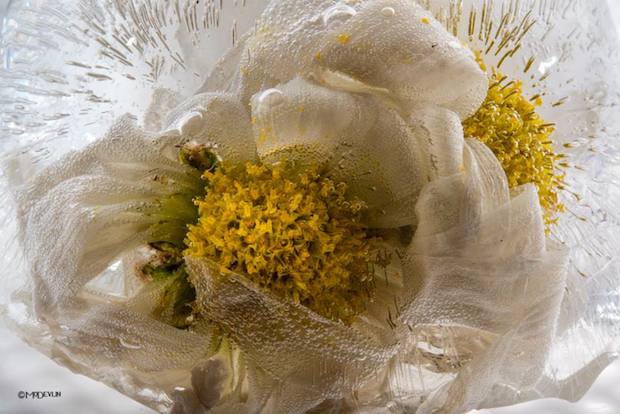 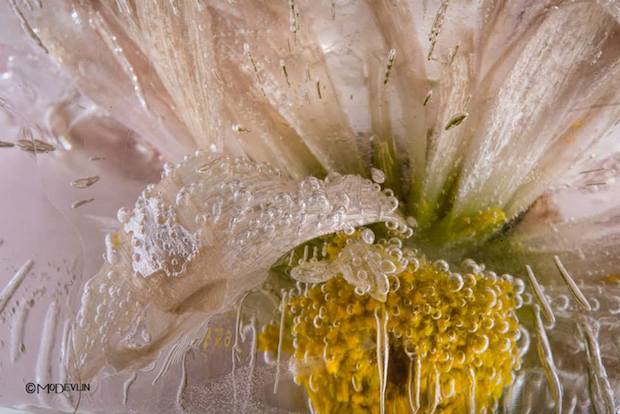 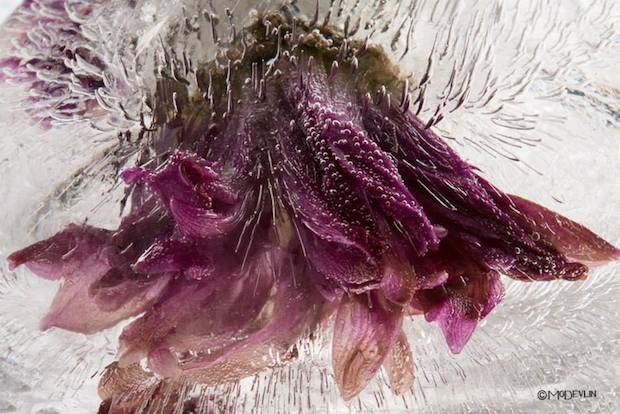 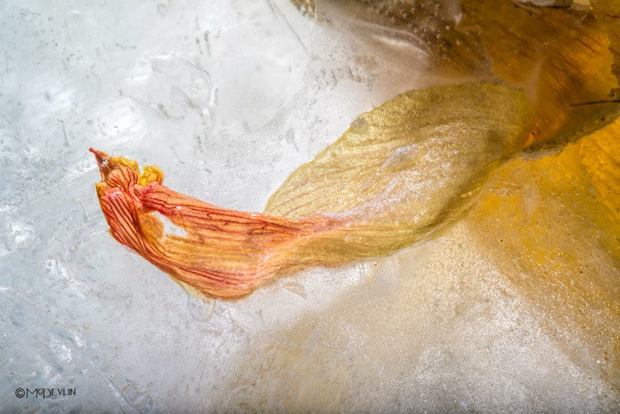 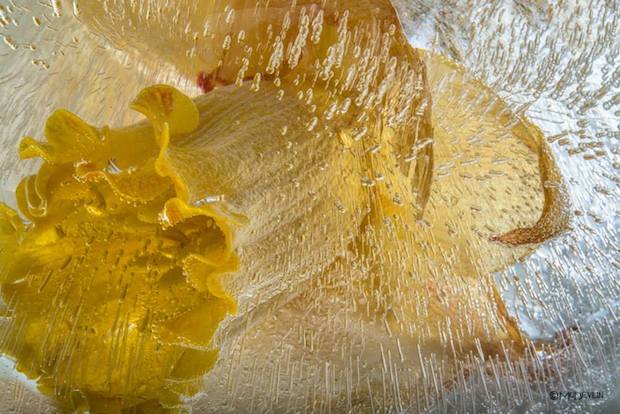 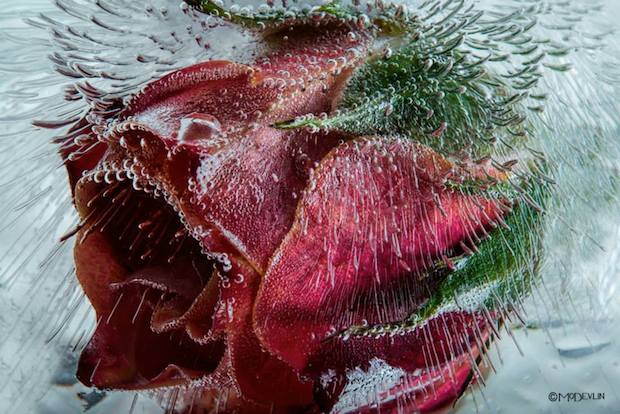 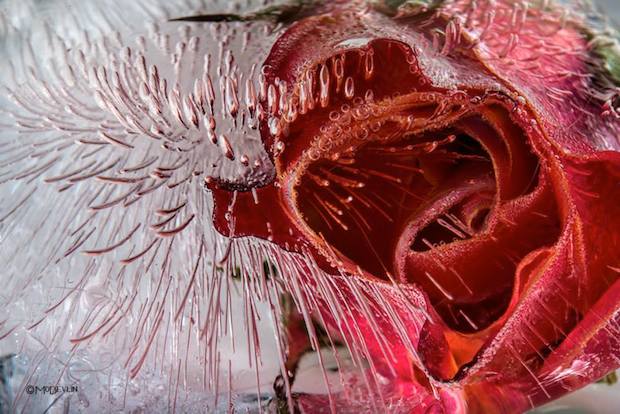 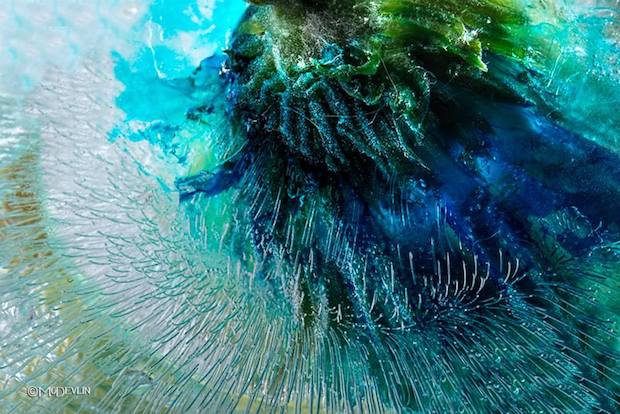 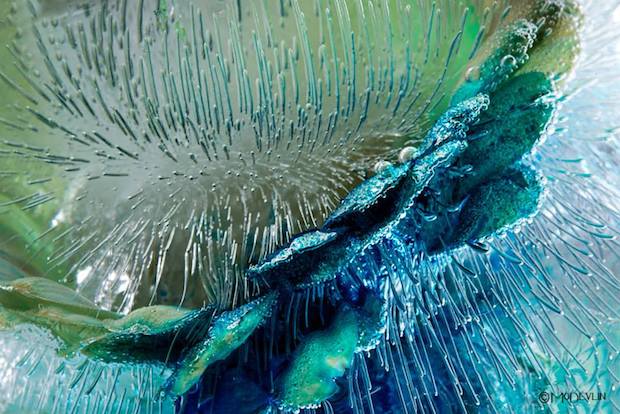 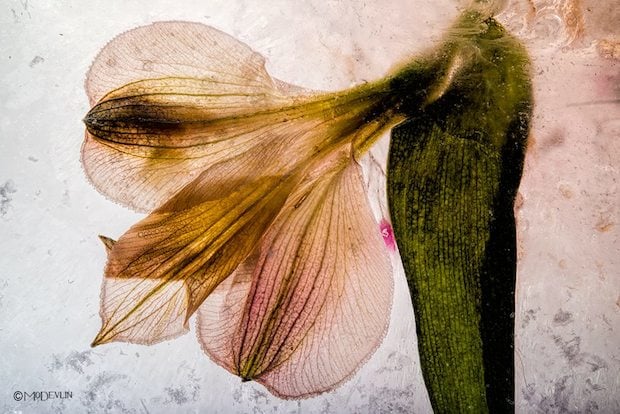 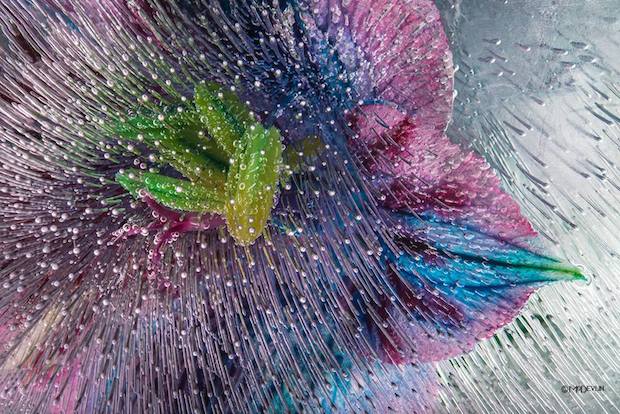 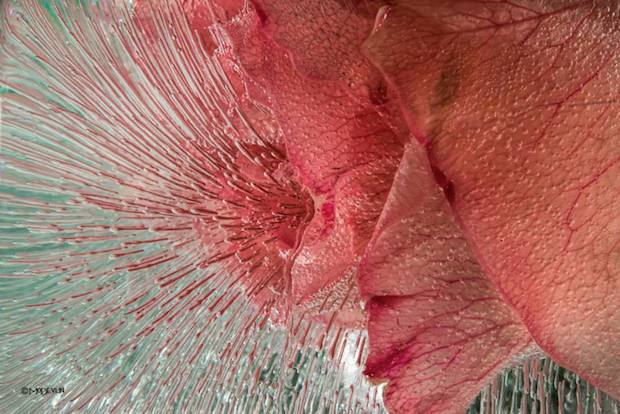 A bit thank you to Mo for answering our questions and creating something awesome. To see more of his work or follow him as he continues to experiment with frozen flowers and other interesting photography ideas, head over to his website or follow him on Facebook and Twitter.

Image credits: Photographs by Mo Devlin and used with permission

Thanks for sending in the tip, Vaibhav!

BTS: What It’s Like Being on DigitalRev’s Cheap Camera Challenge