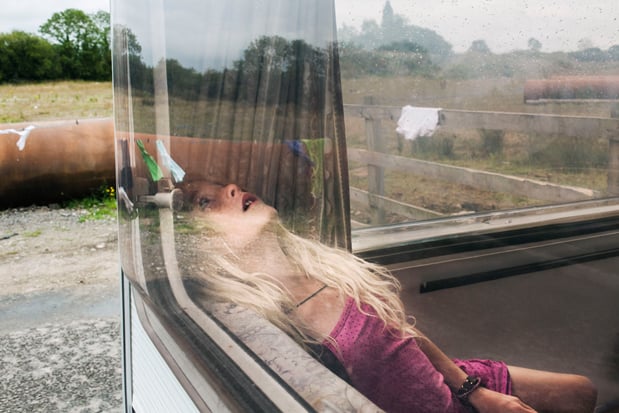 Birte Kaufmann was born in 1981. She lives and works in Berlin, Germany. She is a visual storyteller focusing on social and society relevant issues. Her work has earned her several Awards and Grants, and has been exhibited worldwide.

PetaPixel: To begin Birte, tell us about what brought you into a career of photography?

Birte Kaufman: I have always been fascinated by the way photography can reveal moments in life. It was the area of photojournalism that interested me the most and I became influenced by works such as those from the early magnum photographers (as well as minimally conceptual documentary work).

Initially I wasn’t sure if I wanted to make photography my profession, and I opted to first study social work with a focus on media pedagogics. My studies did, however, involve the subject of photography and it was here that my professor Dr. Wiedemann encouraged me to explore photography deeper.

With the his help and mentor-ship, after graduation I decided to continue down the path of photography. In 2009 I made the move to Berlin in order to further my studies in photography at Ostkreuzschule. 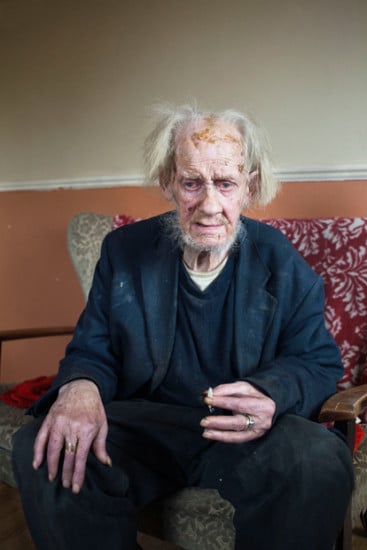 PP: Who were the important teachers and mentors in your life? How have they helped to shape your vision of the world?

At the Oskreuzschule, which is a small school, the exchange with some fellow students helped to inform my work. Every single teacher I have had during my studies has influenced in different ways my view on photography and art in general. My main photography teachers at Ostkreuzschule included Werner Mahler, Ludwig Rauch, Thomas Sandberg and Jonas Maron. 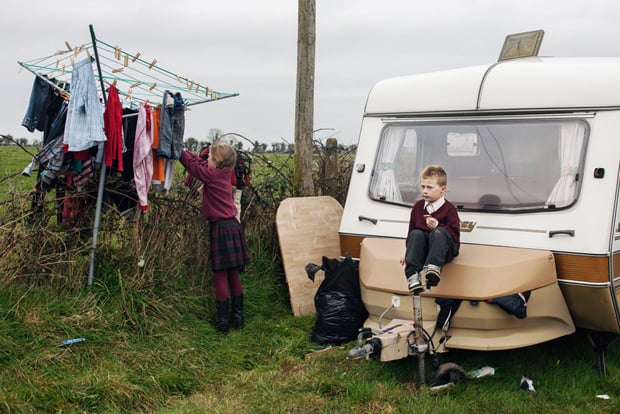 BK: The Travellers are Ireland’s biggest minority group, with a size of between 20,000 to 30,000 in population. This group has a nomadic origin, stemming from the tradition of migrant workers.

As this tradition no longer exists, The Travellers are looking for a new identity within the Western European society of the 21st century. Their origin still isn’t clear and they speak their own language called Gammon. To this day, some of the Traveller families live by the roadside illegally — mostly without electricity, running water or sanitation — even though the government has provided halting sites for them where they are able to stay with their caravans. 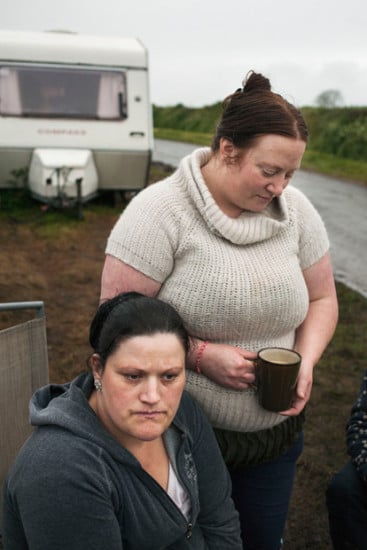 PP: What made you want to tell their story?

BK: Even though I had traveled to Ireland many times over the years, it wasn’t until 2010 that I actually first came into contact with them. The image of a Traveller camp beside the road never left my mind. The more I asked about them and researched the more I was confronted with prejudice against them. Everyone in Ireland told me that I would never be welcomed inside their community, but the more I learnt about them the more I wanted to know. I wanted to meet these people for myself and explore their daily life through my camera.

PP: In your statement for this work, you say that these are people who live in a parallel world, and that they live by their own rules. What are the rules they live by?

BK: They live by very old-fashioned rules and with very traditional gender roles. They usually marry at a young age and only to another member within the Traveller community, and for this union they also require the permission of their parents. They often have large families with many children. In the past one married couple was known to have as many as twenty children, and today the younger generation still have up to ten or more children. Also, traditions like hunting exist till today and the catholic religion mixed with their own fairy beliefs. 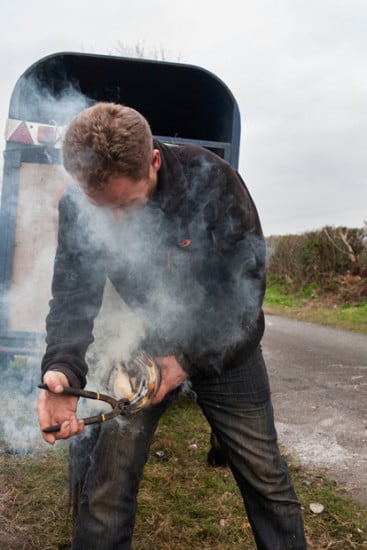 PP: Just what is it about this community that’s so different from the majority of the Irish population? Is something preventing them from entering into the larger community, or do they separate themselves intentionally?

BK: I think it’s a bit of both. Constant confrontation with such great prejudice over the years has forced the Travellers on to the outer and they have separated themselves more and more. Their low rate of literacy is another aspect as well as the fact that they would have to give up their way of life in order to enter into the mainstream society.

A lot of their traditions and habits are not understood by modern western society. I think it`s the same problems that all original nomadic groups struggle with. 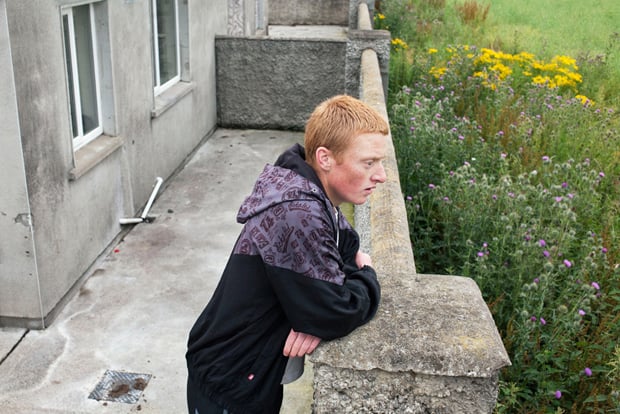 PP: You mentioned in your statement that you had for a time lived with one of the families you photographed. Can you tell us about that experience?

BK: I have been living with them on and off since the summer of 2011 and will continue to for at least the next year in order to bring this project to its conclusion. I have stayed with them on the roadside, shared their campfires and also lived on halting sites from time to time. It is a very hard life that they lead, especially with the Irish weather conditions. Boredom from a young age also plays a big role in their daily life.

When they started to teach me their language I really learned a lot about them and their habits. The structure of the Gammon language explains a lot about their social structure; however, as close as I have managed to get to their community, it is still difficult for me to have a clear insight into the male traditions.

I have often heard the sentence “Birte the women are over there! Go there!” I do feel that I am slowly making some headway though. For the past 3 years I have gone to one of their annual horse fairs, and on the most recent occasion the men of families that I was staying with spoke with me in public for the first time.

When other traveller men asked why they were talking to me, they answered. “She is a friend.” That meant a lot to me and showed that the longer I continue to come back the more access I will have in the community. 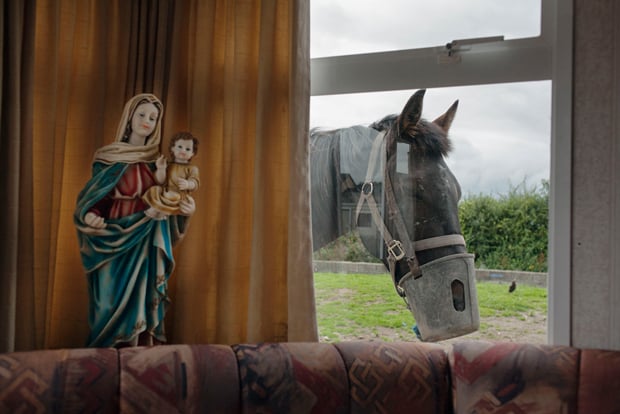 PP: Was it difficult to earn the trust of this family?

BK: It took me a very long time. I was coming back and forth to their camp everyday for three weeks, before I had the chance to stay over night with my VW-camper for the first time. Since then my continuous visits to Ireland have assured them that I have a genuine interest in their lives. I have a very good relationship with them now, but there are still always situations that come up when I least expect it, which show me that I am not part of their community.

PP: How has this project shaped your idea of the role you play in the photographic field? How do you define yourself?

BK: I think I am somewhere in between. It’s not really a photojournalistic work and not totally documentary, because it’s to much about my own vision for the project as well. I would say I work more on photographic essays using elements of reportage and documentary photography. I have learned this during the course of this project. One good image has more importance for me than the journalistic story. So I would say I am more of a visual storyteller. 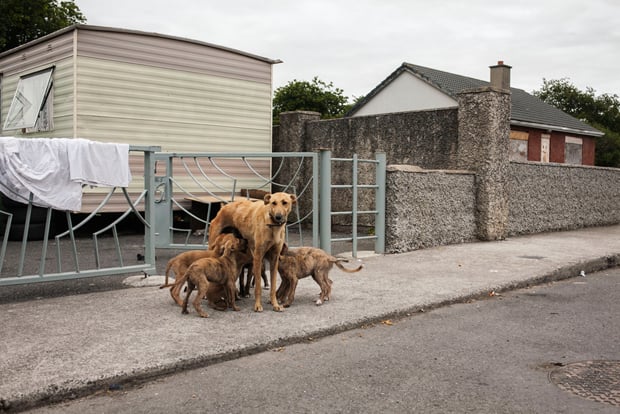 PP: What’s the most important thing you’ve taken away from this project, and what do you want your viewers to take away from it?

BK: If you have a vision and a genuine ongoing interest in a subject then it doesn’t matter how impossible it may initially seem, you can do it regardless of what other people will tell you.

What is really import for me in this project and also in general is photography that shows the individual as human and never break my own ethical rules in regards to exploitation by taking photographs. If people look at my work they should see the very human side of the Travellers not some stereotype. For me it was really important to focus on their daily life and the situations I experienced there and not the spectacular events, which happen once a year or even only every second year. 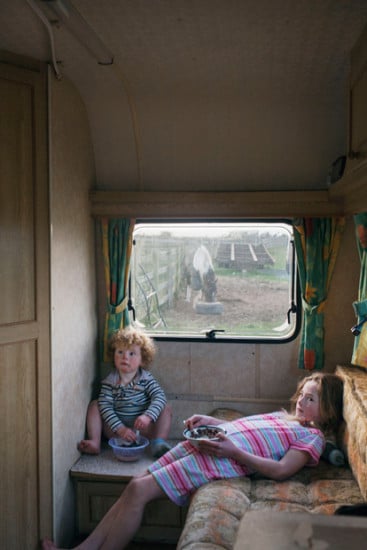 PP: Thank you for your time Birte, any parting thoughts?

BK: Thank you Greg. This work will be shown in Hamburg, Germany with the gute aussichten — young german photography exhibition from the 6th of February at Deichtorhallen.