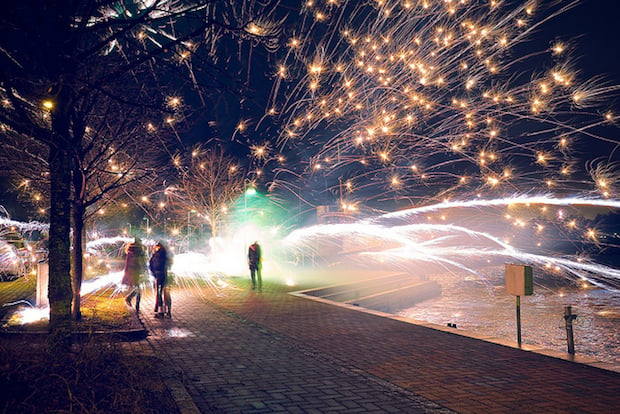 Sometimes a great photograph takes months of planning and patience to capture. Other times, you simply have to be in the right place at the right time, with your camera in tow and enough expertise to properly frame and capture an amazing moment. The photo above falls into the second category.

Captured by photographer Kimmo Kulovesi, the photo is simply titled “Explosive New Year 2014,” and it’s a breathtaking example of accidental photography gone so very right. Speaking with My Modern Met, he explained how this photo came to be:

The firework shot was taken just after midnight in Herttoniemi, Helsinki, Finland. The scene is actually very close to where I live, since I only popped out for half an hour around midnight on New Year’s due to bad weather, as one Flickr commenter pointed out, you can even see how windy it is by looking at the light trails in the photo…

What you see is basically a firework’s misfire where it blew up on the ground instead of taking off into the sky. (No one was injured, and it might even have been a deliberate prank by the young men firing it — it happened twice during the 15 minutes I was there.)

The photo was taken on his Fuji X-Pro1 with an XF 23mm f/1.4R lens attached. EXIF data reads as follows: 2 sec exposure (which, he tells My Modern Met, he had pre-set to get regular firework shots) at f/4 aperture and ISO of 640.

To see the final shot in glorious high-resolution, head over to Kulovesi’s Flickr account. And if you would like to see more of his work, be sure to visit his website by clicking here.

Image credits: Photograph by Kimmo Kulovesi and used with permission.