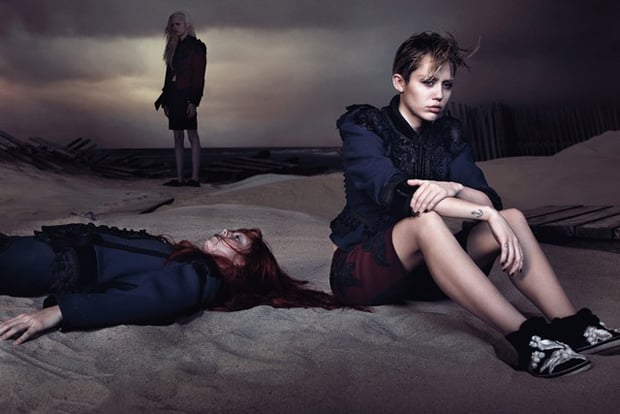 Take that, girl! Celebrity mess Miley Cyrus is at the butt end of an insider fashion industry snub after noted fashion photographer Juergen Teller refused to work with her on a campaign for longtime client Marc Jacobs.

Jacobs explained to Women Wear Daily: “I have worked with Juergen for years and love him as an artist… He just didn’t want to shoot her.”

That’s it by way of explanation, so feel free to supply your own theories. Maybe guilt-by-association paranoia regarding Terry Richardson? Crotchaphobia? Tabloid fodder fatigue? Whatever the case, when Juergen gave Jacobs the “her or me” ultimatum, he chose her.

Teller has been a noted fashion shooter since the late 1990s, with spreads in Vogue, W, Details and more; plus exhibits at the likes of New York’s Museum of Modern Art and the Venice Bienniale. Celebrity subjects he has deemed worth his time include Bjork, Winona Ryder, Michael Stype and William Eggleston.

The Marc Jacobs campaign was instead shot by British lensman David Sims, who created moody, goth-inspired scenes that may be more effective at selling antidepressants than designer clothes.

(via WWD via New York)