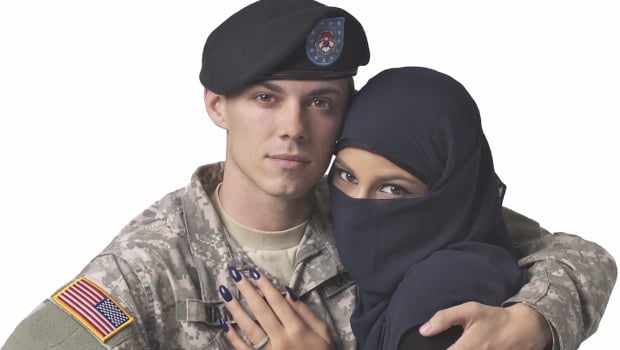 Media giant Clear Channel recently stirred up some controversy when it decided to flat out reject an advertising image of an American soldier embracing a veiled Muslim woman from its Times Square billboards due to its ‘uncomfortable’ nature.

The photo is part of an advertising campaign for SnoreStop, a line of over-the-counter snoring remedies. The company has already placed the image on a billboard in Los Angeles, with the pitch: “If we can keep this couple together, we can keep anyone together.”

Here’s a behind the scenes look at the photo shoot for the disputed billboard:

Clear Channel executives rejected the ad for its Times Square billboards, however, citing it “sensitive nature” and “uncomfortable imagery.”

Which is sort of the point, a SnoreStop marketing honcho told DNAinfo. “There is no nudity or bigotry or hostility in our #BeTogether campaign,” said chief branding officer Christian de Rivel. “In fact, we are specifically and aggressively promoting diversity, equality and harmony.”

A SnoreStop executive said the company is trying to place the ad with another agency with Times Square billboard space, but hasn’t gotten much response.

(via DNAinfo via RT.com)

The Arcanum: An Online ‘Hogwarts’ Where You Can Learn One-on-One from the Pros