Kevin Parry and Andrea Nesbitt of Candy Glass Productions have a thing for creating ‘spinning’ hyperlapses that make you feel like you’re flying around a landmark at super-speed. But while they’ve taken on landmarks like the CN tower and a few notable San Francisco locations before, they recently took their craft to the next level when they decided to ‘spin’ an entire mountain. (Note: Spinning mountain starts at 1:15 in the video above).

Creating one of these spinning hyperlapses around a landmark is a fairly straightforward idea, but it takes a lot of work. Imagine, then, how much more work it takes to do the same thing with an entire mountain — more specifically, Mount Hood in Oregon. Here’s what Nesbitt had to say about the project when we caught up with her:

Tackling a ‘spin’ around Mt Hood started as a crazy idea. We had done buildings in SF, and a mountain seemed like an impossible/possible extension of that — so we decided to try. Our motivation was really just to see if we could pull off such a crazy project. It’s one thing to spend an hour walking around a building, but a mountain would require months of planning, miles and miles of hiking, and some terrifying driving/exploring.

She also explained that, while the process of ‘spinning’ an object in hyperlapse is fairly straight-forward, it becomes infinitely more complicated when you’re working with a mountain. Fortunately, Mt. Hood had highways they could use to capture about half of the photos they needed, but capturing the rest involved miles worth of hiking and off-roading.

Here’s a map Nesbitt put together ahead of time that shows all the locations they wound up taking photographs from: 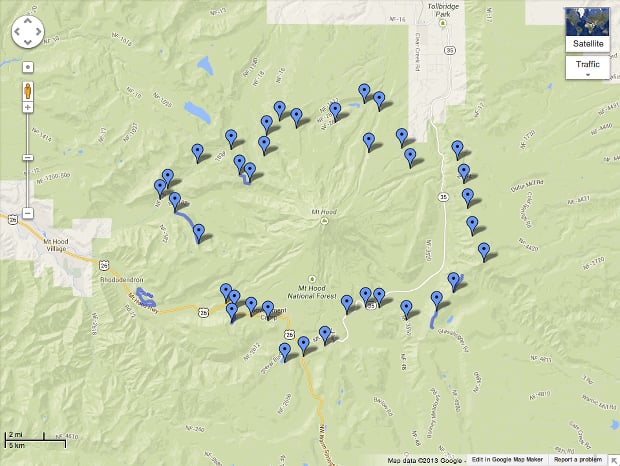 Usually they use Street View on Google to make sure that the landmark they’re ‘spinning’ is visible from every location they choose, but Google hasn’t yet mapped the trails around Mt. Hood. Fortunately, a site called Northwest Hiker gave them the photos they needed in lieu of Google’s all-seeing eye.

Gear-wise, Nesbitt told us they had to keep things very light — sometimes a single shot required 4-6 miles of hiking — so they made do with just a Canon 7D and maybe the occasional small tripod.

To learn more about the process, check out this tutorial video the duo put together last year while spinning the CN tower. And if you’d like to see more of what Candy Glass Productions does — their portfolio includes everything from commercials, to music videos, to short films and even wedding films — head over to their website by clicking here.