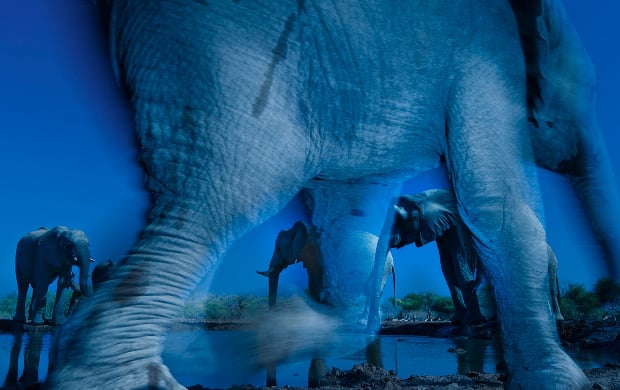 Each year, London’s Natural History Museum hands out awards for the Wildlife Photographer of the Year, and the winner of this year’s competition brought home top prize with an ethereal, beautiful and accidental photo of elephants at a watering hold in the Northern Tuli Game Reserve in Botswana.

The man behind the image is South African photographer Greg du Toit, who had to demonstrate an impressive level of patience, preparation and a little bit of luck to get the dream-like photo you see above.

Toit spent all night crouching in what’s called a “hide” — a sunken freight container that afforded him a ground-level view of the action — waiting for the elephants show up. They finally did shortly after dawn, which is when patience gave way to preparation and, ultimately, luck. 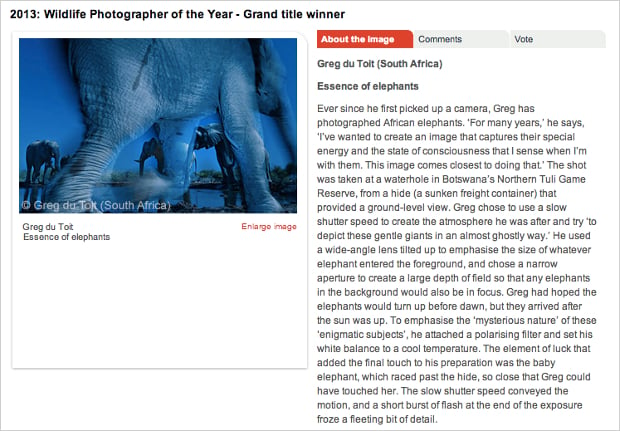 The preparation part has to do with knowing what it was he wanted to capture. On the Natural History Museum’s website, he explains that he wanted “to depict these gentle giants in an almost ghostly way,” and so he set a slow shutter speed and used a wide angle lens tilted up to convey the size of the creatures. He also attached a polarizing filter, and played around with the white balance until he had a “cool” look.

Finally, at the perfect moment, luck played its part too: a baby elephant ran by the hide, so close that Toit swears he could have touched her. “The slow shutter speed conveyed the motion,” writes the description, “and a short burst of flash at the end of the exposure froze a fleeting bit of detail.”

The final photo is an absolute beauty, and very deserving of the award it received. To learn more about Toit and his photo, or if you’d like to see other photographs that took home prizes in this year’s competition, head over to the Wildlife Photographer of the Year website by clicking here.