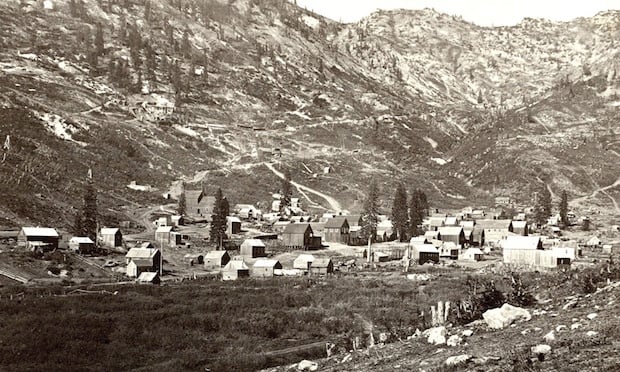 Photographer Timothy H. O’Sullivan is perhaps best known for his photos of the Civil War, which include his famous “Harvest of Death” photo. But after covering the war, O’Sullivan decided to strike out West, and when he came back, he brought with him some of the earliest photos of the (quite literally) “wild” American West.

O’Sullivan’s explorations of the American West were done as part of different US Government-funded expeditions. Between 1867 and 1869, he was part of the Geological Exploration of the Fortieth Parallel led by Clarence King.

Afterwards, in 1870, he joined a survey team in Panama to survey for a canal across the isthmus, and then spent 1871 to 1874 in the southwestern United States, surveying west of the 100th meridian West under Lt. George M. Wheeler. O’Sullivan was one of the first to document the prehistoric ruins and pueblo villages of the Southwest. His photographic eye beautifully captured vast landscapes and settlements, and the photos he brought back are said to have influenced the likes of Ansel Adams.

Fortunately, thanks to the Library of Congress, we have access to many of these photos. Over 1,150 images of his are found on the Library’s website (complete with captions), some 295 of which feature the American West. Here’s a small selection of those photos:

Sadly, O’Sullivan lived a short life, dying of Tuberculosis in 1882 at the age of 42, shortly after returning from the southwest. The final years of his life were spent in Washington, D.C. as the official photographer of the U.S. Geological Survey and the Treasury Department.

To see the full breadth of his work, head over to the Library of Congress website by clicking here.

(via The Atlantic via MetaFilter)

Image credits: Photographs by Timothy O’Sullivan, courtesy of the Library of Congress

Enfojer: An Analog Darkroom for Printing Your Digital Smartphone Photos