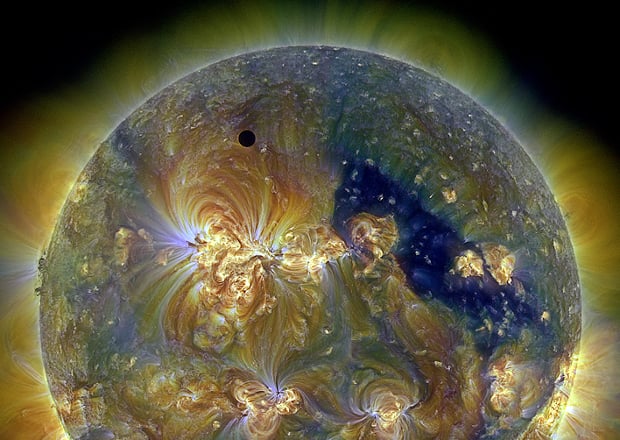 Last June, something happened that won’t be happening again until the year 2117: Venus eclipsed the Sun. Of course, seeing as Venus is both small and far away from us, the event wasn’t an actual eclipse, but rather a “transit.” The small dot that is Venus made its way across the Sun for the second time in 8 years and the last time for more than a century.

A lot of photos and time-lapses came out of that event — a couple of which we shared with you here — but this one has to be one of the most incredible we’ve run across.

Featured as NASA’s Astronomy Picture of the Day a week and a half ago, it’s a composite put together from photos taken by NASA’s Solar Dynamics Observatory’s Atmospheric Imaging Assembly camera. The SDO is the same spacecraft that captured this high-def time-lapse of the transit. 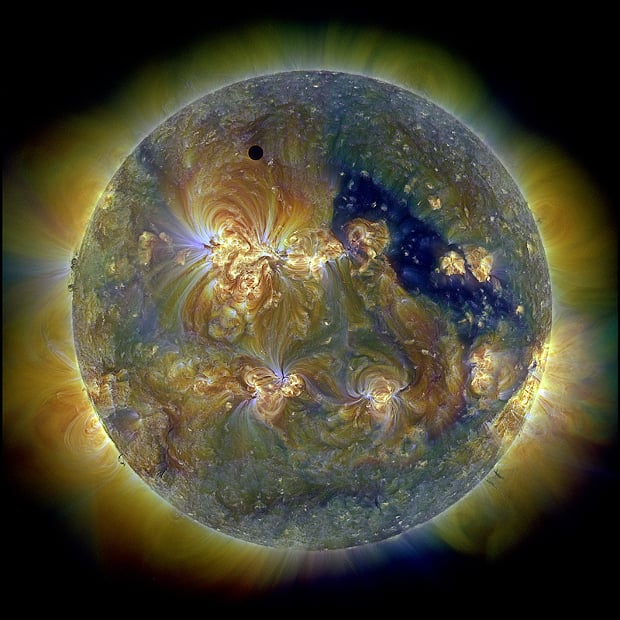 Of course, nothing like this photo was in that time-lapse, because this is actually a combination of three different photos put together by photographer Peter L. Dove. Dove combined photos taken by the SDO at three different wavelengths of ultraviolet light (171Å, 193Å and 211Å) and then assigned each of the wavelengths either red, green or blue.

“Since the Sun’s coronal gases are hotter than the 5800K (5500ºC) surface, they glow at ultraviolet ‘colors’ instead of the surface’s familiar white light,” explains Dove. “Coloring three different B&W images red, green and blue as if they represented visible light makes a sensible color image out of normally invisible light.”

What turned out was the stunning image above. If you haven’t already, be sure to click on the photo to see the high-resolution version. And if you’d like to relive the transit, check out our previous coverage here.

Photographer Reveals Why He Left Digital Behind to Study Alternative Processes