Earlier today, we showed you some of the impressive work the Photoshoppers of Reddit’s r/ColorizedHistory community have been putting together. In case you read that post and though “I’d like to try that!” the short tutorial above by 19-year-old r/ColorizedHistory contributor Mads Madsen is a great place to start.

Madsen is one of the top contributors to ColorizedHistory, and actually runs a Facebook page by the same name. His own personal website is chock full of examples of high-quality colorizations that range from Civil War portraits to the “eyes of hate” photo that shows Nazi propaganda minister Joseph Goebbels staring daggers at Jewish photographer Alfred Eisenstaedt.

In the short tutorial above (and the accompanying detailed text tutorial here) Madsen stuck to his favorite subject: the American Civil War. He narrates and tries to keep up as best he can while the sped-up video shows how he colorized an old black-and-white portrait of Union General Joseph Hooker.

Here’s the before and after: 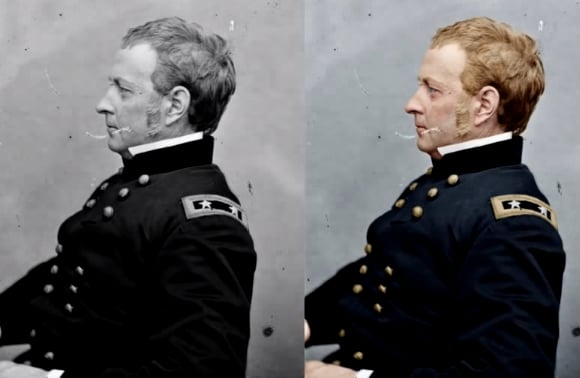 Unless you’re already very talented in Photoshop (and, for that matter, even if you are), the tutorial probably won’t turn you into a colorizing superstar by itself, but it’ll give you a starting point and a taste for the steps involved in colorizing a vintage photo.

If that sounds like something you’d like, be sure to watch the tutorial at the top or visit that previously linked text tutorial. And if you haven’t already, check out some of Madsen and his peers’ work by reading our previous coverage or visiting r/ColorizedHistory.

Q&A: What Should You Do If Your Photos Have Been Infringed?