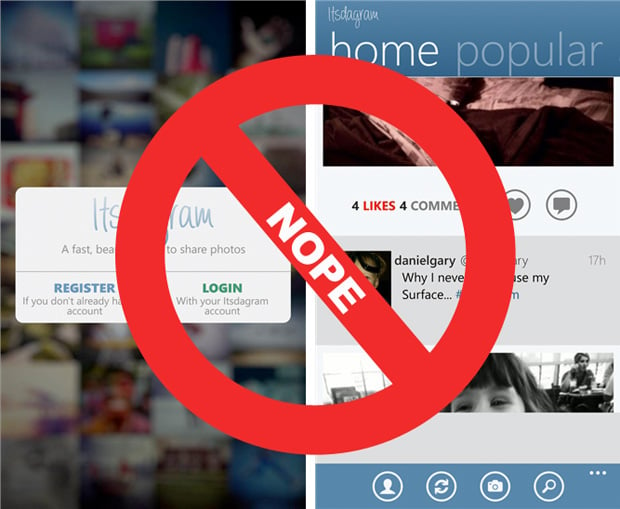 It would appear as if popular photo sharing service Instagram is potentially blocking the uploading of images through third-party app clients, such as Instance for Windows Phone 8, according to reports surfacing on the web.

Reports indicate that images uploaded by Instance users (for example) are disappearing shortly after being uploaded, which leaves Windows Phone 8 users (who do not have access to an official Instagram app, as it were) in the dust.

There’s a solid explanation behind the mysterious Insta-removals, however. A company representative has come forth with a statement supplied to The Verge indicating that the service “recently made an update to the systems that we use to fight spam to help prevent future attacks and increase security.”

Targets are applications operating and accessing outside of Instagram’s official API, which leaves third-party applications like Hipstamatic Oggl — which is officially supported by Instagram — in the safe zone.

“It’s their servers, their service. What I was doing was not approved by them and was using their private API,” says Daniel Gary, the developer behind Instance.

It could possible be a sign of an official Instagram app for presently unsupported devices, but until then, developers are scrambling to find a viable workaround.

(via The Verge via Engadget)

We recently made an update to the systems that we use to fight spam to help prevent future attacks and increase security. As part of this, applications accessing Instagram against the terms of our API may also be affected. This update does not specifically target any particular app or platform.

Goodbye to the Days of Point and Shoot