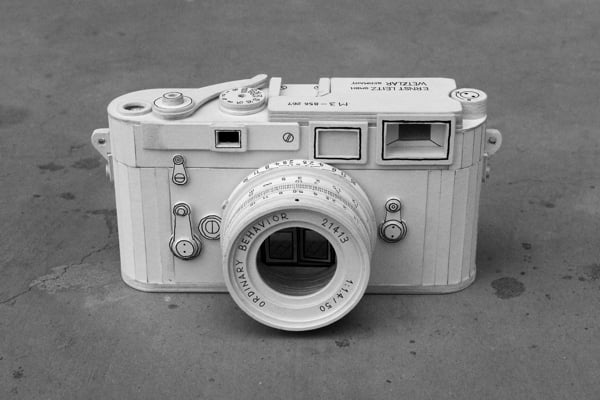 For his project “Ordinary Behavior,” illustrator and product designer Kevin Lck wanted to explore the relationship between humans and the technology that has become such a large part of our lives. To do so, he chose five household objects and set about creating special cardboard replicas.

One of those objects (although it doesn’t exactly quality as a “household object”) was a Leica M3, and his black and white rendition is impressive even before you turn it around. 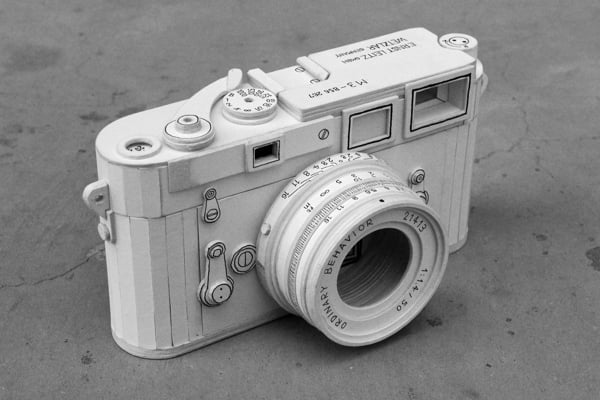 Once you do turn it around, however, you realize how Lck chose to illustrate our sometimes unhealthy bond to technology. The front, top and bottom of the Leica are all crafted to look as realistic as possible — but when you get to the back, you’ll notice a tiny room where the film should be. [The objects] appear to be everyday electronic appliances and devices that can be found in our domestic environment, however, their interiors are modified into miniaturized human scaled space. I seek to detach the audience from the real world temporarily, provide them with a space to rethink and reconsider the way we behave and think about the relationship between ourselves, objects and environment with technology in a more conscious way.

In addition to the Leica, Luk also crafted a microwave, television, iPhone and computer/keyboard/plug combo. To see them all, head over to his website and browse the photos under the links for Objects 0 through 6 on the left-hand side.