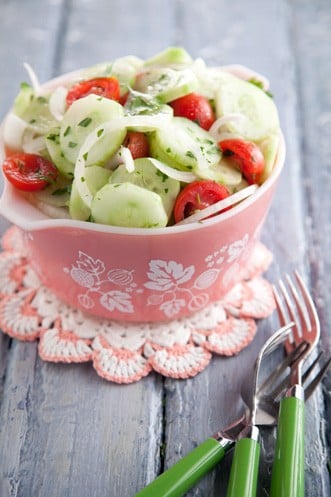 Is the photograph above the “perfect” Pinterest picture? It’s a simple salad photo that originates from TV cooking show host Paula Deen‘s recipe website. Since being published, it has been repinned 300,000 times and liked 8,000 times on Pinterest. A Philidelphia-based analytics firm believes that it’s the prototypical popular Pinterest photo.

Wired reports that Curalate has been building a database of scores of images shared on Pinterest, in addition to collecting information about how those images have been shared and liked.

Using that database — which amounts to millions of ‘pinned’ images — Curalate was able to identify key characteristics behind what makes a Pinterest image popular by sampling a half million or so of those collected pictures.

At the request of Wired, Curalate was asked to select one image that encompasses those very key characteristics that make a popular Pinterest image.

That image, shown above and titled “Aunt Peggy’s Cucumber, Tomato, and Onion Salad,” is considered, at least by Curalate’s analysis and research, to be the “perfect” Pinterest picture. 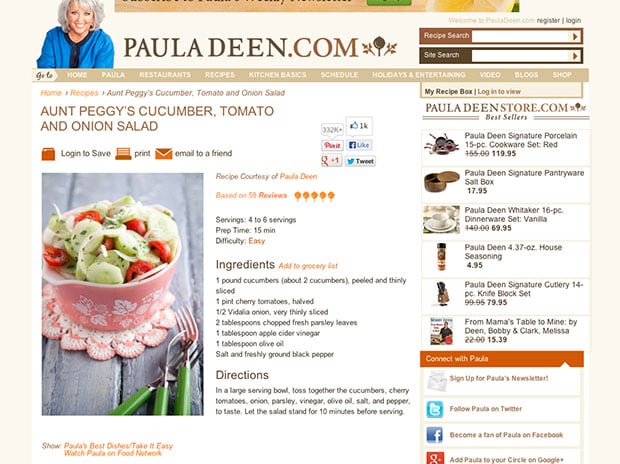 So what exactly is the definition of “perfect” by Pinterest standards? According to the Wired report, attributes of a popular Pinterest image include no human faces, a rather plain background, and multiple colors.

Images with a fair amount of red and orange colors apparently attract twice the amount of re-pins as an image without.

Orientation of the image is important, too. Portrait style pictures with aspect ratios between 2:3 and 4:5 are seemingly more popular than images in landscape orientation.

Using this information, analytics firms such as Curalate are able to assist companies with the multimedia they upload to social sharing websites such as Pinterest and Instagram, maximizing visibility.