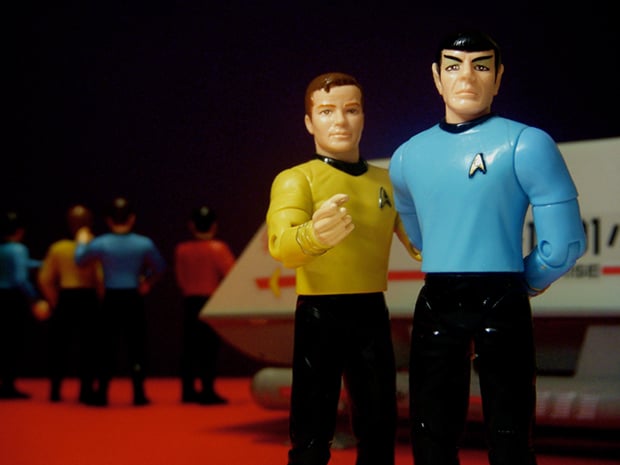 (Note: This is not an article about whom I feel is the better captain (Kirk). I mean, that would be ridiculous, because we all have our favorites (Kirk) and to bring up who I feel is the best (Kirk) really has no bearing on this photography column (Kirk). Just wanted to be clear.)

I grew up with Star Trek. By the time I was old enough to realize what it was, the show was well into syndication, but I watched every episode, sitting on the couch with my brother and eating Doritos. To this day, I can’t bite into a Dorito without hearing, “Space, the final frontier…”

I learned a lot by watching Star Trek: I learned that if I ever encounter a lizard man, I can defeat him with a bamboo gun and diamonds for bullets; I learned that any crew member on the Enterprise wearing a Red shirt is usually the first to go; I learned I was approaching puberty when I got kind of excited at the episodes in which Kirk ended up with his shirt off.

I learned to give all boyfriends the Trek Test prior to dating them: if they knew Captain Kirk’s middle name, they were green-lighted; and when I started in the photography business, the lessons I learned from the crew of the U.S.S. Enterprise would play a role in how I faced my challenges and ran my business.

So, what does Star Trek have to do with photography? In one word: everything. (Unless, of course, you think a photography business involves no more than clicking a button, in which case you and I need to talk.)

The understated messages of honor and optimism for the future are Star Trek ideals that should be present in every photography business, every photographer, and throughout our industry. And while we of the Trek-persuasion all have our favorite movies, it is Star Trek II: Wrath of Khan that holds a special place in my heart.

In fact, I am of the belief that watching Star Trek II: Wrath of Khan should be required prior to starting any photography business. Nikon and Canon should just include a DVD with each camera sold. There should be Wrath of Khan Photography Workshops.

Why? Because this second in the Star Trek movie series is a lesson in sacrifice, mistakes, loyalty and persistence. Plus, if you encounter a Ricardo Montalban look-alike, you’ll know what to do. Although the movie is sprinkled liberally with applicable lessons, the greatest of these is, inarguably, the Kobayashi Maru.

Although it sounds like a pricy sushi restaurant, it is actually the test given to all cadets training for command positions in Starfleet. The cadets are taxed with the mission of rescuing a disabled civilian ship, the Kobayashi Maru, which has drifted into the Klingon Netural zone; a zone Starfleet is forbidden to enter by virtue of treaty. (I just read that last sentence out loud and realized how truly geeky I sound. I’m pretty proud of this.)

The decision at hand is to either attempt a rescue and risk provoking a war with the Klingons in which your ship is outmanned, or leave the Kobayashi Maru and its passengers to their inevitable fate. Those that attempt rescue during the simulation find themselves on the receiving end of enemy hostilities and after a brief exchange of fire, the cadet finds him/herself unable to achieve victory and walks away defeated.

The Kobayashi Maru test was designed to determine the character of a cadet in a no-win situation. No one had ever beaten the Kobayashi Maru test, until Captain Kirk. As any Trekkie will know, his first two tests were met with failure, but upon his third attempt, he reprogrammed the computer to make it possible to rescue the civilians.

As the good captain explains, he didn’t cheat, but rather he “changed the conditions of the test.” Why? With a twinkle in his eye and swaggering optimism, Kirk simply replies, “I don’t believe in the ‘no-win’ scenario.” The “no-win scenario”. As photographers, we face it all the time in our businesses and for each of us, the scenario is different. We sit in the Captain’s Chair known as “Photography Business Owner” and survey the business landscape in front of us. Sometimes what we perceive as a lack of options makes us want to abandon ship. Or rock back and forth in a fetal position mumbling, “No more life lessons… no more life lessons.”

We look at the odds before us and fool ourselves into thinking we can do no better, so we end up doing what everyone else is doing. We make the same choices as the next guy. We figure the game is rigged and there’s no way to win so we don’t really try.

We also face our own Kobayashi Maru in the photography industry. We look around at an industry saturated with workshop givers and product sellers that resemble more a 2AM infomercial than a professional industry.

We can’t open our emails without being besieged with endless offers to purchase the “Secrets to Photographic Success” at a 75% discount, for a limited time, spread out over 3 easy payments.

We witness the phenomenon of Photographers-turned-Life Coaches and wonder what the heck happened? When did photographers stop teaching photography and start teaching how to organize closets or juice a salad?

Now, I’m not knocking healthy lifestyles and goodness knows I believe in education; but I think we’d benefit more from a good kick in the pants than yet another set of Photoshop Actions for sale. We eagerly run into the arms of those selling the sparkle and forget that the greatest teacher in our photography business is failure… disappointments, even criticisms.

As my beloved Kirk says in the highly underrated Star Trek V: “Pain and guilt can’t be taken away with the wave of a magic wand. They are the things we carry with us; the things that make us who we are. We lose them, we lose ourselves. I don’t want my pain taken away; I NEED my pain.”

I talk to photographers frustrated with the industry and/or their place in it who say, “Well, it’s just the way it is. Yeah, it kind of sucks, but there’s nothing we can do about it.” WHAT? Nothing we can do about it? Did you miss the part at the beginning of this article where I referenced Captain Kirk defeating Gorn, the lizard man? With a bamboo gun? And diamond bullets? Of course, it can be done and it starts with one easy action:

Simply: Refuse to accept “what is,” if “what is” isn’t acceptable.

Business not growing as you’d like? Refuse to accept it.

Worried about the state of the industry? Refuse to accept it.

Not meeting personal goals? Refuse to accept it.

Feel as though your creativity is in a slump? Refuse to accept it.

Find yourself in the middle of what others tell you is a no-win scenario. Refuse to accept it.

And… if anyone tells you it can’t be done, say, “Kobayashi Maru, baby,” give ’em a Red shirt, and send ’em on their way. Trust me, they won’t be back. 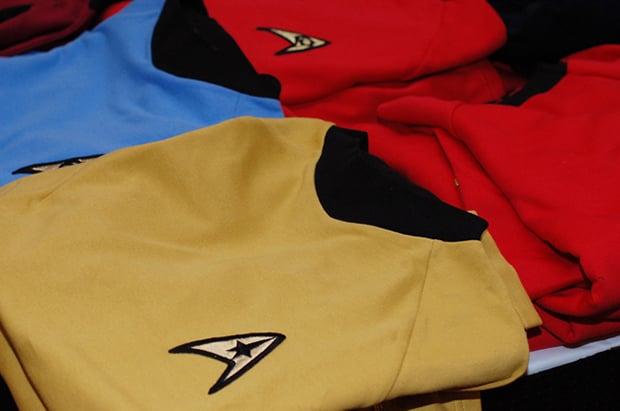