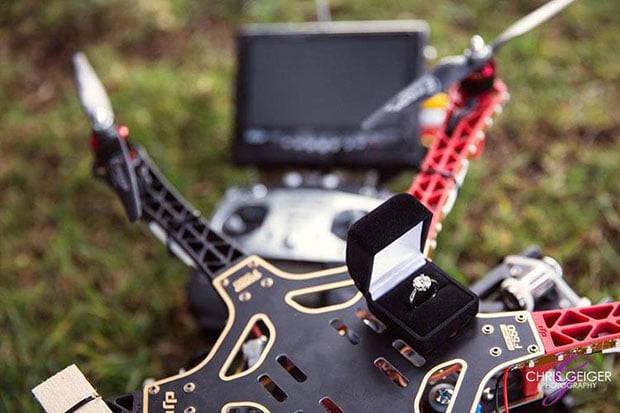 Aerial cameras based around RC helicopters are becoming widely used these days for all kinds of photographic and video-related purposes, but here’s one use that we’ve never seen before. An RC helicopter camera was recently used to both deliver an engagement ring and capture the proposal as it went down.

The plan came from the mind of San Francisco technology director and photography enthusiast Jason Muscat, who spent months brainstorming the perfect proposal.

He eventually settled on having the engagement ring delivered to his (then) girlfriend Christina Dam using an RC hex-copter. After hunting around for someone skilled enough to pilot the craft, he eventually found Fresno-based wedding photographer Chris Geiger. Geiger has plenty of experience in piloting RC helicopters.

After doing a dry run of his plan with Geiger on April 6, 2013, Muscat told Dam the next day that he wanted to shoot some photographs of her in San Francisco’s Alamo Square Park (you might recognize the location from a number of sitcoms, including Full House).

During the photo shoot, Muscat used his 5D Mark II for video recording rather than photography in order to capture Dam’s reaction. There was also an additional 5D Mark III on the ground capturing what went down.

As Muscat was “taking pictures,” Geiger stuck the ring into the box on top of the helicopter, flew it a couple of blocks to where the couple was standing, and landed it perfectly nearby. Muscat writes,

It was nerve-wracking to place the bling in the hands of a stranger, especially one who intended on flying it around among trees and buildings. Chris was an absolute pro, piloting and landing the drone copter perfectly. He also edited the video which came out terrific.

Muscat definitely put a lot of faith in Geiger’s piloting skills. Just yesterday we shared about how a photographer in Ohio had accidentally gotten his helicopter camera stuck in the arms of a statue at the top of a courthouse.

There were two cameras mounted to the helicopter (a GoPro Hero3 and a 808 keychain camera), and Geiger managed to land the helicopter with the camera pointed straight at the couple, allowing it to continue recording the actual proposal as it happened. 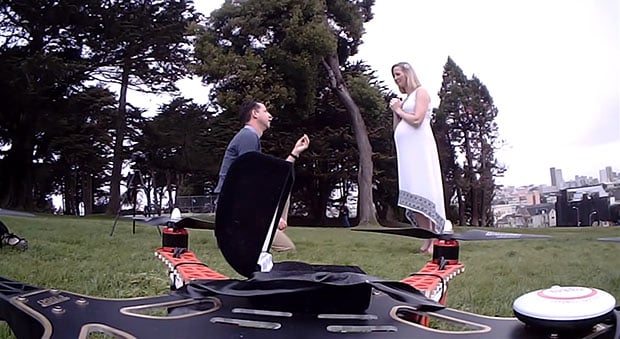 Here’s the final edit video that shows what went down from a number of different camera angles:

Muscat says that everything “came off perfectly,” and that they now have a “great memory to look back on for the rest of our lives.”

Thanks for sending in the tip, RC Heli!

Tip: Generally Only Share About 5 Photos From Any Set of Pictures