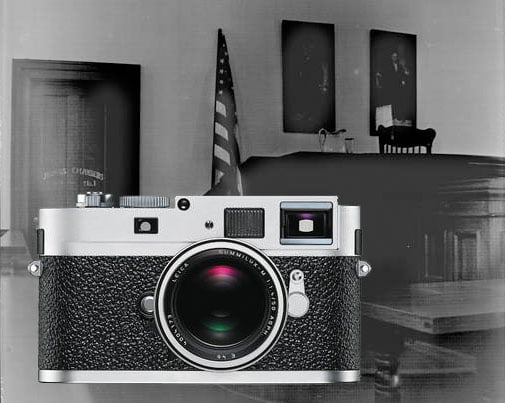 If you’ve ever shot with a Leica M rangefinder, you probably know how effective the camera can be for stealthy shooting. After all, there’s no mirror that needs to swing out of the way like there is in a DSLR, so the main sound you’ll hear is the soft click of the shutter curtain flapping open to expose the film or sensor.

It’s not just Leica aficionados that appreciate the silent shutter: did you know that the Leica M is held as the standard for silent photography in courtrooms across the United States?

Not more than one still photographer, utilizing not more than two still cameras with not more than two lenses for each camera and related equipment for print purposes shall be permitted in any court proceeding. Such cameras shall produce no greater sound than a 35mm Leica “M” Series rangefinder camera.

The Minnesota court’s “General Rules of Practice” document has a nearly identical section: 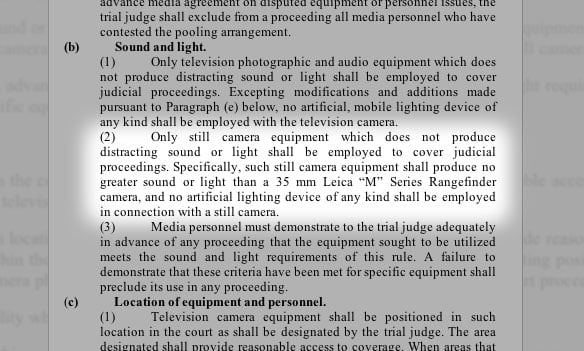 Courts in New York, Rhode Island, and Louisiana have the same rule. We’re guessing other states do as well.

As technology changes, however, we may see the camera-specific rule get wiped from the guidelines. Updated versions of the document in some states — including Virginia and North Carolina — have already scratched any mention of the “Leica M” line from their rules. In its proposed rule change that eliminates Leica M from its document, Florida said it was trying to “eliminate references to outdated technology.”

So, don’t worry: if you’re aiming to shoot photographs in a courtroom (where photography is generally off-limits), you don’t need to go out and buy yourself a Leica M camera. But at least now you know how quiet the camera you do use should be in order to not tick off the judge!

Time-Lapse Documents a Backyard Tree Growing Up Over Five Years