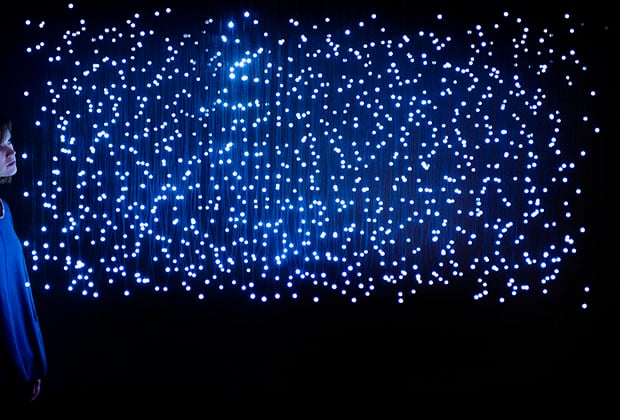 From most angles, it looks like a bunch of lights flickering at random. But stand in just the right spot, and you’ll perceive moving bodies. Jim Campbell’s installation for Light Show – a new exhibition at the Hayward Gallery in London – is a powerful antidote to the high-tech obsession with performance, the endless competition to pack more megapixels into a smaller screen or sensor. It also provides fresh insight into human vision.

For the past couple decades, Campbell has applied his training in engineering to a question that would bewilder the typical engineer: What’s the minimal resolution of a recognizable moving image?

Comprised of approximately 1000 hanging lights, Exploded View (Commuters) – illustrated above – shows that you need surprisingly few. In fact, the sense of presence is heightened as the resolution decreases.

Researchers sometimes speak of an “uncanny valley” effect when computer animations get to be uncomfortably lifelike. Campbell has found a whole new gully in the uncanny landscape.

One explanation for the haunting effect may be that his shadowy image resembles peripheral vision, entering into our awareness from around the bend.

Equally significant, though, is the physicality of his installation: the fact that the moving figures become visible and disappear again as you move around the room. In other words, your relationship to these images is lifelike, an embodied vision.

It’s just the liveliness you’re liable to miss if you see the world through your iPhone screen.