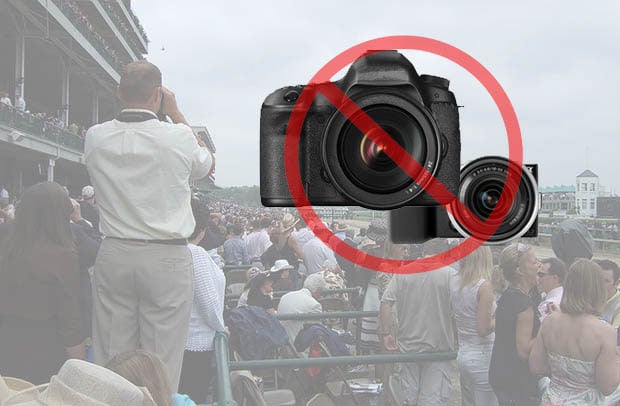 If you’re planning to attend the Kentucky Derby early next month, you might want to make sure you’ll be content with capturing your memories with a smartphone or point-and-shoot. Churchill Downs, the racetrack that hosts the famous horse race, has unveiled new security measures that will prevent attendees from bringing certain items onto the grounds. Among them: all interchangeable lens cameras.

In addition to interchangeable lens cameras (e.g. DSLRs, mirrorless cameras), the guidelines also prohibit any camera that has a lens longer than 6 inches, tripods, and camcorders.

The policy reflects a common prejudice against “professional” style cameras. It’s interesting that a $629 entry-level Canon Rebel (a crop-frame camera) with a 18-55mm kit lens will be banned under the new policy, but a professional $2,800 Sony RX1 full frame compact camera will be perfectly acceptable.

Small cameras, but none equipped with detachable lenses or lenses more than 6 inches;

It looks like you might want to pick up a telephoto lens for your iPad after all. Oh wait… that lenses is nearly 8 inches long. Is that allowed?…

(via WBRB and USA Today)

Thanks for sending in the tip, Keith!

Image credit: Photo illustration based on standing up to watch the ponies by gavinrobinson

If You Use a WD My Book Live Hard Drive, Unplug It Immediately

You Must Pass the FAA’s TRUST Test to Legally Fly a Drone in the U.S.

A Detailed Tutorial on How to Pose Couples During Photo Sessions