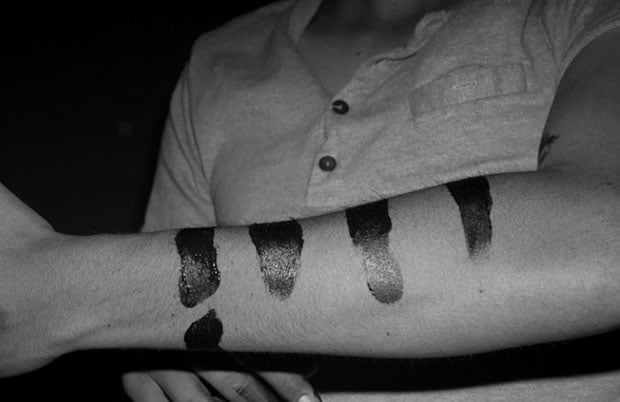 Typical photography exists around the visible spectrum (think of the rainbow), but cameras are also able to pick up other wavelengths of radiation. Ultraviolet radiation, as the name suggests, comes after the violet section of the visible spectrum so is not visible to our eyes. However, some animals (birds, for example) are able to see UV.

UV reflectance photography essentially is recording the UV radiation which is reflected back from a UV source. A UV source emits UV radiation, and this is often referred to as UV light. However UV light does not exist, since light is visible and UV is not! UV reflectance is a fairly involved and arduous process without specialized equipment, however the results can be very rewarding.

Why would you want to use UV reflectance? Try shooting someone’s face, then covering it with high SPF sunscreen. Alternatively try imaging some flowers as the patterns visible may differ. 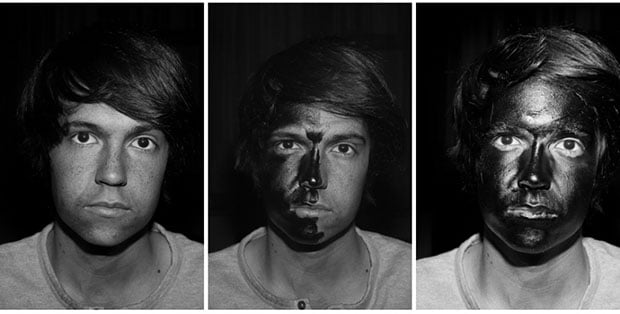 The above photo shows a series of portraits of me under UV illumination. The UV record shows the effectiveness of the SPF50 sunscreen (made for babies) at absorbing UV. The clean face shows the damage to my skin from the sun (it shows up freckles I never knew existed).

With the specialized equipment, this is fairly simple. The camera is used the same way as a typical DSLR: mount the flash to the hotshoe of the camera and fire away. The exposure metering appears to be fairly accurate, but using the histograms to judge exposure is probably your best bet. Using manual on the camera is also probably a good idea.

The flash should be pointed at the subject. As the converted camera contains the UV pass filter on the sensor, the viewfinder is still useful and the sun could also be used as a source of UV.

For accurate UV recording when looking at skin etc. use a darkened room and a dark background, this will give a greater contrast.

The files should be processed in Photoshop or Lightroom and converted to black and white, as the images will have a very purple cast — no colour information is recorded in UV as you are imaging UV and not visible light, which contains colour.

Although I’ve not actually done this, I know of some people who have had success shooting UV reflectance using Ilford HP5. This process is much longer and requires a fair amount of bracketing of the exposure.

First, the source should be set up. If using flash, set it to full power at a distance which is comfortable with your subject (high power flash is very bright and fairly warm). The flash should be triggered using a sync-lead or alternatively radio triggers. Tungsten light offers a good source of UV however the exposure time required will be significantly longer so a sharp image will be harder to obtain.

Next, the camera should be loaded with a black and white film. A high ISO should help more – try out Delta 3200 or HP5 (ISO 400) from Ilford. Obviously, a high ISO film will give more grain, so there is a trade off between sensitivity and image quality. 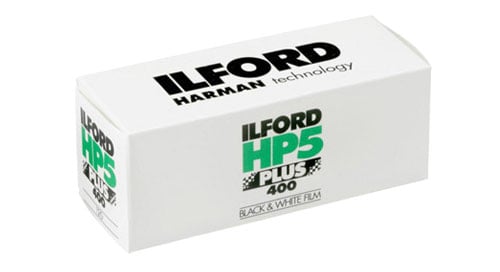 As a flash source is being used, the shutter speed should be around 1/60th of a second, as high powered flash (such as the 3000 watt second Elinchrom Classics) often has a fairly long flash duration. A tripod may be used to steady the camera.

There is some focus differential when doing UV reflectance photography, photographic lenses are designed to focus visible light not UV radiation, therefore shooting at a large aperture gives a higher chance of obtaining a sharp image.

At this point, things have been fairly standard. Then comes the light metering: the UV pass filter should be held over the photocell of the light meter (if the light meter has a dome, remove it). This will give a very, very rough indication of the actual UV exposure, so bracket, bracket and bracket. For example, if it suggests f/11, try a range of exposures from f/8 to f/16.

The film then needs to be developed. Black and white is often processed by hand, so if you have access to a darkroom and the know-how, do it yourself. If not, look for a place that can develop the film for you and save your self a bit of work!

If the images are underexposed – replicate the setup and add more light or open up the aperture on the camera, if they’re over exposed do the opposite. Ensure you use the same lens as a different lens may give a totally different exposure. Getting some interesting shots might take some trial and error!

About the author: Thomas Langley is a photographer based in the South East of England who specializes in wedding and portrait photography. Visit his website here. This article originally appeared here.

Woman Photoshops Herself and Her Cell Phone Camera into Historical Photos