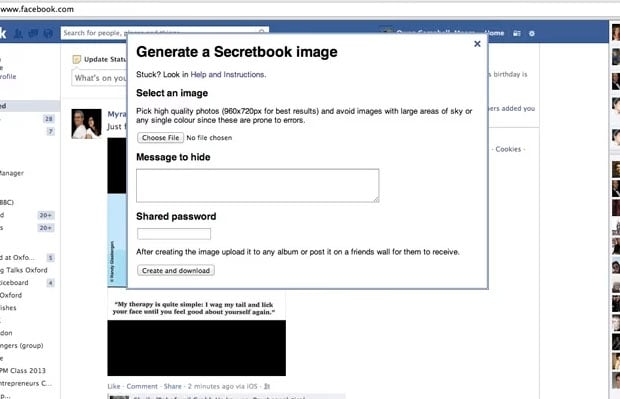 Steganography is the art of passing secret messages in a way that most observers wouldn’t detect even though the message is in plain view. Unlike cryptography, which attempts to transmit messages as nonsense, steganography uses security through obscurity, relying on the fact that most people aren’t looking for secret messages in ordinary things. Passing notes in invisible ink would be one example.

Owen-Campbell Moore, a computer science researcher over at Oxford University, has been developing a method for passing secret messages through Facebook photo sharing.

Moore has developed a new Google Chrome extension called Secretbook that can embed messages into photos through a simple web-based form.

Photographs that are encoded with messages — up to 140 characters each — look nearly identical to their original forms. The secret messages hidden within the pixels of the photograph can be turned back into text form using a password shared between the sender and the recipients.

Here’s a before-and-after comparison of an ordinary photo and that same photo carrying a secret message: 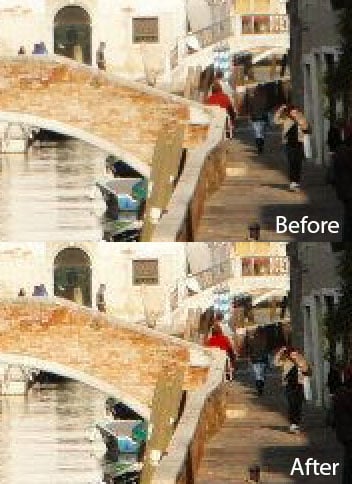 In his research paper detailing how he went about creating this system, Moore writes,

This application is particularly relevant at the moment since the Arab Spring of 2011 showed how wide spread use of social networking sites can be important for groups to plan uprisings and many governments are now investing heavily in systems to both access and parse messages shared on social networking websites.

Just to be clear, steganography using photographs shared through the web is nothing new, and it’s not particularly difficult. Here’s an example in which a photo of a cat is hidden within a photo of a tree (Wikipedia writes that the “hidden image is revealed by removing all but the two least significant bits of each color component and a subsequent normalization”): 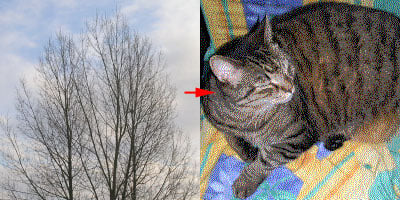 What Moore has done is make the technique doable through Facebook, which uses recompression algorithms that destroy ordinary photo steganographs. To overcome this problem, Moore recreated Facebook’s compression inside his process, which keeps the message intact when photos are uploaded to Facebook servers (Google+ on the other hand, can receive and display steganographs without a special app).

If you’d like to get started with sending out 140-character secrets through your Facebook Timeline, head on over to the Google Play store to download Secretbook.

Radical New Concept Hyper-Simplifies the Camera as We Know It