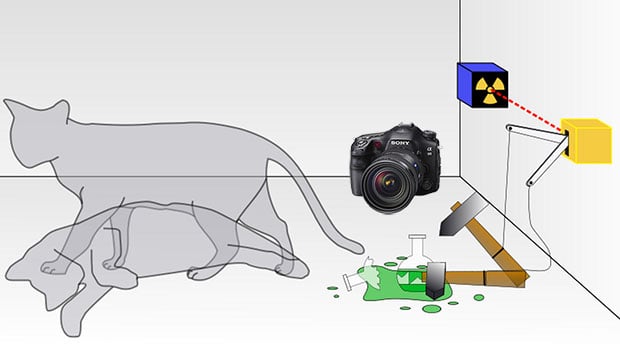 A camera can be many things. A tool, to produce an image. A bridge, to start a conversation. An observer, to record an event, or bear witness to something. A shield, to distance and separate the photographer from the scene he or she is attempting to capture.

There’s a big difference between being part of the action, and just being a witness to the action. Which do you think makes for stronger images? Unquestionably, the former. However, it’s not that simple: photojournalism is like quantum mechanics.


Let’s take a little detour. Quantum mechanics 101: under the quantum mechanical realm – i.e. the very small – an observable event has no distinct state, but rather a continuum of probability. This means that there’s the potential for any possible outcome to our observable event; however, until we observe it, we don’t know what the outcome will be. However, the very act of observing the event changes the outcome – because once the outcome has been observed, it can no longer be any of the other possible outcomes. This changes the probability continuum for the event, thus changing the event itself.

The best example of this is Erwin Schrodinger’s cat thought experiment. A box, which contains a live cat, has a lid that triggers a mechanism that might kill the cat. So until you open the lid of the box, you don’t know if the cat is dead or alive; by observing the cat, you interfere with its state of being: namely, you might kill it by checking if it’s really alive or not.

Back to photography. As a photojournalist, if you are an observer, you do not generally interfere with the course of events – aside from any secondary impact arising from people viewing your images, and possibly taking action or interfering with the course of history.

However, if you are a participant rather than an observer then by taking photographs, you are directly interfering with the event. From a photographic point of view, it means that the images you get may be more powerful, but not necessarily as genuine because the subjects are aware of the camera and will almost certainly change their behavior accordingly, which again changes the image and changes the course of events because the subjects change the way they act around the camera. As a stealth operative, you will capture the natural reactions of your subjects – but at the expense of involvement for the viewing audience.

They’re very different types of images, and both have their advantages and disadvantages – to say nothing of the ethical dilemmas posed for a photojournalist when covering certain events, for instance wars and natural disasters. I can’t say whether one is better than the other, but I do know that it’s much more difficult to get powerful images if you are not a participant – simply because the focus of the subject is not the camera.

I’ve always felt the best compromise is to be an observer, but an active one: anticipate and seek out your targets; study behavior and be ready for what comes next, so when that one fleeting moment of critical action – what HC-B memorably termed ‘the decisive moment’ – you are ready, and manage to capture it.

There are times when you should not be a passive observer. In intimate social situations, for example, hiding behind your camera would just come across as awkward, antisocial and downright rude. Portraiture is another example. People naturally connect and express emotion more easily when there’s another human on the receiving end, rather than an enormous and intimidating piece of glass attached to a big black camera.

Perhaps this is why smaller cameras such as the compact system cameras and rangefinders are seeing a modern resurgence (aside from the obvious size and weight benefits) – they remove a layer between you and your subject in a couple of ways.

I have no problem shooting in very close quarters with a good point and shoot or mirrorless camera – the Ricoh GR-Digital III and Olympus Pen Mini are my favorites because of size and responsiveness – and to a lesser extent, the Leica M9-P. The full-sized Nikons are a no-no (especially anything with a battery grip or large aperture lens) unless you’re in a public situation where the expectation is a lot of people will have cameras and be taking photos.

Speaking of expectations, this should be a good guide to what equipment and technique is best suited to get the best images: if you’re expected to look and play the part of a photographer – a fashion shoot, for instance – using a small camera so the model can see your face probably isn’t going to get you the results you desire. If you’re trying to be stealthy and cover an insurgent protest, then a point and shoot probably is a good idea to help you keep a low profile. Street photography is something else that’s best done with compacts, too. Bottom line: take your cue from your subjects.

One final word: if you are not comfortable, then it will show in your body language. Remember, most communication is nonverbal: this means you’re also going to make your subjects aware of your discomfort (and probably also make them feel uncomfortable with the situation). Most important tip: be confident, regardless of whatever your equipment choice, and however you chose to shoot. Photographers create images: appearing the part is a very important piece of the puzzle.