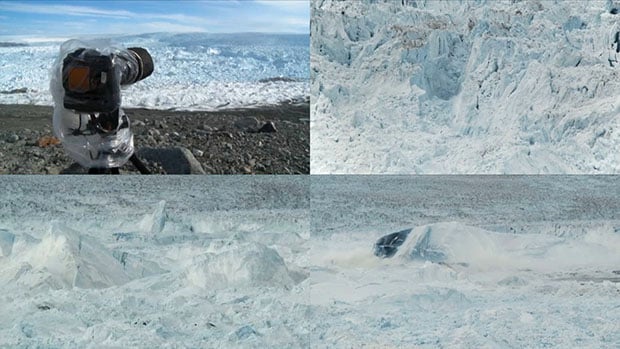 We’ve written about photographer James Balog’s documentary film Chasing Ice a couple of times in the past. His team spent years shooting time-lapse photographs of glaciers around the world using solar-powered Nikon DSLRs, which allows changes over a long period of time to be seen in just seconds or minutes.

One particular scene in the movie shows an epic event: the largest iceberg breakup ever caught on camera.


Here’s what the team says about the 75-minute event, which is known as ice calving:

Pieces of ice were shooting up out of the ocean 600ft and then falling. The only way that you can really try to put it into scale with human reference is if you imagine Manhattan, and all of a sudden all of those buildings just start to rumble and quake and peel off and fall over and roll around. This whole massive city just breaking part in front of your eyes.

Here’s the 4-minute clip, courtesy of The Guardian:

Since the video only shows landscapes of ice and water, it’s difficult to get a sense of the scale being depicted. The text helps give a slightly better sense, though… those moving chunks of ice are absolutely massive.