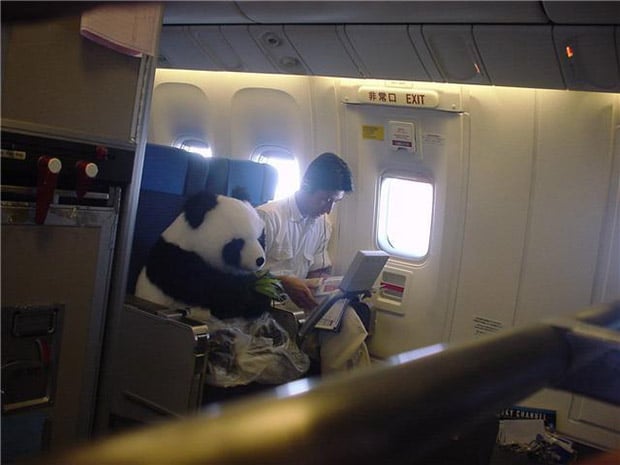 Here’s a photo that’s currently going viral on the web. As with many other viral photos, it’s being shared with all kinds of different descriptions, and people are simply passing it on to family and friends without bothering to verify whether or not the captions are real.

The photograph appears to show a panda cub sitting in a seat on a plane. Here’s a “press release” that was supposedly published alongside the image by China Airlines:

China Airlines is a proud corporate sponsor of the panda snactuary at Cheng Du and was happy to help out recently with the transfer of a young panda cub to a zoo in the United States of America.

After extensive consultation with the Sanctury’s veterinary staff it was concluded that the importance of the panda cub precluded it from traveling in the hold of the aircraft, where attending to its needs would be difficult. Thus China Airlines agreed to donate seats in its Business Traveler First cabin for the panda cub named Squee Squee and his carer, Fu Jiang Lang, seen here sitting in the window seat.

In the interests of hygiene Squee Squee wore a plastic nappy to take care of pandapoop during the flight. We are happy to report that Squee Squee arrived rested and relaxed after his 14-hour flight, and is settling into his new home well. During the flight we can report that he didn’t watch any of the flight movies as we couldn’t find a headset big enough for him. He did order the bamboo from catering menu, with a side of bamboo, and bamboo mousse for desert.

By the time you get to the third paragraph, it’s pretty clear that this widely published description is fake.

However, other publications (e.g. BuzzFeed, Archie McPhee) have published versions of this humorous text that only includes the first two paragraphs, and have believed it to be true.

This same thing happened back during Hurricane Sandy, when all kinds of ridiculous photographs were circulated by people who thought the images showed the storm’s devastation.

The takeway: don’t believe everything you see and read, especially when it comes to cute viral photos.