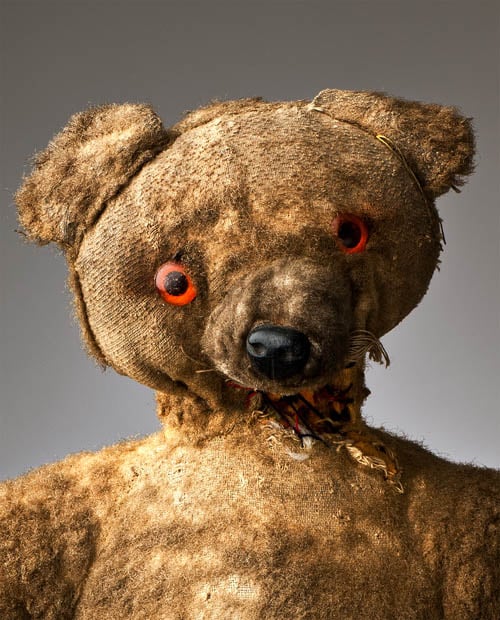 Ireland-based portrait photographer Mark Nixon has an interesting project titled “MuchLoved” that features 30 portraits of teddy bears that have been disfigured from years and years of love. The well-worn toys show battle scars of being the prized possessions of children — cherished companions that have seen many a repair as different parts start wearing down. They may look hideous to our eyes, but each one is beloved by its owner.


The portrait above is of 48-year-old Teddy, who’s owned by a woman named Suzanne Carney.

This is Brownie, world traveller, party animal and much misunderstood by all except his best friend Jenny. Brownie has seen the world from Maui to Montauk, Bangkok to Ballsbridge. He has travelled on planes and trains and has even been known to take the bus by himself from Longford. During his early years in Cavan he suffered much adversity at the hands of his evil step sisters and the family cat. But he overcame all to make his escape to the big smoke at the tender age of 17years. Unfortunately this wasnt the panacea he had hoped for and during his college years he was ostracised by his fellow students in UCD who jeered him for his unusual appearance and distinctive aroma. It is true that Brownie never washes, but therein lies his special powers. To those most important to him, his subtle musty bouquet has the power to comfort and reassure. His battered and worn fur is soft and calming to the touch. Now at 30 years of age Brownie shows no signs of settling down. He lives an alternative lifestyle sharing a bed with Jenny and her husband in Milltown and is old and wise enough not to care about what anybody thinks of him anymore! –Jenny

Daragh’s father was given one pound by his parents when Daragh was born and he bought Teddy with it. He is held together with tights and in Daragh’s words, she kissed all the fur off him.

Louie still has track marks on him from the time he fell off a train.

Over the years, Teddy has undergone several changes. When it debuted on “The Trouble with Mr. Bean”, it had a smaller head. Two episodes later, its head reached its current size, but its “eye” wasn’t present until Bean placed gold thumb tacks on its face. The “eyes” have since been replaced with two small white buttons sewn over Teddy’s face, giving it a distinct image

You can see the rest of the photos from MuchLoved over on Nixon’s website. They’re also on display at an exhibition at Nixon’s studio. The show runs until December 1st, 2012 at 62 Clontarf Rd Dublin 3. Tues-Sat, 10am-5pm.

Image credits: Photographs by Mark Nixon and used with permission