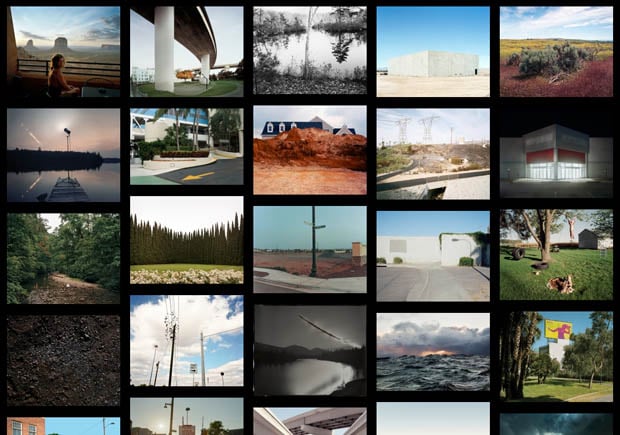 Andy Adams of FlakPhoto has an interesting new digital exhibition titled Looking at the Land — 21st Century American Views that features 88 landscape photographs captured around the United States since 2000. What’s neat is that each of the images is accompanied by an explanation of “why” it exists. Adams asked each of the photographers the same questions, with the main one being, “Why did you photograph this place?”

This photograph was taken at first light near Otter Cliff in Acadia National Park, Bar Harbor, Maine. It is an area of extreme ruggedness, strewn with rocks formed thousands of years ago and shaped by glaciers moving across the land. The sea has pounded them, eroding and cracking them against each other over a span of time that we can barely comprehend. As the golden tones of the sunrise glistened over the space, I stood alone with my camera set on tripod, taking in the fleeting beauty of that moment with all the urgency a photographer can feel. Along with the immediacy of the scene, though, I simultaneously found myself struck by its immense scale and the countless centuries that had to pass in order to forge it. It was awe-inspiring.

I created this particular image in a dry river bed (wash) and angled the mirror towards the stars. This area is at a high altitude around 3,500 feet and has very little light pollution, so the night sky was particularly vivid. While I was making the photograph I remember thinking how strange it seemed to see the cosmos restricted by the edges of the mirror. It’s impossible to hold a frame to something as great and vast as our universe.

This place is one of personal significance to me. It’s on Hopkins Pond in Maine, the site of my family’s summer cabin. It’s a place to get away from it all, to be next to nature and to reflect upon life and one’s place in the world. I was hoping to use my studio flash to attract clouds of bugs to its light. Then, if all went as planned, I would fire the flash dozens of times to fill the frame with tiny glowing particles. I had envisioned the bugs hovering in air like diamonds, similar to previous work created in blizzards over the past few winters. The more I make work the more comfortable I am with failure. In this case I was quite let down when I saw no trace of bugs whatsoever, let alone filling the sky and air before the camera. (I’d still like to make that image someday.) I put the image away for a few weeks, when I returned to it still a little sore from the initial failure I saw that something else had occurred that night. I had photographed the moon several times at decreasing intervals of time on the same sheet of film in an attempt to create an interesting event in the sky. I love how simultaneously epic and naive this appears — as if I would be able to create a stroboscopic study of the moon with a man-made piece of lighting equipment.

I made this picture because I was in New York, looking to make an image of a place where people congregated around a body of water. It was Labor Day, so I knew there would be a lot of people at this pool in Queens. I wanted a swimming pool because the bright blue color would contrast well with the gray color palette of the city. I wanted to take this picture because it was a situation where there were many people gathered in one place relaxed, happy, and connecting with one another. I think that being in nature, or environments that mimic elements of nature, have a relaxing and joyful affect on many people. It’s necessary for humans to spend time in natural environments because it is an opportunity for our minds to function without the incessant influx of communication from cell phones, advertising, computers and modern amenities. I think that it changes our mental, physical and spiritual state of mind and I always try to visually depict this through my landscape work.

I made this picture while working on my Consumed series, which looks at America and its relationship to fast food. I was looking for images that showed daily life and the ubiquity of fast food iconography on the landscape, how we are always playing in the shadow of the giant.

The circumstances surrounding the creation of this photograph are quite different from much of the work I had created in the previous year in the southern part of coastal South Carolina. On February 13, 2010 my sleeping body was rattled awake and thrown out of bed by my good friend in encouragement to drive south from Charleston, South Carolina and photograph the snow that had covered the ground the night before. It was my birthday, and my friend and I had been up celebrating late into the night, enjoying the snowfall that hadn’t dropped like this in twenty years. I had asked him the night before to make sure to get me up at 6 a.m. so I could make some photographs. I groggily traveled 90 minutes south to Edisto Island and drove around making exposures for a few hours until the snow had melted completely away. I stumbled upon this particular place, drove past, and made the typical reverse maneuver to take another look. Some happy fellow had made a perfect circle in the snow. I thought this was a terrific example of the free spirited, fun-loving personalities of the people who live in this area.

This photograph was taken in Anaheim, California right after a big wildfire that swept through the area in 2008. The riverside community park was completely burnt by the fire but at the same time the park was still functional once the fire had been contained. People immediately came out to the park, some in curiosity, others for their usual walk and exercise routines. Eventually, the fire and its impact became an integral part of the park.

It’s difficult to pass by 45 miles of sand and not be compelled to make a picture. I had been to this place a number of times before and always photographed it, but never felt satisfied with the results. This particular image seemed different to me — it was so reductive both in content and form, that I feel like it’s not a picture everyone would see or make. It definitely reflects my attitudes about the relationship between nature and culture and is emblematic of the way I usually see that relationship, which is to say, deeply connected.

Normally I search for a particular location, light or structure, but this was spontaneous. Big clouds mesmerize me, so I was looking in that direction and as I rounded the corner I saw this image. I slammed on the brakes in the middle of the road to get a better look and promptly found a place to park as I scurried for my camera. I do most of my shooting in the evening, but I happened to have my camera with me that day, just in case.

My family and I were driving to Indiana to pick up our new puppy, Miles. As we were driving along US highway 30, I spotted a deer hanging in a tree. I immediately pulled over and walked up to the person’s house to introduce myself and ask permission to make a picture. My wife and daughter are used to me doing this and also got out of the car to walk around. As I was making the picture, the owner came out and asked me why I was so interested in this. We talked for about an hour, and as we were leaving, he gave me several venison steaks, sausage and stew meat. I learned a lot that day. I revisited a year later to give him the picture and was sad to learn that the family had moved away without leaving a forwarding address.

You can browse all 88 photographs in the exhibition and their stories here.

Image credits: Photographs by their respective artists and used with permission