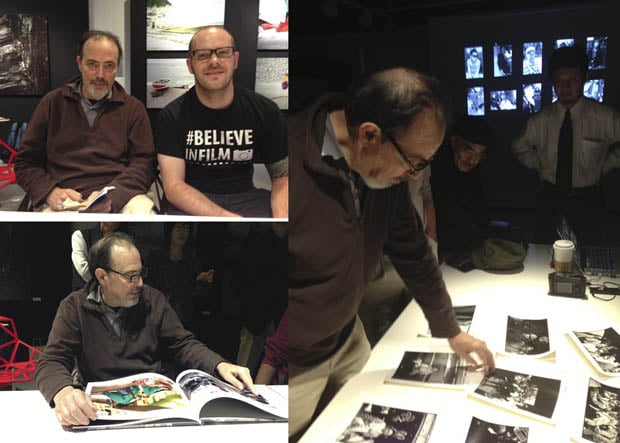 Bellamy Hunt over at Japan Camera Hunter has a fascinating account of what it’s like to attend a photography workshop taught by famed street photographer Bruce Gilden, a “famously outspoken photographer who does not mince his words”:

[Gilden] has no love for camera geeks and when he was told I am one he was not overly impressed, as he said “it is merely a tool, a box” […] Gilden tests you, and when he asked me a question that I was unsure of the answer and tried to bluff my way through to he called me out as a bullsh*tter (true though, my fault really). Gilden likes to ask direct questions, and one of his first was “Do you want to be a photographer?” I replied in the affirmative, to which he said “why?” I was not really able to explain why in a direct manner and he pounced! “So why did you bother coming?” […] He then told me that if I was looking for inspiration or a kick up the ass then I was in the wrong place as I would not get it from him, it must come from me (which is actually a fair point).

At this point Gilden asked to see my work […] I had not really been able to put together a coherent selection of my work and Gilden pointed out that fact. In fact I think his words were something to the tune of “Sh*t, sh*t, sh*t. What were you thinking? This is no connection. You are lazy”. At first I was hurt and offended, but after a few minutes of thinking about this (while he tore into someone else) I realised that he was right. I have been lazy and I have not thought out my work properly in the past. I have been coasting along and not putting the effort into it that I could be […] So after tearing myself and the other students a new one I was set a task by Gilden.